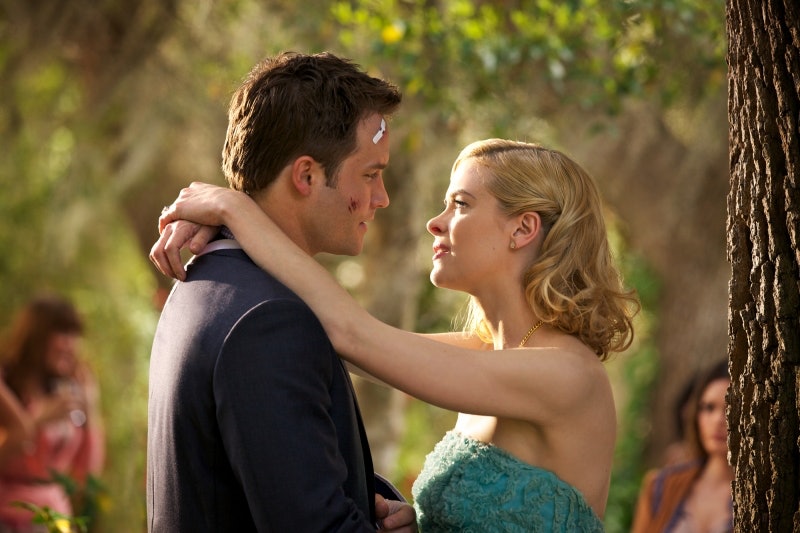 On The CW’s Friday night soap Hart of Dixie romantic relationships abound. Almost every character on the show has a counterpart — Zoe and Wade, Annabeth and Lavon, heck even Earl and Mary Ellen. But what about the one Bluebell couple that existed at the beginning: George and Lemon? Considering all that they’ve been through together, are they really meant to be?

Lawyer George Tucker (Scott Porter) and southern belle Lemon Breeland (Jaime King) have gone from being engaged and everything in between before settling on being friends with benefits. Both of them cheated during their engagement in the first season; Lemon physically cheated with Lavon and George emotionally cheated with Zoe. Most people would take that as a sign that they aren’t meant to be, but since it’s a small town, George and Lemon haven’t had the luxury of really existing apart from each other. They’ve had run-ins and random hook-ups, which are both spicy and memorable. But is that because they are meant to be or is it a sign that one of them needs to leave town?

There are at least three reasons why George and Lemon don’t belong together, why their recent hook-ups are really more about convenience than anything else. Let’s review.

This is a serious question. George from the first season and the current person impersonating first season George are not the same person. It’s not that Scott Porter has spontaneously forgotten how to act. Rather it seems like the writers lost the file containing his character’s development outline and left him alone to interject himself in random plotlines around town without any real consequence. Wade has graduated to become a mature adult and George has found himself in a never-ending loop of silliness. This can’t be the same guy that Lemon got engaged to, and it would be a step backwards for her to accept this version of him.

Lemon is fine & focused on her work

Despite what her grandmother thinks, Lemon’s recent attention to her work isn’t a sign that she’s completely given up on love. Nor does it symbolize that she’s so depressed with her current lack of a beau that she’s opted to throw herself into work. She has found an arrangement that works for her and allows her to have somewhat of a sex life and succeed in her professional one as well. She’s finally coming into her own, finding who she wants to be and looking for ways to excel. Adding George into the equation on a permanent basis would only distract her and lead to her sole focus being their relationship and all the trappings that come with it. No one wants to see that.

They weren’t the best couple to begin with

Their relationship has to be based on more than the fact that they were once engaged. The cheating on both their parts voids that whole point. They weren’t ready to be together. They were each looking for a way out and found it. The only reason they aren’t off happily dating other people (aside from George becoming a putz) is because there isn’t really anyone else to ‘ship them with in the town. A complete lack of other options isn’t a reason to go with a familiar face. It’s a reason to move out of Bluebell or take another hard look at any other potential mates.

Hopefully, this will be the one couple that finally gets their individual lives together in Hart of Dixie’s forthcoming fourth season. They don’t need to be together, but I’d still like to see them find some sort of happiness.