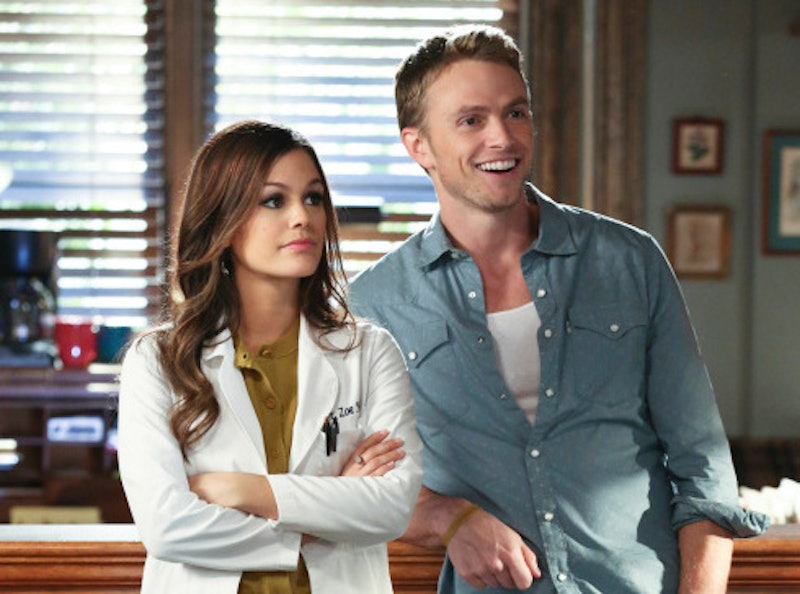 All signs point to an upcoming reconciliation between Wade and Zoe on The CW’s Hart of Dixie. The two were all fireworks the first time around, and having matured a bit, they may be ready to settle down for the real thing. If you’re wondering why this relationship looks so convincing, so authentic and so amazingly hot, it’s because this isn't Rachel Bilson's first time portraying tumultuous romance. Long before Hart of Dixie fans were cheering for Zade, she was making hearts break over her on-screen romance with Seth Cohen (Adam Brody) on The O.C.

How do the love lives of Zoe Hart and Summer Roberts stack up against each other? For any fan of both shows, there is no clear winner. But for fans attached to either, there is no comparison. Seth Cohen pinned for his love and finally won her over. He showed his affection in small, yet grandiose ways and was the voice for every guy who thought they never had a chance with that one popular girl in school. On the other hand, Wade cornered the market on “the bad guy with a heart of gold” in Bluebell and did it so well that fans found themselves getting a little sad when he wasn't onscreen. To figure out who lands on top, I picked five areas by which we can size up each relationship. Here we go:

Neither Summer nor Zoe seem like the type of women who require overly sensitive lovers. Still, being in touch with your emotions is never a bad quality to have; it makes communication easier and eliminates some of the unnecessary guessing.

Seth was clear from the get go with his love for Summer. He embarrassed himself almost daily trying to catch her eye. With a little help from Anna Stern and her wise words: “Confidence, Cohen,” he won Summer over and in the process, endeared himself to fans forever. Wade, on the other hand, didn't make a good first impression. Zoe immediately read him as a reckless playboy before finding out that he really does have a heart underneath all the bravado.

Brody is responsible for ushering in a new wave of geek chic. Hipsters are still modeling their look and affectations after Seth Cohen. And why not? He was sexy with a brush of naiveté. Yet somehow, none of that matters when Wade takes off his shirt. I can rattle off at least five times Wade’s appearance entirely wiped out a week of mediocrity — outside of the infamous baby goat scene. That chest. His arms. The way his eyes glisten and betray a hint of trouble. They could make a girl say dirty, dirty things like: Screw Chrismukkah.

Zade’s interactions are always sweet whether they are arguing or playing around. You can tell they fluster each other and you can feel the sexual tension in the room. He even knows which of Zoe’s buttons to push to get her to calm down or freak out. But Seth Cohen spent several episodes in The O.C.’s first season studying Summer. They couldn't stand seeing each other with anyone else, and were generally bumbling messes when they were apart. He got her into comic books and soon they were finishing each other’s sentences. The chemistry was so strong on screen that Bilson and Brody started dating in real life for a bit.

No one wants drama in their relationships and each onscreen couple had their fair share. But Wade cheated on Zoe. Fearing commitment, he slept with another woman. Most of Seth’s drama was stuff that was unfolding around him as opposed to actually involving him. Ryan was off being the shortest guy in Newport Beach, scaring off men twice his size with little else than the reputation of his hometown, Chino. Seth’s parents where the parents everyone wanted — Kristen’s little drinking problem aside. He was a little self-involved and did once go on a sailing trip solo dolo, but for the most part was a rock for Summer whenever she needed him.

And the winner is Seth Cohen (of course).

He may not have won this contest, but Wade has at least one more season of Hart of Dixie to even the score and wipe out the competition. Zade FTW.