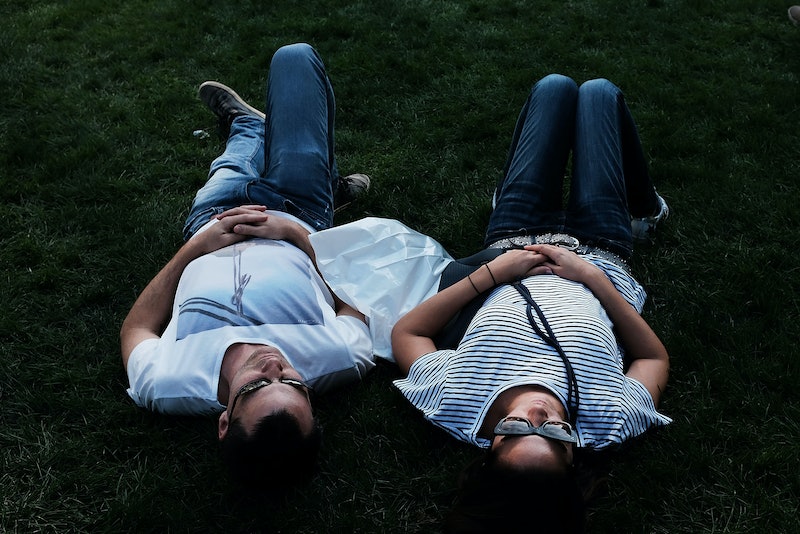 Have you ever wondered how dating in New York compares to, say, dating in Los Angeles? Or how it changes when you cross the pond to jolly old England? We sure have (gotta know what we're up against, you know?) — and happily, we’ve got some answers now, thanks to this handy-dandy infographic. Bustle partnered with our pals at online dating site WeLoveDates, which surveyed thousands of its members in NY, LA, and London to see how they match up in everything from typical first date activities to what qualities they look for in a potential partner. How surprising are the answers? Read on to find out!

No matter where you are, first dates pretty much always involve some sort of beverage. In both London and New York, sitting down for a few drinks or coffee is the getting-to-know-you activity of choice; if you want a meal, though, you’re better off in New York. Almost half of the New Yorkers surveyed said that if a drinks date goes well, dinner might follow afterwards, while 14 percent of London-based first dates include a meal. LA, though, is the place to be if you’re a fan of dinner on a first date.

Interestingly, it also looks like dating isn’t all fun and games for all three cities. When asked to describe dating in their places of residence in three words, New York, London, and LA all chose two negative words and only one positive one. Although New Yorkers find dating “exhilarating,” they also consider it “misleading” and “exhausting.” Angelenos and Londoners both agree that dating is “frustrating”; additionally, Londoners consider it “tricky,” while Angelenos dislike its “superficial” nature.

But hey, at least all three cities rank both personality and chemistry higher than regular ol’ physical attractiveness when it comes to the top qualities they look for in a potential date. In London, chemistry is the number one trait players of the field find hot; but in New York and LA, it’s personality. Maybe we’re not as shallow as we all tend to think we are?

Ultimately, it looks like dating in each city is a lot more similar than you might think. Take a look at the full results in the infographic below (click the images to embiggen them) — and if you want to change up the coffee/dinner/drinks routine for your next first date, check out these excellent ideas for New York via New York Magazine, London via BuzzFeed, and Los Angeles via LA Weekly.