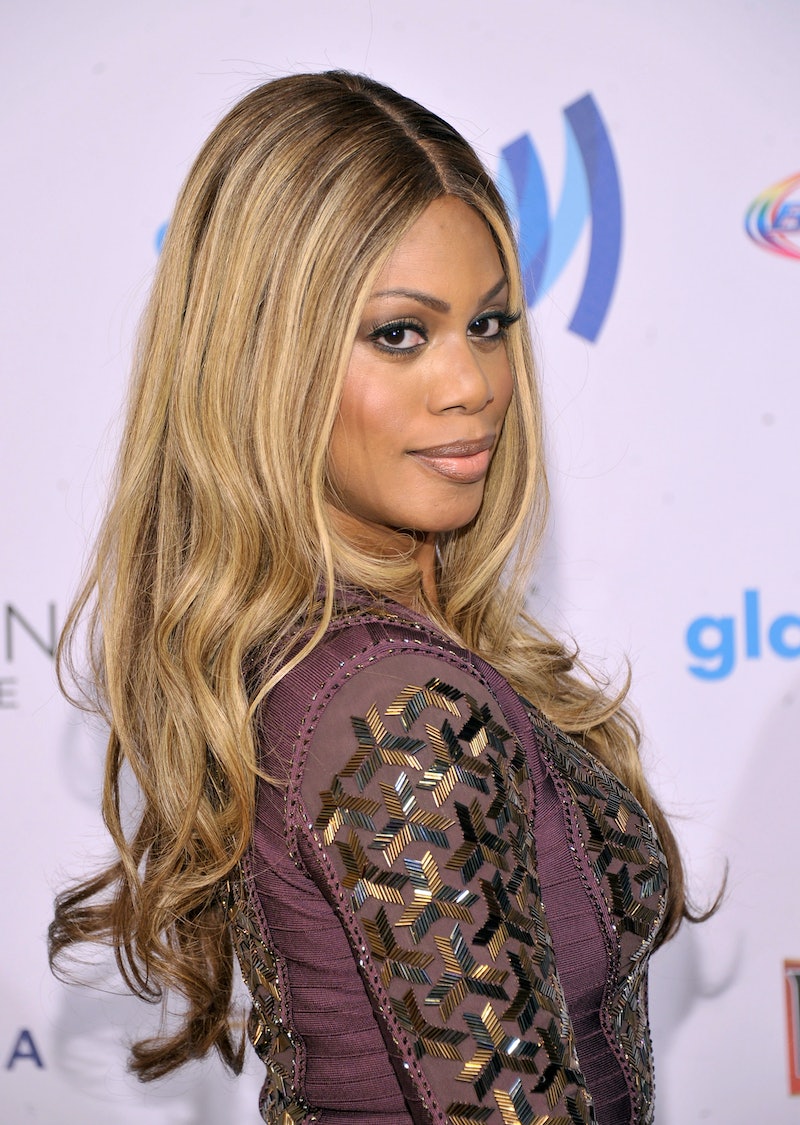 Since Jared Leto garnered critical acclaim for his role as a transgender woman in The Dallas Buyers Club, mainstream media has become at least marginally aware of the issues with casting cisgender men in transgender roles. Bustle had the chance to catch up with Orange is the New Black star and transgender activist Laverne Cox at The Opportunity Agenda's Creative Change Awards and according to her, this trend probably won't change any time soon.

"It’s about business and we are in, as bell hooks calls it, Imperialist White Supremacist Capitalist Patriarchy, so that market forces can’t be dismissed when casting decisions are made," says Cox.

Of course, the most recent instance of cisgender actors in trans roles came about when Arcade Fire released its video for "We Exist." The video stars The Amazing Spider-Man 2 actor Andrew Garfield in a role widely perceived as the depiction of a transgender woman and according to transgender writer Kat Haché, who wrote a piece on the music video for Bustle:

...there is a prevalent idea that viable transgender actors and actresses simply do not exist. Naturally, this becomes a self-fulfilling prophecy when they never gain exposure, rendered invisible by the lack of acknowledgment on the part of directors. One can see how this is especially problematic in a video for a song entitled “We Exist.” If so, where?

It's an issue a few speakers at the Creative Change Awards touched on as well. Comedian and activist Lizz Winstead spoke about how important it is that people who've been through an experience are actually the ones telling stories of their experiences and trans activist CeCe McDonald, whose imprisonment in a mens prison in Minnesota is the subject of a documentary being produced by Cox, added to that topic, suggesting that more trans actors should be playing trans roles. In fact, that's what made McDonald so excited to connect with Cox initially:

I heard through the grape vine that Laverne had this role [in Orange is the New Black] and that she was going to be this big TV star ... I was like really in awe that a trans woman is getting this opportunity to shine and to be put in a more positive light because usually roles of trans women are filled by cis men and also, roles that are portrayed by trans women are usually sex workers or drug addicts. So to know the story of Sophia and what she's been through and to have it sound so familiar ... to know that this beautiful strong woman who I look up to finally got her chance in life and now [Orange is the New Black is] on the second season so I know it's the shiznit. (Laughs)

Unfortunately, for the business of making television and film, it's not that simple. According to Cox, much of the reason cisgender men continue to be offered roles as transgender women is a result of calculated business and marketing decisions. "'Andrew Garfield the Spider-Man guy' in an Arcade Fire video is going to make headlines and people are going to click on it and talk about it and you’re asking me about it, so that’s a business decision," she says. "If I were asked to do the Arcade Fire video, I don’t know if it would have the same kind of attention."

Of course, Cox did note that casting a trans woman in the role would certainly have benefitted the women in the transgender community. "Trans actresses certainly need jobs," she said. According to the actress and activist, trans women's unemployment rate is double the national average and for trans women of color, that number is quadruple the national average. The situation isn't much better for trans men. With that in mind, the goal of casting trans people in trans roles isn't just an issue of representation and an opportunity to allow trans people to tell trans stories, it's also a matter of combatting disheartening unemployment rates in the trans community as well.

That being said, Cox says she can't hold any of this against actors like Leto, Garfield, or even Eddie Redmayne (who was recently cast as transgender woman Lile Elbe in The Danish Girl). "As an actor I never I would never suggest that another actor shouldn’t play a role," she says. "I want to play a wide variety of different characters and I think that cisgender actors, I’m assuming, want to do that as well — that’s the nature of being an actor."