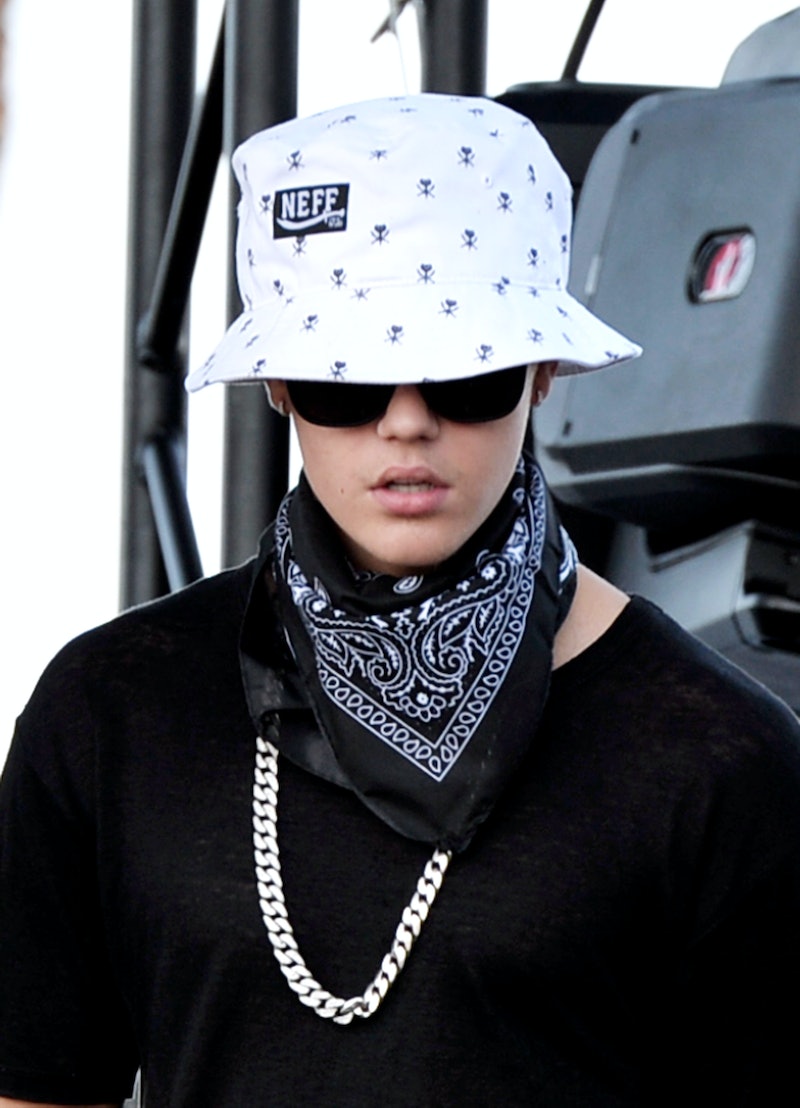 On Sunday morning, Justin Bieber posted a teaser clip of his newest song, "It's Working," on his Instagram page. Obviously, like a late-night text reading, "Sup? Need 2 talk," this late-night Instagram post is his way of letting us know that all is not right in Bieber world. Due to the cryptic nature of the message, however, we have no idea what the problem actually is. On the track, Bieber sings, "You know exactly what to do to hurt me/ It's working, it's working." But what is it, Justin? Use your words! Let us in to your tortured cage of a soul!

Clearly, Bieber has had a lot on his plate this year. He has been booed at a Clippers game, accused of attempted robbery, and trapped, shirtless, in a room with Paris Hilton. That's enough to hurt anyone, several times over. Then again, what if Bieber is taking a walk on the side of normalcy? What if, instead of obsessing over Selena Gomez's latest bikini picture on Instagram (his code name is "Pickles"), Bieber is simply feeling pain from the more mundane aspects of life? Instead of feeling emotional pain and lashing out, he could be speaking directly to any number of smaller aggressors. Let's see who or what they really are.

No, I'm not talking about the song by Vanessa Hudgens. Bieber works with paper often, and what if paper has been getting into places where it shouldn't be? What if paper has been cutting? What if, when he was making an alcohol-free gin and tonic, the international pop star accidentally squeezed some lemon juice onto his fresh wound? Boom. Instant song material.

Young Master Bieber is no stranger to the needle. Perhaps, with this song, he is paying tribute to the pleasurable pain of acquiring a new tattoo, one that will last him throughout the years without causing any future embarrassment. Nothing says "timeless" like the bust of an unknown Native American chieftain. Just ask Urban Outfitters.

Fun fact: while some suspect that Bieber has been wearing his sunglasses and inverted bowl hats for fashion, he has actually been making a public statement about the dangers of exposing one's skin and eyes to ultraviolet (UV) rays. The United States Environmental Protection Agency reports that too much exposure to UV rays can cause "skin cancer, cataracts, suppression of the immune system" and "premature aging of the skin." Bieber has the soft skin of a two-day-old naked mole rat, and he's working to keep it that way.

While some may claim that gluten allergies do not exist, Bieber knows the truth. He has been hampered over the past few years by his secret allergy to all things glutinous. From French bread to cupcakes to non-alcoholic beer, Bieber has been missing out on some of his favorite edible pastimes. It's eating away at him, just as he cannot… eat away… at it…

He got his finger caught in one of his chains and a little bit of skin came off. The doctor said it should take about three to five days to heal fully, and Bieber is trying to keep it quiet so that his fans don't totally freak out. You heard it here.

Fabrics That Are Not Silk

Living in the lap of luxury is hard, because not every hotel can provide the luxury to which you are accustomed. Word has it that Bieber, in addition to gluten intolerance, has come down with a severe case of cotton intolerance. Unless said cotton is sustainably grown and harvested by hippies in the United States, it cannot touch his skin.

It's hard out there for a pop star. The flash of bulbs, the press of crowds, the need to be effortlessly coiffed at the drop of a stylist's hat: Bieber has lived through it all. In the end, this short clip could be the precursor to his announcement of a holiday, a very long holiday. And he doesn't expect he shall return. In fact, he means not to.

From the paper products that cover our desks to the dancing rays of sun that dapple our sidewalks, the world is full of mundane objects that are working to hurt us in small but meaningful ways. Thanks to Justin Bieber, we have the time and mental space to recognize them, to reflect on them, and to incorporate them into our art. If that isn't existential success, I don't know what is.