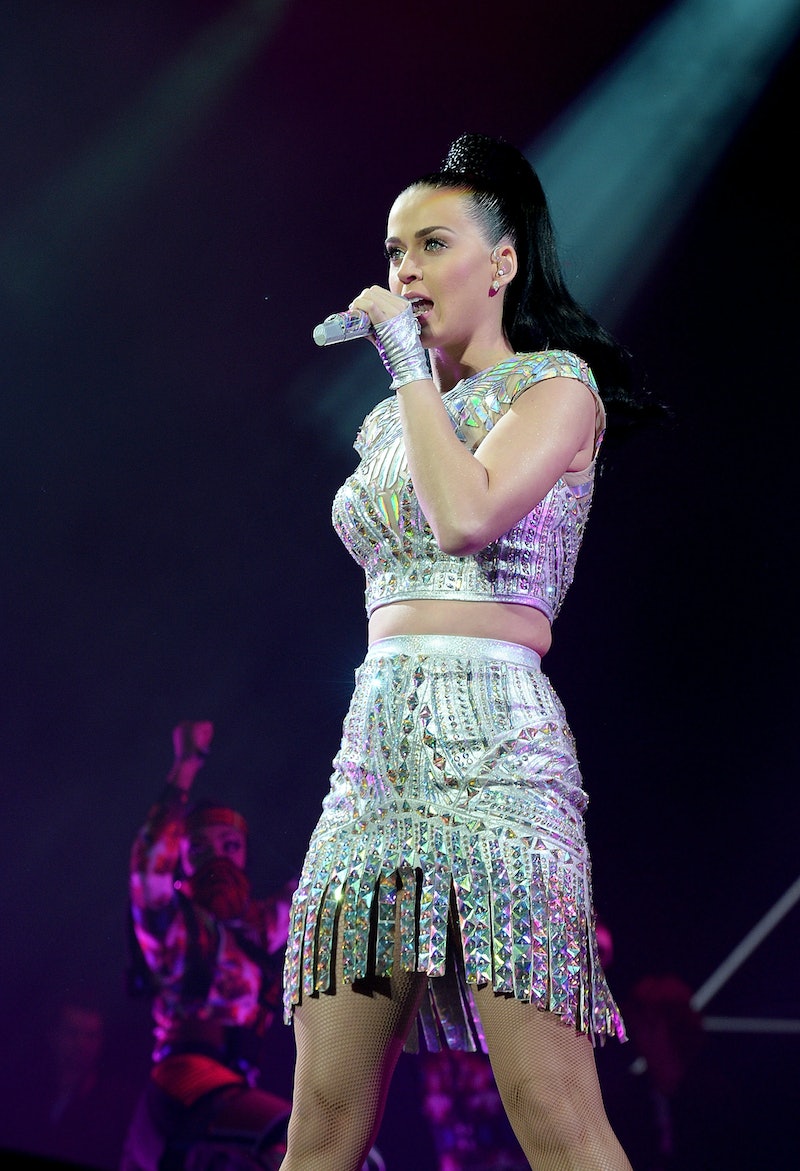 Cosmopolitan magazine just bestowed a great honor upon Katy Perry, but I'm not so sure she deserves it. With the release of its July issue, the pop singer will become the first woman to ever grace the covers of all 62 editions of Cosmopolitan worldwide. Editor in Chief Joanna Coles is even calling her "the first Cosmo global icon." But should Perry, who is known for her cultural appropriation and at times naive outlook on feminism, really be the global representative for the world's number one woman's magazine? Maybe not.

Sure, Cosmo could have done a lot worse, but Perry certainly isn't among the best they could have picked. She may be hugely popular and her music may "have universal appeal to young women everywhere," as Coles says, but lately Perry has demonstrated anything but an understanding of global culture. Yes, Coles is right, Perry "crosses all cultural boundaries," but not in the way she should.

In November we got a first look at Perry's naiveté when she donned a kimono and danced around on a Japanese-inspired set at the American Music Awards. It was cultural appropriation at its finest and unfortunately, it didn't stop there. Things then went from bad to worse.

When the understandable backlash flowed in, Perry attempted an apology that just reiterated her lack of understanding about Japanese culture. “I was thinking about unconditional love, and I was thinking: Geishas are basically, like, the masters of loving unconditionally.” Okay, except for a Geisha's "love" was actually often offered on the very conditional basis of money. But are we surprised that the pop singer who once reduced Japan to “the capital of adorableness” didn't read up on her cultural history before hitting the stage in a kimono?

But for Perry this was just the start of her cultural guilelessness. In February, Perry debuted a clip of her new "Dark Horse" video that showed she'd moved from Japanese appropriation to Egyptian; she is shown dressed as "Katy Patra" and her video is, for no reason at all, scattered with scores of Egyptian stereotypes. It's hard to know whether Perry is ignorant of her actions, or that she just doesn't care, although neither of them are good for her reputation as a global icon.

If you think that was the end of it, you'd be wrong because in April, Perry was back with a clip to promote her "Birthday" music video and this time, she channeled a Jewish stereotype. Yosef Shulem is Perry's version of Jewish comedian, but in case the audience wouldn't know he was Jewish she went overboard with the stereotypes, putting on an over-the-top New York accent and telling jokes about money. (Because Jewish people are obsessed with money, isn't that funny?)

So in less than a year Perry has managed to appropriate three cultures and show her lack of understanding of why this was wrong. I have a really hard time accepting someone like that as a global icon. But I also have a hard time accepting her as a Cosmo icon either, especially since the magazine has lately championed itself as a feminist publication.

Not that long ago, Perry admitted she didn't even know what feminism meant, yet went on to give a definition that is problematic and heteronormative. "Now that I do, it means that I love myself as a woman and that I also love men," Perry said. "So, sure! I am a strong woman! So hear me roar!" There are a lot of flaws with Perry's view of feminism, like that she's plugging her so-called feminist anthem song "Roar" when like Maitri Mehta says, "it’s a world she doesn’t really understand."

It's unfortunate that an internationally recognized woman's magazine picked Perry as their global icon when both her views on feminism and other cultures is naive at best. But fingers crossed through this experience, Perry will (finally) learn from her past mistakes. I don't think I can take a fourth example of cultural appropriation.

More like this
Beyoncé & Madonna’s “Break My Soul” Remix Honors A Group Of Black Icons
By Stephanie Topacio Long
Everything To Know About Beyoncé's 'Renaissance Act II'
By Marina Watts
Christina Perri Reacts To Her 'Twilight' Song Being One Of YouTube's Most-Viewed Ever
By Radhika Menon
Beyoncé Is The First Woman To Have A No. 1 Album Since Adele Did Almost A Year Ago
By Radhika Menon
Get Even More From Bustle — Sign Up For The Newsletter