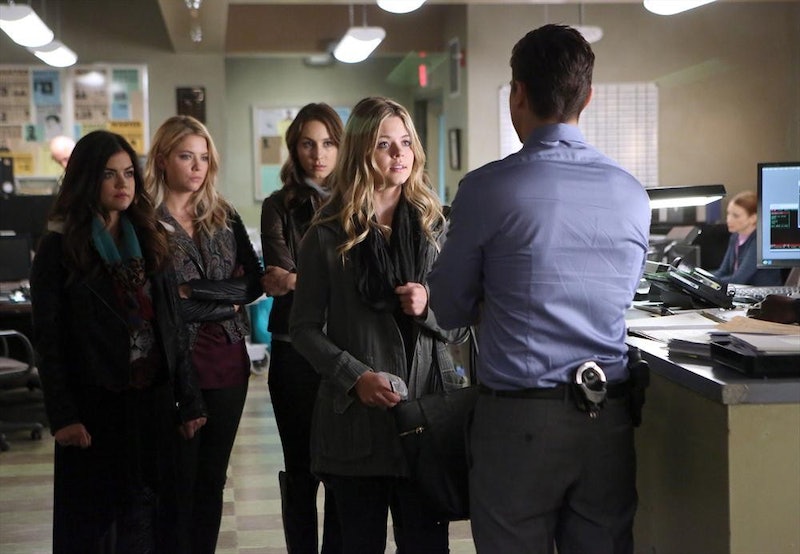 Get ready to step up your A game — Pretty Little Liars is returning for Season 5 on June 10. Spencer, Hanna, Aria, and Emily are back, but this season they will be joined by their (very much alive) original leader, Alison. While last season was full of answers (Alison is alive! Mona helped Ali fake her death! Ezra is a kind of a jerk!) it wouldn't be Pretty Little Liars if it didn't leave us with buckets of questions to be answered in the following season. According to showrunner I. Marlene King's interview with IBTimes, Season 5 of Pretty Little Liars is "like a freight train that is just heading down a course, and it doesn’t stop." Now the big question is, will this freight train finally deliver the answers we've been looking for since Season 1?

We've collected plenty of Pretty Little Liars spoilers for the new season, and while they aren't exactly spilling A's identity, we did find out some juicy news about where our little liars are heading come Season 5. These high school seniors have certainly been put through the ringer these past few years, and last season's finale didn't exactly make their lives any easier. Between Ezra getting shot and Ali's reveal that it was her own mother who buried her alive, the girls have a lot to think about for the new season. So what do we already know about their journey? Here are the spoilers you'll want to know before the premiere.

Good news, Ezra fans — the English teacher will live to see Season 5. According to E!, Ezra will survive the gunshot and use his second chance at life to try to win back Aria's trust. Ugh, does that mean they'll get back together? We hope not.

We'll Find Out Who His Shooter Was

...And way sooner than you might think. Pretty Little Liars has a tendency to dangle answers in front of our faces and then snatch them away (like A's identity) but here's one answer we won't have to wait for. According to King's interview with The Hollywood Reporter, we'll find out who shot Ezra very early in the new season. Whether that person really is A is another question entirely.

There Will Be A Christmas Episode

Sometimes it seems that Pretty Little Liars forgets about the holiday season all together. Not in Season 5, though — King has confirmed that we'll see a very special Christmas episode this year. It will replace the traditional Halloween episode.

E!'s Spoiler Chat revealed that we would see a hot horseback riding instructor and a surly nurse in the new season. Who else is joining the cast in Season 5? Carrie Diaries fans will be happy to see Chloe Bridges (AKA Donna LaDonna) return to the small screen as Sydney, a new member of the Rosewood swim team according to The Hollywood Reporter.

...And the return of some old faces

Now that Ravenswood is over (RIP, you weird, weird show) ABC Family officially announced in March that Tyler Blackburn's Caleb is returning to his Pretty Little Liars roots. Will he run back into Hanna's arms? Not so fast — Blackburn spoke to TVFanatic and hinted that his Caleb's reunion with the not-so-single Hanna (remember Travis?! I certainly do) won't be the thing that Haleb shippers are hoping for. According to this very cryptic tweet, things could heat up between Caleb and — yes, seriously — Alison. PLL writer Bryan Holdman tweeted this and freaked out every PLL fan in the entire world.

Thanks to a sneaky Instagram on actress Tammin Sursock's account, we know that Jenna will also return to Rosewood — how will she react to the news that Ali isn't really dead? The last time we saw Jenna she had been nearly drowned by a mysterious person at Emily's surprise party — let's hope she stays safe in Season 5.

Lucas is coming back to Pretty Little Liars as well — and expect some major changes in his character. According to interviews King did with both TVLine and The Hollywood Reporter, Lucas is not the same guy he was when we last saw him and Lucas will play a pivotal role in the premiere.

If the writers bring back Lucas, can he at least stick around this time? Thanks.

Alison Isn't The Same Person She Was When She Left

Is the mean girl that Ali was no more? According to King's Hollywood Reporter interview, this season will focus on how Ali has changed since her "death."

We'll Find Out What Melissa Whispered To Her Dad

Thank God for Twitter-happy PLL writers. One of the finale's biggest mysteries was what Melissa Hastings whispered to Mr. Hastings at the police station after Melissa tells her father that Spencer did not kill the girl in Ali's grave. While we all wish that Melissa would have spoken just a teensy bit louder, writer Joseph Dougherty did say that we would find out this season about that pretty little secret:

So. Much. Waiting. Sigh. Now that you have all the spoilers for Season 5, tune in to Pretty Little Liars on June 10 at 8 PM on ABC Family.