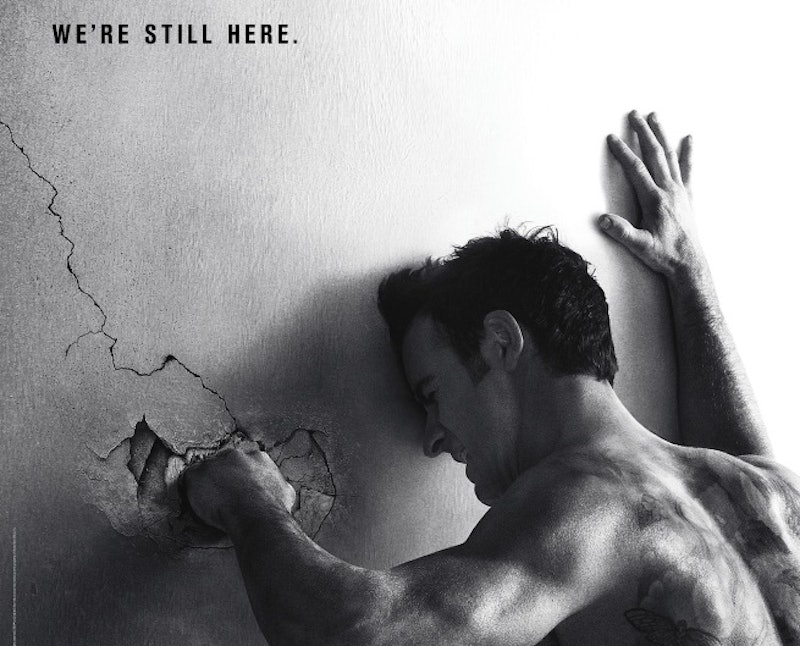 HBO's newest show, set to premiere on June 29, is the highly anticipated drama The Leftovers. The series takes place in a world where a rapture-like event has occurred, referred to as the Sudden Departure, during which approximately two percent of the world's population inexplicably vanished three years earlier. That may not seem like a terribly large number, but the phenomenon of 140 million people simultaneously disappearing into thin air would understandably rattle even the sharpest of minds and shake even the strongest of faiths. It's an interesting concept that must've originated somewhere, so eager viewers are wondering, what is The Leftovers based on?

No, The Leftovers is not based on the right-wing, Rapture-focused, Left Behind book and film franchise by Tim LaHaye and Jerry B. Jenkins. (In fact, The Leftovers is very specific in stating that what occurred is not the Biblical Rapture.) The Leftovers is actually inspired by the 2011 novel of the same name by Tom Perrotta. The author may not be a household name like J.K. Rowling or Stephen King, but chances are you've already been exposed to his work in one form or another. Here are some of Perrotta's works that you might know him from.

Perrotta's 1998 novel Election was adapted into a 1999 film of the same name starring a young Reese Witherspoon hot off her Pleasantville and Cruel Intentions success. It also starred Matthew Broderick as a down-on-his-luck high school history teacher who finds himself scheming to take ambitious student Tracy Flick down a notch when she runs a cutthroat campaign for class president. The film version was helmed by a then up-and-coming filmmaker named Alexander Payne, now the lauded director of such Oscar darlings as Sideways, The Descendants, and Nebraska. Election earned Payne his first-ever Academy Award nomination for adapting Perrotta's novel to the screen and is a shining example of Perrotta's trademark black humor, memorable characters, and biting allegory.

Another of Perrotta's novels was turned into a film in 2006. Little Children starred Kate Winslet, Patrick Wilson, and Jennifer Connelly in a scathing suburban parable centering around an ill-advised affair that sends several lives spiraling out of control. The film received three Oscar nominations: Best Actress for Kate Winslet, Best Supporting Actor for Jackie Earle Haley (in an unsettling role as a man returning to the neighborhood after serving time for exposing himself to a minor), and Best Adapted Screenplay for Perrotta himself, who co-wrote the script based on his own novel with director Todd Field. Little Children continued Perrotta's trend of whip-smart social observations, leading New York Times critic Will Blythe to write in his review of the book that the author is "an American Chekhov whose characters even at their most ridiculous seem blessed and ennobled by a luminous human aura."

Apart from Election, Little Children, and The Leftovers, Perrotta has published three other novels: The Wishbones (1997), Joe College (2000), and The Abstinence Teacher (2007). The latter work was optioned to Warner Independent Pictures a year before its publication. Though still stuck in development, the adaptation has been attached to several impressive names — most recently director Lisa Cholodenko of The Kids Are All Right.

HBO's adaptation of Perrotta's latest novel is being overseen by Damon Lindelof, who's most famous as the showrunner of the similarly mysterious Lost. (He's also written films including Star Trek Into Darkness and Prometheus.) There are a couple of different tactics writers can make when adapting books to television. Sometimes the translation is relatively faithful (like Game Of Thrones). Most often, however, TV writers use books as a jumping-off point to launch their own original stories (such as with The Walking Dead, True Blood, and Dexter).

Early reports seem to suggest that The Leftovers is adopting the latter approach — which make sense. The novel is mostly concerned with the emotional lives of its characters, examining how they all cope with grief in a myriad of fashions. While George R.R. Martin supplied HBO with thousands of pages of material for their Game Of Thrones series, Perrotta's novel ends after only 355. Lindelof has to create new material if he wants to sustain momentum for several seasons. And coming from the guy behind Lost, you can probably expect a bit more mystery around the Sudden Departure itself.

There are already signs that Lindelof's adaptation will differ from its source material in significant ways. Most noticeably, the occupation of protagonist Kevin Garvey (played by Justin Theroux) has been changed from Mayor to Chief of Police — Lindelof said he wanted to put Kevin in a position where he'd "be on the front lines of stress and aggravation." The trailers have also featured quite a bit more action and less internal rumination than fans of the novel might expect.

No matter how many changes Lindelof makes in the course of adapting Perrotta's work, we hope that he remains true to the novel's themes, and that The Leftovers captures Perrotta's keen observations of society's underbelly as successfully as the author's two previous onscreen incarnations.

More like this
The Biggest Differences Between 'Bullet Train' & The Book It’s Based On
By Arya Roshanian
‘The Simpsons’ Will *Finally* Address How They “Predict The Future”
By Sam Ramsden
The Bestselling Novel 'The Doll Factory' Will Be Adapted Into Thrilling TV Series
By Catharina Cheung
The 'PLL: Original Sin' Creators Say A’s Identity Will Be “Very Clear” By The Season Finale
By Alyssa Lapid
Get Even More From Bustle — Sign Up For The Newsletter