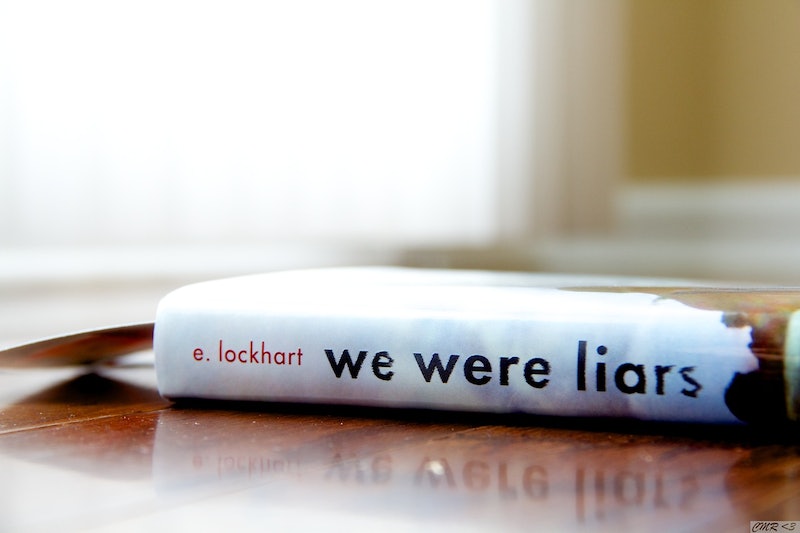 Deadline reported exclusively this morning that E. Lockhart's summer hit We Were Liars has been optioned for a movie adaptation.

We Were Liars, the story of three cousins and their childhood friend, is one of the most buzzed about books of 2014, and with good reason. The four "Liars" spend their summers together off the coast of Massachusetts on a private island populated by four mansions, one for the patriarch and one for each of the three mothers. It's about love, loss, youth, and family, and it's got a twist that has everyone talking.

Though there are always worries when a novel so many people love is adapted in any way, this news is incredibly exciting. Of course an option doesn't mean the book will definitely make it to the big screen, but in case it does, there are seven reasons this news is very, very exciting.

E. Lockhart's writing in the We Were Liars novel is lyrical, haunting, and stunning. Here's hoping the money people around her give her creative freedom to pen the script how she wants it.

2. It was optioned by Imperative Entertainment

Imperative Entertainment is the collaboration of Heroes creator Tim Kring, Blacklight founder Zak Kadison, and Farrelly brothers producer Bradley Thomas. Essentially, they are some respected names. The company aims to create "multi-platform" movies, and as a smaller company, this could mean they they'll make more interesting, less blockbuster, films, which is perfect for the novel.

Some people may take it as a bad sign that We Were Liars is Imperative's first significant material sale, but it probably means they'll put a lot of energy and effort into making sure it works.

3. It means (hopefully) more YA in the movies

This news, in addition to adaptations of Gayle Forman's If I Stay and the movie options of Ann Brashares' The Here and Now and Rainbow Rowell's Eleanor and Park could mean that outsiders may finally put to rest that all YA is is dystopia and people with magical powers. And when people can stop seeing YA as just one type of genre, we can all stop pigeonholing and really see what amazing voices and stories YA has to offer. Also, it's pretty cool that these are all women, for those John-Green-Owns-YA voices that keep popping up.

Picking a cast for the four Liars means digging through the vast amount of talented younger actors populating the screens today. Instead of huge names, you can look to smaller names that truly match the characters. However, I still contend Phillip Seymour Hoffman would have absolutely owned the role of Cadence's grandfather Harris Sinclair. And somebody please make sure they call Natalie Dormer to be one of the mothers.

Of course Shailene Woodley could play Cadence. She could play anyone. She's a dazzling, super talented actress. But let's imagine that her schedule is far too busy.

Okay, I might be biased because I absolutely love AnnaSophia Robb. She starred in a movie close to my heart, Bridge to Terabithia, and her work in The Way Way Back was stellar and shows she has the chops. Cadence requires some range, and I think Robb has it. Plus, she has the white-blonde Sinclair family look. (And she'd rock the post-accident dark hair.)

He was contemplation and enthusiasm. Ambition and strong coffee

Kunal Sharma is probably best known for his work in The Kids Are Alright, and as Gat, he could pull off the angry side, but he still has the energy and charisma to draw Cady in. And sure, he's in his mid-20s, but look at that face; he can pull off 17.

Johnny, he is bounce, effort, and snark

This Brit actor is about to break out, so let's snag him quickly. Booth has major movies coming out soon, including Noah and Jupiter Ascending. He's got crazy talent, and I'm sure he could pull off Johnny's pranks and jokes with ease. The fashion teams will just have to lighten his already blond hair.

Mirren, she is sugar, curiosity, and rain

Wilde won't have to try too hard to put on Mirren's old-money roots; she's part of the aristocratic Gough-Calthorpe family and the granddaughter of the great-great-great-grandson of Margaret Tudor, sister of Henry VIII.

4. It's a gorgeous summer story

Can't you already picture the sun-splashed beaches painted all over the big screen with what seems like a dated Intstagram filter? Giant mansions on private islands and boat rides are what the big screen is made for, in my opinion, not bombs and explosions. It would just flat-out look gorgeous on the screen.

5. The themes are genre kryptonite

Who isn't enthralled by the best friends-over-the-years reunion stories? Ed Burns practically made his entire living making them. It worked with Now and Then, it worked with The Big Chill, and I know it will work with We Were Liars. It has the nostalgia baked right in.

That's really all I can say. We Were Liars is shrouded in secret, and that's exactly how it should be.

More like this
Why The '365 Days' Sex Scenes Are Good, Even If The Movies Aren’t
By Arya Roshanian
What Is Barack Obama’s Net Worth? He Makes *Way* More Now As An Ex-President
By Hugh McIntyre
10 Must-Read New Books Out This Week
By K.W. Colyard
Akwaeke Emezi’s Romance Is *The* Book Of Hot Girl Summer
By Shahed Ezaydi
Get Even More From Bustle — Sign Up For The Newsletter