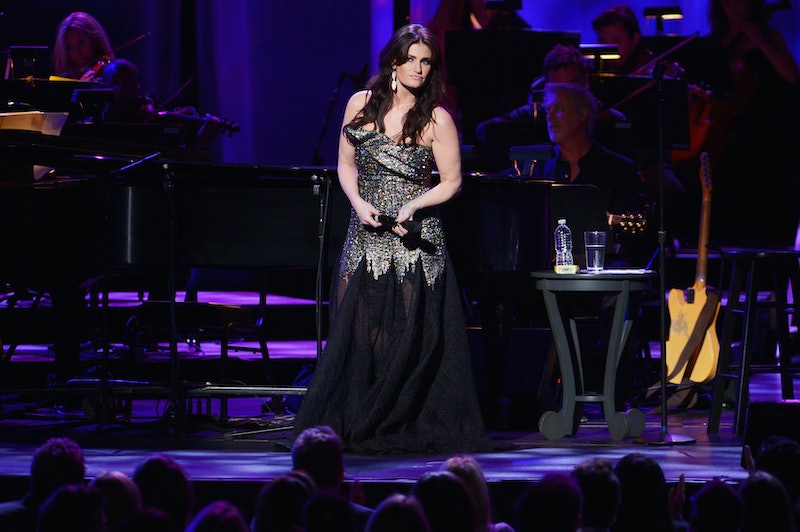 They're real...and they're spectacular. That was Idina Menzel's attitude after she endured a slight wardrobe malfunction during her sold-out show at New York City's Radio City Music Hall on Monday. Video has surfaced of the moment when the Broadway superstar was alerted to the fact that her boobs were coming out of her leather top and quickly made an adjustment. "My boobs are coming out!" Menzel said on stage. While Menzel may have seemed a little surprised by the moment, she certainly wasn't embarrassed by her assets, telling the audience, "Fuck it, they're real!"

Now, just in case the singer/actress didn't handle the moment wonderfully enough as is, she made a Rent reference regarding her boobs' cameos ("These divas need their stage!") in the middle of singing her character Maureen's part in "Take Me or Leave Me." If anything, the 43-year-old was just channeling the Rent bombshell. As Menzel put it, "Well, she was a sexy character!"

The Tony-winning star (who is currently appearing down the street from Radio City Music Hall at the Richard Rodgers Theater in the musical If/Then) really took the whole thing in stride, even joking with the supportive crowd that the moment was "gonna be all over television." Of course, the real testament to Menzel — other than her good sense of humor about herself during clothing slip-ups (and name mishaps) — is that that wasn't the highlight of the evening. While we're sure the members of the audience got a kick out of the moment, we're guessing they walked away talking about her performing the likes of her show-stoppers like "Let It Go" from Frozen and "Defying Gravity" from Wicked.