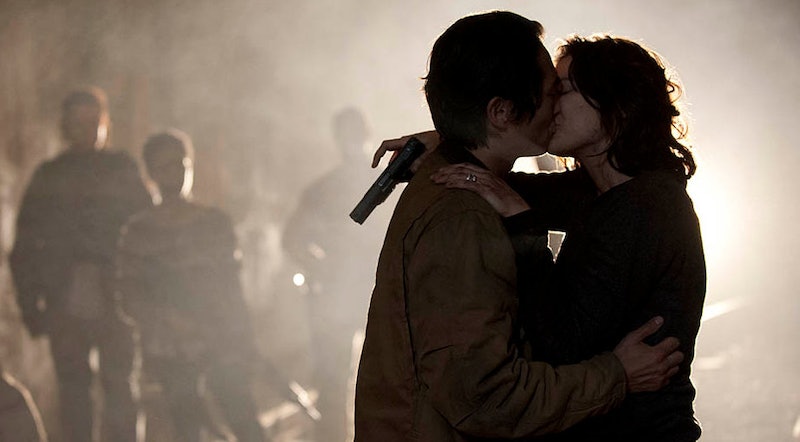 You know a TV show is addicting and nerve-wracking when you're already worried about its next season months in advance. That's definitely the case for Season 5 of The Walking Dead, which premieres in October, but already has us worrying about those pesky maybe-cannibals. Will some of our favorite characters get grilled up for a Terminus cookout next year? While we shudder to think about Daryl being served on a plate next to some corn on the cob, this is a show about a post-apocalyptic zombie invasion, so we'd be kidding ourselves to imagine that everyone will emerge from the events of last season's finale unscathed.

While there hasn't been any confirmation of the cannibal theory, everything at Terminus is certainly not as it seems. (No one with a side braid should ever be trusted. *cough*Mary*cough*) But while fans fret about whether or not TWD is about to tackle "The Hunters" storyline from the comics, there's another plot from the source material that's got us worried. Sure, it may not involve humans eating other humans, but it's not all sunshine and rainbows, either. There are plenty of warning signs that there's "Something To Fear" ahead, and if we're right, then TWD fans are going to be reeeeeally sad this fall. Unlike the happy campers we usually are, of course.

What is "Something To Fear"? Glad you asked.

Volume 17 of Robert Kirkman's Walking Dead comic series, entitled "Something To Fear," introduced readers to the Saviors. They're one of the largest organized groups in the post-apocalyptic world, led by a man named Negan. Over time they've grown more and more violent, becoming glorified thugs that demand rations from other colonies in exchange for protection from zombies. If the colonies don't comply with their demands, then the Saviors murder, rape, and pillage until there's nothing left.

Rick and his group encounter four Saviors on the road. When the thugs demand they give up their supplies "for Negan," Rick kills three of them and sends the remaining Savior with a message to their leader to stop harassing them. In retaliation, Negan leads his band of murderers against Rick's colony, resulting in the deaths of several important characters.

Negan is one of the primary antagonists in The Walking Dead comic series, rivaling The Governor in terms of infamy and brutality. While the characters on the show already have plenty to fight against in the hordes of undead alone, TWD really benefits from a centralized villain to help focus the story and tie all the disparate plots together. Just look at how well-received David Morrissey's depiction of The Governor was. Rick's conflict with the sadistic leader pulled the series out of its Hershel's-farm-slump and provided plenty of juicy drama for the occasionally ponderous show.

So why do we think the show might be about to adapt "Something To Fear"?

Another One Bites the Dust

First of all, the "Something To Fear" volume kicks off just as Rick & Co. have settled into a seemingly secure "Safe-Zone." The entire second half of last season focused on the group following signs to a seemingly secure location called Terminus. When they finally arrived, they found an outwardly peaceful society... but that illusion didn't last very long before revealing the ugliness beneath. Is our group about to fight their way free of a band of cannibals only to wind up in the hands of less-than-desirable Saviors? That's unclear at this point. But one event in the "Something To Fear" story line has us very worried: the death of Glenn.

In the comic, as retribution against Rick, Negan picks one of his group at random for execution. Glenn is the unlucky victim, and he gets up close and personal with Negan's weapon of choice — a baseball bat wrapped in barbed wire. We've already been dreading spoilers that seem to point towards Glenn's imminent demise, and if the show really is going there, then that's as good a sign as any that they're planning on adapting this blood-soaked volume.

In "Something To Fear," Glenn's death comes shortly after he learns that Maggie is pregnant. So if you hear anybody mention the word "baby" when Season 5 starts this fall, get ready to say hello to Negan and goodbye to Glenn.