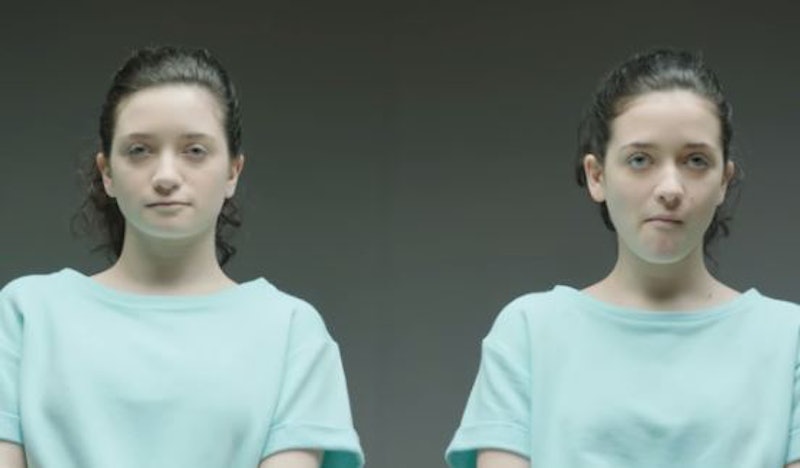 Do gum chewers get a bad rap? Maybe. That’s what Beldent gum — known in the U.S. as Trident — asked in a recent ad. Called “Almost Identical,” the campaign set up a combination art installation/social experiment at Buenos Aires’ Museum of Contemporary Art to see how gum chewing affects our perception of other people. The ad isn’t new — it first hit YouTube in November of 2013 — but it won eight Lions at Cannes last week, so it’s worth taking another look at.

Here’s how the experiment went down:

Sets of identical twins were dressed the same and seated side by side, with the one obvious difference between the two of them being that one was chewing gum (Beldent, of course), while the other was not. People visiting the installation were then invited to put on headsets in front of each pair and answer questions about them—the sorts of “Which one is more likely to…” questions on which perception experiments tend to rely. Of the 481 participants who took it upon themselves to rate the twins, a whopping 73 percent favored the twins chewing gum. Why? The gum apparently made them seem more positive. As David Gianatasio at AdWeek notes, “The gum chewers, with their mouths in motion, seem to be smiling at times. They look more relaxed and happy than their tight-lipped twins, who make pouty expressions, as if thinking: ‘Damn, I wish I had a piece of gum!”

But something about the whole thing seems kind of… off. First off, I wasn’t aware that there was still a stigma against chewing gum. I mean, I’m not generally a gum chewer — I prefer mints, mostly because you don’t have to worry about disposing of them when they lose their flavor—but I don’t look badly on people who do chew gum. I thought we left that whole thing behind in the ‘50s. Second, I think saying the conclusion the video arrives at — “The one chewing gum gives a better impression” — is reaching juuuuuuuust a bit. Note, for example, the fact that all the questions seemed to be skewed towards giving the gum-chewing twin positive traits (“Which one has the better sex life?”) and the non-gum-chewing twin negative ones (“Which one is most likely to fire you for asking for a raise?”). What about questions like, “Which one is most likely to cancel plans with you at the last minute?” Or, “Which one is most likely to run a work project in on time?” I’m speculating here, but I’d bet that the gum chewer would be seen as the flake and the non-gum-chewer would be seen as the reliable one. I’d love to see what the outcome of an experiment like this would be like if it consisted of a more balanced set of questions.

But of course, it’s an advertisement, so naturally it’s going to be biased; its goal is to shill chewing gum, after all. I’ve stated many, many times that I don’t generally mind manipulative advertisements, since ads are meant to, y’know, sell things, but this? Not my favorite. Viral ads are one thing, but if you’re going to tout your ad as “scientific,” you can’t design an experiment such that it automatically gives you the outcome you want. That’s just bad science. I wonder what Ben Goldacre would have to say about it?

In any event, though, if gum is your jam, I won’t stop you from chewing it. Go ahead. Blow bubbles, even. Bubbles are awesome.