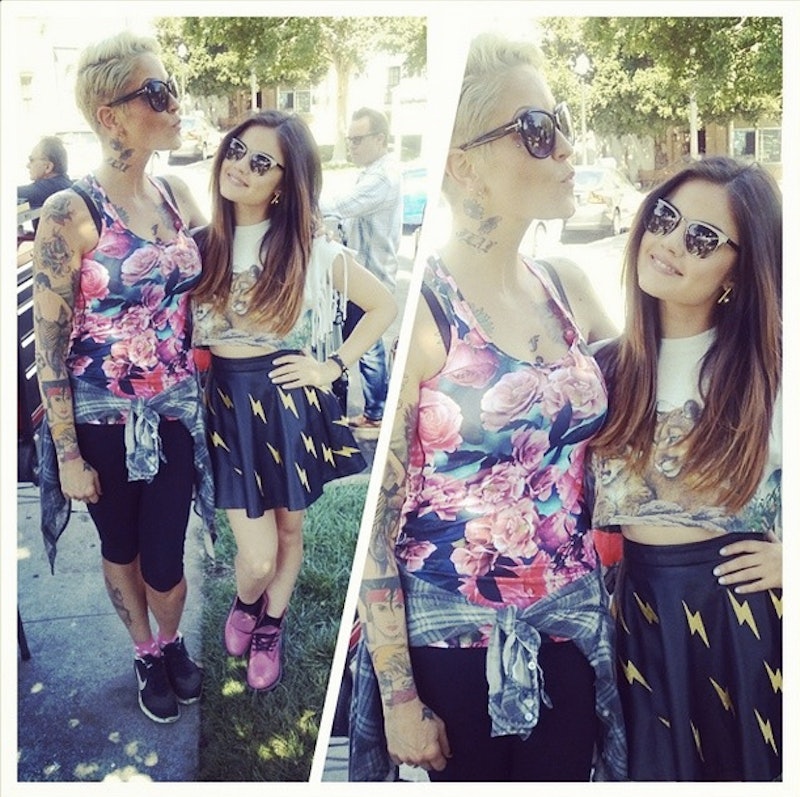 She may not have won the Pretty Little Liars style MVP so far this season (Spencer, Emily, and Hanna have respectively taken that honor in the three episodes that have aired at this point), but there's no denying Aria Montgomery's status as the unofficial outfit queen of TV's most stylish show. Heck, even the show's costume designer Mandi Line refers to Aria as her "mini-me!"

Personally, I'm more of a staid Velma Dinkley/Spencer Hastings-esque type, but back when I was in high school? I definitely rocked a more edgy, Aria-approved style. My favorite socks were thigh highs with roses going up the sides, my favorite shoes were Chinese brocade Chuck Taylors, and my favorite skirt was covered in punky gold stars — and I probably wore all three things at the same time at one point. In short, I'm a huge Aria Montgomery fan, and would give my left hand for an ounce of her panache.

So what do you need to recreate the littlest Liar's style? Well, striking silhouettes are a start: Ms. Montgomery tends towards either dramatic full skirts or fun body con numbers. You'll also want some wild fabrics — crazy colors and animal prints (or both) are a good start. What else? Statement shoes (emphasis on "statement"), and some major accessories. Here's a little shopping list to get you started:

You know Aria would get a kick out of these black and white roses against a mint green background. Plus, this Topshop frock features an elegantly adorable bow detail on the back!

You can't do Aria without a good leather (faux or otherwise) jacket. She may have one in just about every color/texture finish, but why not start with basic black? And hey, this Silence + Noise hoodie/moto jacket combo will help you invoke Aria and A (or both, if you subscribe to that theory).

Aria's rarely seen without a statement necklace (heck, she was even wearing one in the noir-inspired episode!), and we know she loves to incorporate chains into her look. If this H&M necklace isn't quite your style, anything bejeweled and/or spiky will also work.

When she's not wearing pleated skirts or vintage dresses, ripped jeans (paired with a graphic tee) are her go-to pick. These J. Brand skinnies are classic with a touch of deconstructed cool about them. If jeans aren't your thing, you can go for printed leggings instead.

You're going to have to wear something really cool to go with your ripped jeans, and I think I've found it for you in the form of this Lauren Moshi T-shirt. Really, when you think about it, Aria's spirit animal might just be a zebra, what with her penchant for stripes.

SHOES. All of them.

Platform and gladiator? These Jeffrey Campbell sandals have a lot of look going on, and if "lot of look" isn't Aria's M.O., I don't know what is.