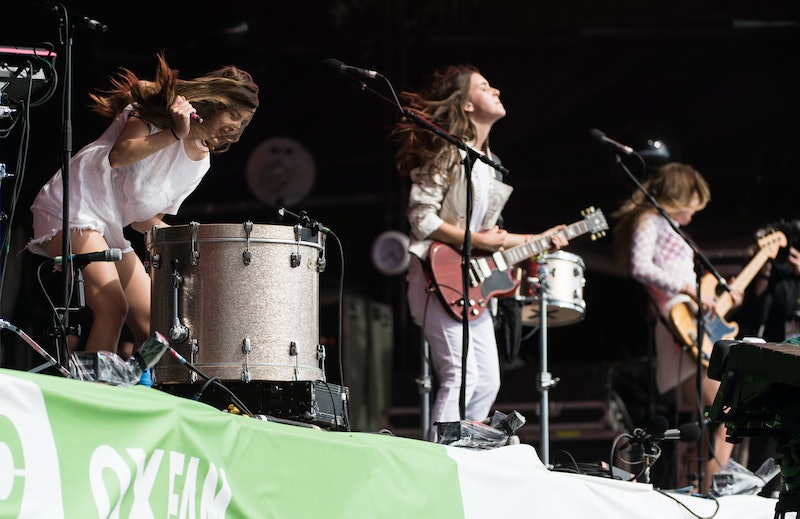 This year's Glastonbury Festival featured quite the tableau: Some of the hottest names in the music industry made an appearance on the Pyramid Stage (everyone from Justin Timberlake to folk pop/pop rock new favorite Haim was there), and as such, the celebrity turnout was somewhat formidable — there might even have been as many celebs in attendance as there were performing!

That said, we were treated to a lot of quirky, festival chic. Mud-covered summer-wear is probably as opposite from red carpet glam as you can possibly get, so it's quite a change of pace. Sophie Turner wins the award for most drastically different — her on-screen counterpart may go formidably fashionable in feathered black, but in real life she took to Glastonbury just like every other teenager: in an oversized sweater and acid-washed denim shorts.

With the exception of the rain boots that have become ubiquitous at the Glastonbury Festival, this year's celebrity crowd showcased some prime summer fashion. Short shorts (paired with Wellington boots, of course) reigned supreme, with quite a few sitings of slip dresses, crop tops, and fringed accessories as well.

Let's take a look at some of this year's best (or maybe "most interesting" is a better word for it) outfits:

Lowe turned out look after look this weekend (this shearling/sheer lace outfit took some chutzpah to pull off), and my favorite might just be this simple T-shirt/skirt combo. A well-deployed "I'm with" shirt never gets old, and she certainly wins the award for best rain boots.

I don't think I've ever loved tie-dye more than I do right here right now on Lana Del Rey.

She took to the stage in quite the metallic/pink ensemble, but her casual wear might be even better, as it features watermelon shorts. That match her perfect pink hair.

Alexa Chung just went full romper. This may be the romper-iest romper I've ever seen. Most couldn't pull it off, but the color's gorgeous (it reminds me a bit of Claire Danes' duds in Stardust), and her rain booties and sweatshirt around her waist make the look irreverently fun.

...And her take on equestrian chic

If rompers aren't your thing (and if they're not, I don't blame you), this equestrian-inspired ensemble might be more your speed. Only Alexa Chung could make a turtlenecked white blouse paired with a velvet blazer and muddy Hunters look this cool!

Instead of going for "jaunt around the stables" prep like Chung, Florence Welch went cowgirl. Her vest says it all, and her bolo tie-like necklace and aviators complete the look.

They may have rocked it onstage in all white (I especially loved Este's sheer dress, so with that in mind, let's put a moratorium on all ridicule concerning her bass face), but their offstage looks were just as interesting. What a cool melange of style from three very different sisters.

Leave it to Ms. Stella to look this put-together (oversized wellies notwithstanding) at a muddy outdoor music festival.