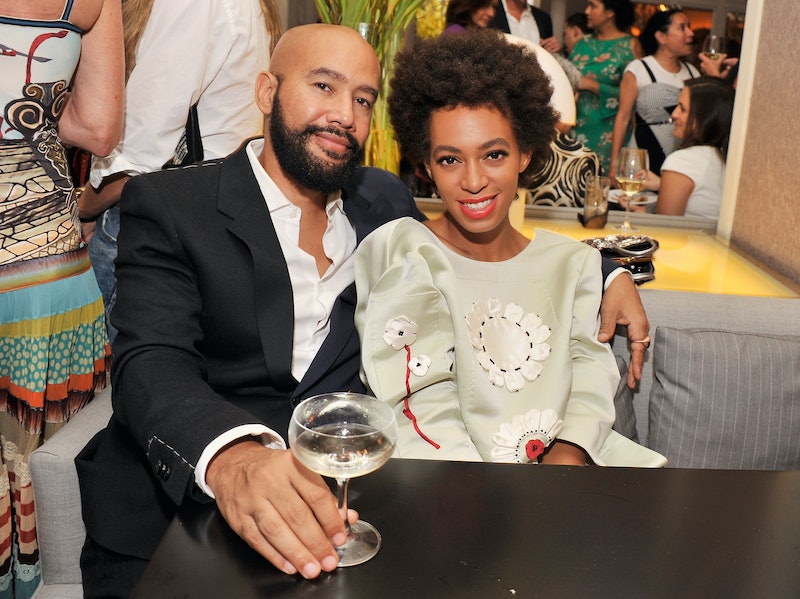 Is Solange a secret Fall Out Boy fan? The answer may be yes, since she pursued now-boyfriend, Alan Ferguson, five years ago around the same time he was directing the pop-punk band's music videos. Last week rumors surfaced that the Solange and Alan Ferguson might be engaged after they went on a romantic getaway in Jamaica to celebrate her 28th birthday. She posted (and has since deleted) intimate Instagrams of their trip but hasn't commented on a potential engagement. Either way, they seem to be together for the long haul, so let's get the scoop on the man behind the beard.

More than just Solange's sidekick, Ferguson is a successful music video director. His video credits include everyone from Katy Perry to John Legend to Miranda Cosgrove (yes, the Nickelodeon star). And of course he's worked with Solange's famous family members. In 2012, he won a BET Award for Best Video Director for the videos he co-directed for Beyonce's songs "Party" and "Dance for You." Perhaps she's the one who introduced them? Or it's also possible they met through brother-in-law Jay Z, who worked with Ferguson back in '96 on his song "Feelin' It."

No matter who introduced the couple, Solange deserves full credit. Despite a major age difference (he's 51!), she wasn't shy about making the first move. According to BET, Solange pursued Alan Ferguson first.

I’ve been in a relationship now for five years. Certainly, in the beginning I was the one who approached him so I have always sort of historically been one of those girls that goes after something that I’m into.

Atta, girl! I wonder if her big sis Bey played a role in shaping that feminist perspective. Or it could be because she grew up listening to Destiny's Child's girl-power anthems. Instead of waiting around for her Prince Charming, Solange didn't hold back. In that same interview, she said, "I’m not very old school... I have a lot of guy-like quintessential relationship qualities that I have had to work on."

Before Ferguson came along, Solange was married to Daniel Smith with whom she tied the knot in 2004 when she was only 17. They stayed together for three years and had a son together named Daniel Julez Smith Jr. Her son (who she posts the cutest photos of on Instagram!) is now nine and splits his time between both parents.

Although she's had her share of rocky relationships, it seems things have finally settled down. In March, Solange told Us Weekly , "Luckily, I dated all of the losers ages ago. My love life has been stable for a while." While no one knows whether Ferguson really did put a ring on it, I suspect it's only a matter of time before we hear wedding bells!