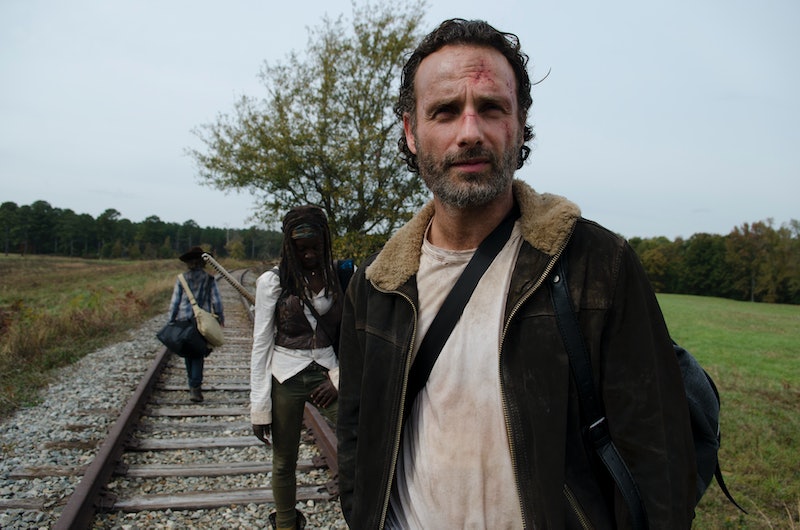 Tons of movies and books that take place after the apocalypse refer to people turning into cannibals. (I guess we really think highly of our fellow humans.) These sources of entertainment are founded in history since there are tragic, real-life accounts of cannibalism, like that of the infamous Donner Party. By the Season 4 finale, The Walking Dead gang was the definition of desperate, so it makes sense that the Internet is abuzz with theories that the people who run Terminus are really cannibals.

Cannibalism strikes a nerve with people more than a lot of things. You gotta have a tough gut to watch the zombie-apocalypse-based The Walking Dead (especially during this past season), but there's something even more gruesome about having to watch people eating people. Sure it's all fake, but still.

A lot of the show's cannibalism theories stem from the comics they are based on. But The Walking Dead often diverges from its source material — characters are created, story lines are removed, and plots are added — which makes it hard to make a simple comparison. The Walking Dead showrunner Scott M. Gimple recently discussed the upcoming season five and the comparisons to the comics:

I will say that there may be some slightly familiar structural turns. But for the most part, it is going to be brand new versions of the comic story.

The phrase “brand new versions of the comic story” leaves a lot to interpretation. So yes, there are cannibals in the comics, but what clues has the TV show given us? At first, Terminus was a mystery, but also a beacon of hope. The signs were friendly and they were everywhere — so it made sense to head that way and hope to regroup with the rest of the prison gang. Even when Rick's group arrived, it appeared welcoming.

And since our main characters had been so desperate, they were willing to succumb to a seemingly safe, homey place.

Now we know for a fact that the people of Terminus are sinister. Why else would you lure people to you and then immediately lock them up in a train car?

In the Season 4 finale, we got to see more of Terminus than just the happy, smiley welcome crew. As Rick, Daryl, Michonne, and Carl — the most badass collection of people to ever exist — ran through Terminus, we saw what goes on beyond that flowery entrance.

The room of candles and religious statues offered us a glimpse into what Terminus is really about. Since the people of Terminus were leading our band of badasses with their bullets, they may have even wanted them to see this room. Names of presumed dead people were written on the floor and "NEVER AGAIN. NEVER TRUST. WE FIRST, ALWAYS" was written on the walls. So, does this temple-looking room mean cannibalism?

Although it’s hard to definitively prove, anthropologists believe there are examples of religious ritualistic sacrifices and cannibalism in history — including the Aztecs. Sometimes after a severe trauma (and I think the zombie apocalypse can be categorized as such), people turn to religion. Perhaps the people of Terminus aren’t just cannibals for survival — they could believe they are doing it for some higher purpose. And based on their elaborate setup, it would seem that this isn’t your run-of-the mill cannibalism (if that is indeed what they are up to). If the people of Terminus are placing ritual before cannibalism, they could be drawn to different people's traits in an attempt to make themselves stronger against the zombies. So watch out, Daryl, Rick, and Michonne.

There are a ton of fascinating theories about how new characters will affect our post-apocalyptic crew, but what about the characters we have grown to care about? My issue with the people of Terminus being cannibals is — why would you put such a large group of people into the same train car? You'd expect they'd make an escape plan, especially since Rick indicated they were friends with Maggie and Glenn. There could be something even sicker at play here — maybe Terminus wants to turn people into cannibals. If you leave a group of people in a train car with no escape for long enough, it could happen. Are our favorite characters really above eating people?

The beginning of the Season 4 finale showed Rick in a haze, with his face and hands completely covered in blood. (Look at that beard!) A flashback showed how that came to be and it was just Rick in full awesome-Rick mode, taking no prisoners and biting Joe's throat out.

I can’t imagine Rick ever eating people, but we’ve seen him lose his sanity before (hey, remember when he talked to dead people on the phone?) and we also know that he’s willing to do anything to protect his family ... even when it’s really dark.

Since we have to wait until fall for the season five premiere, tune into AMC's Talking Dead special on Sunday, July 6, where hopefully host Chris Hardwick will inquire all about cannibals and the other horrifying things that might be in store when the series returns.