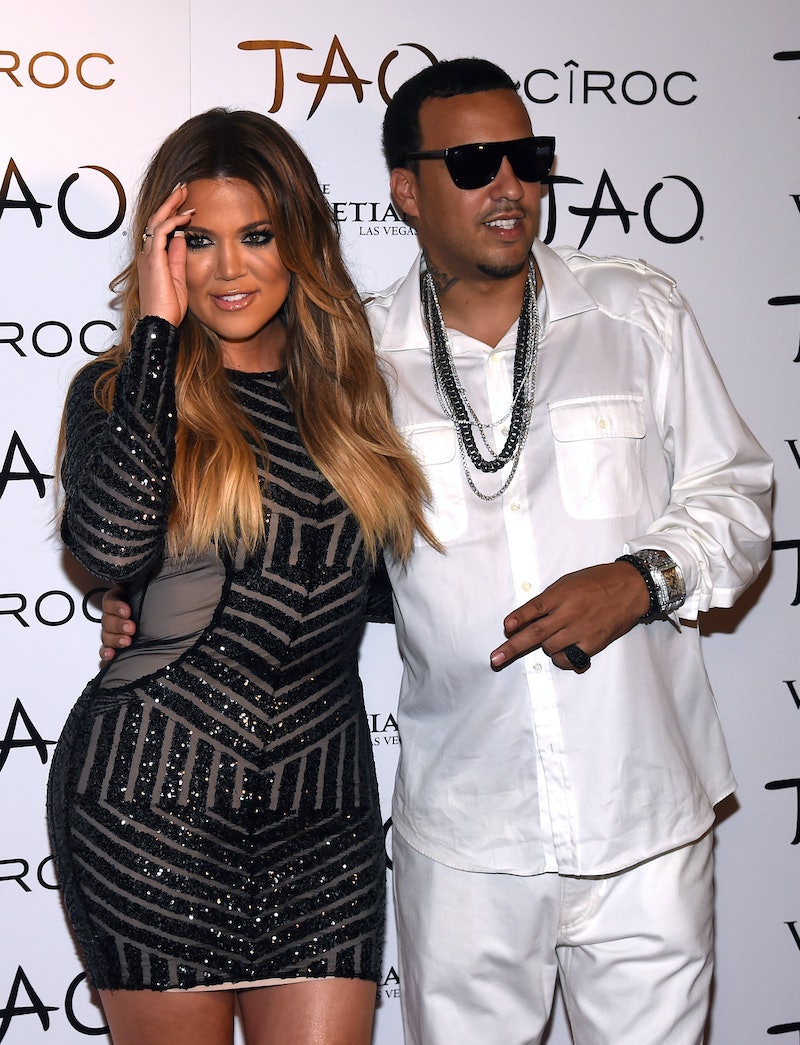 Look, I'm always up for a good Kardashian mocking session (did you see how crazy they went for North West's first birthday?) but, sometimes it's time to draw the line. Case-in-point: Khloe Kardashian revealed recently that her new boyfriend French Montana makes her happy, and, yet, the tabloids still have a field day with hating on their relationship and starting rumors about it. Although the rapper does deserve some flack for glorifying guns and alcohol, by and large much of the criticism people are throwing his way is unfounded. Some of the judgement is allegedly even coming from Khloe Kardashian's own family, with claims that he's using her being flung about.

But whatever anyone's personal opinions are about Montana, he's making Khloe happy and that's the most important thing. At her birthday party in Vegas (the second one she's had, because she had to try to outdo North), Khloe opened up about her boyfriend to Us Weekly. "He is just funny. He's light and it's easy. That's what I need right now."

No kidding. Khloe's had a rough go of it lately and deserves a bit of lightness after the heaviness of her marriage falling apart. "It's fun. I like how he's always happy," Khloe continued. "Smiles are infectious. They're contagious. I like that. I just want more positivity in life."

Anyone who makes Khloe feel that way is A-OK in my book.

After all, remember everyone hated Kourtney Kardashian's boyfriend Scott Disick in the beginning? Now Lord Disick is one of the best parts of Keeping Up with the Kardashians.

Will Montana ever get to that point in the family? Maybe he could — but first, everyone needs to stop hating and give him a chance.

More like this
Khloé Kardashian Is Reportedly Dating A Private Equity Investor She Met Through Kim
By Jordyn Tilchen
Britney Has Been Granted A Restraining Order Against Her Ex-Husband
By Bustle Staff
Khloé Kardashian Set The Record Straight On A New Dating Rumor
By Grace Wehniainen
Who Is Betty Who Dating? The Australian Singer Is Married To Her Tour Photographer
By Radhika Menon
Get Even More From Bustle — Sign Up For The Newsletter