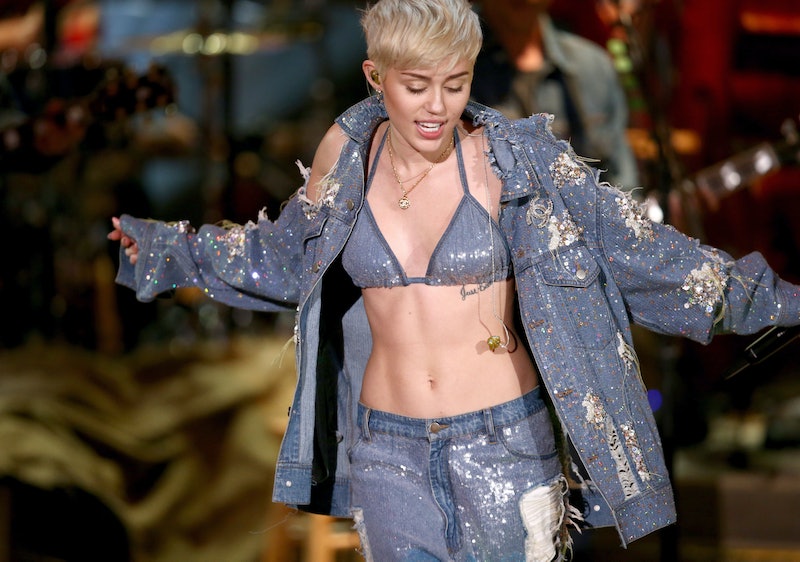 If you continue to follow Miley Cyrus news you've no doubt heard the story of the April death of her dog, Floyd. It's been a road of public grief for Cyrus, one that many pet owners can relate to on some level, and now she's found another way to remember her beloved dog: Miley Cyrus got a Floyd tattoo.

Floyd died in early April on what Cyrus referred to as the "2nd worst day of [her] life." His death was followed by an entire Floyd-related saga that lets you know just how devoted Cyrus was to her dog. She burst into tears during a Boston stop on her Bangerz tour; her mother surprised her with a new puppy that she then had to find a new home for because she wasn't ready to move on. She also wrote an open letter about the loss:

i keep asking why would the world take my sweet boy from me? a question an infinite amount of mothers before & after me will ask after losing their precious baby… I was Floyd’s mommy. I don’t know when the regret and the guilt will fade… I don’t know if it ever will. I feel like I let my boy down. my job was to protect him & I’m not a person that takes failure lightly. death lightly. love lightly. everything I do I do to the fullest. mostly loving. I love so much and so hard it hurts, so when I lose it is excruciating. [sic]

On top of memorializing Floyd during throughout her tour, Cyrus has now given Floyd a more permanent place on her body.

More like this
17 Years Ago, 'Hannah Montana' Reportedly Almost Cast This 'Gossip Girl' Star
By Grace Wehniainen
Selena + Chef Season 4 Was Filmed At Hannah Montana's Old Malibu House
By Jake Viswanath
Why Eurovision 2023's Host City Won’t Be Revealed For A While Yet
By Sam Ramsden and Rachel Mantock
15 Matching Halloween Costumes For You & Your Dog
By Kirsten Nunez
Get Even More From Bustle — Sign Up For The Newsletter