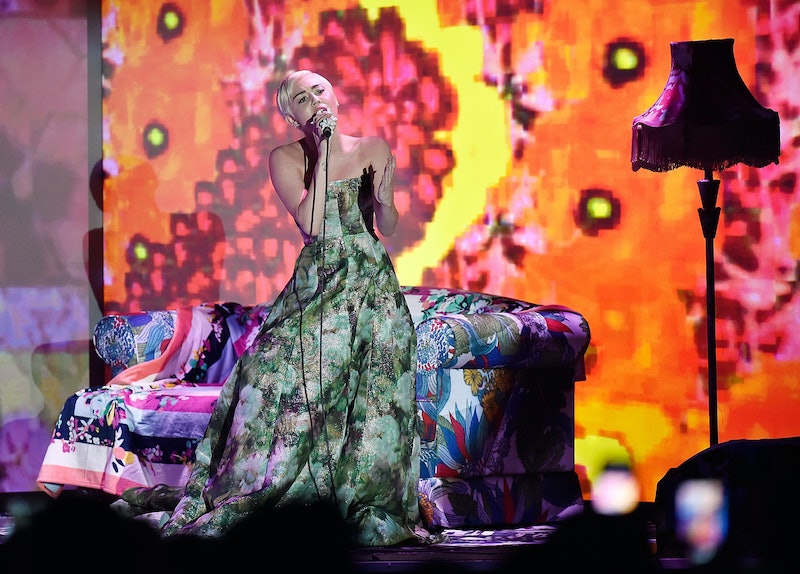 As many of you Smilers or general Instagram users would know, Miley Cyrus just got some fresh ink of her deceased dog, Floyd. Although I would have approved of this tattoo as it’s meant to be symbolic of her profound love for her former pup, once again I am deeply disappointed with the outcome.

From the completely bizarre cat she got tattooed on the inside of her bottom lip, to all of the awkward finger tattoos that look like they were drawn on by a kindergartener, I’m starting to question all of her tat decisions. All of the quotes, the picture of her grandmother, and even the dream catcher on her side are thoughtful and a little classier, but she has really taken things to a new level with her tattoo to honor Floyd.

The tattoo, which is circular in shape with a supposed image of Floyd’s profile as well as an altered form of a Beatle’s song lyric reading, “With a little help from my fwends,” is pretty sad looking. And I don’t mean that in a way that I want to mourn Floyd with her but that I wish she would apply for that TLC show, America’s Worst Tattoos, to get it corrected.

To be honest, the dog pictured doesn’t even look that similar to Floyd, excluding the large ears, and the outline of the speech bubble around him is horrendous. It’s like those times when you draw something and want to go over it again to make it darker but end up accidentally drawing the line in a completely different place. Basically, the lines are not clean at all.

Considering the fact that she was so sad about the loss of Floyd that she cried on stage, continually talks about him on social media, and even has a shrine at her house dedicated to him, you’d think she would have planned out a more sentimental tattoo. Instead, it looks like she’s wearing a clear sticker on her body.

If anything, I hope that she gets another, more professionally done tattoo for Floyd. People get tattoos of their dogs all the time and they can look extremely realistic. Even a Sailor Jerry style traditional tattoo of Floyd would have been better than what she has now. Maybe a little color would be nice as well.

Also, I won’t forget to mention the fact that two of her friends got the exact same tattoo on the exact same part of their body as Cyrus did. Having other Floyd fans is great, but Cyrus should really memorialize her dog with something different than what all her pals have. Hopefully she has something else planned for the future, because this is how I feel: