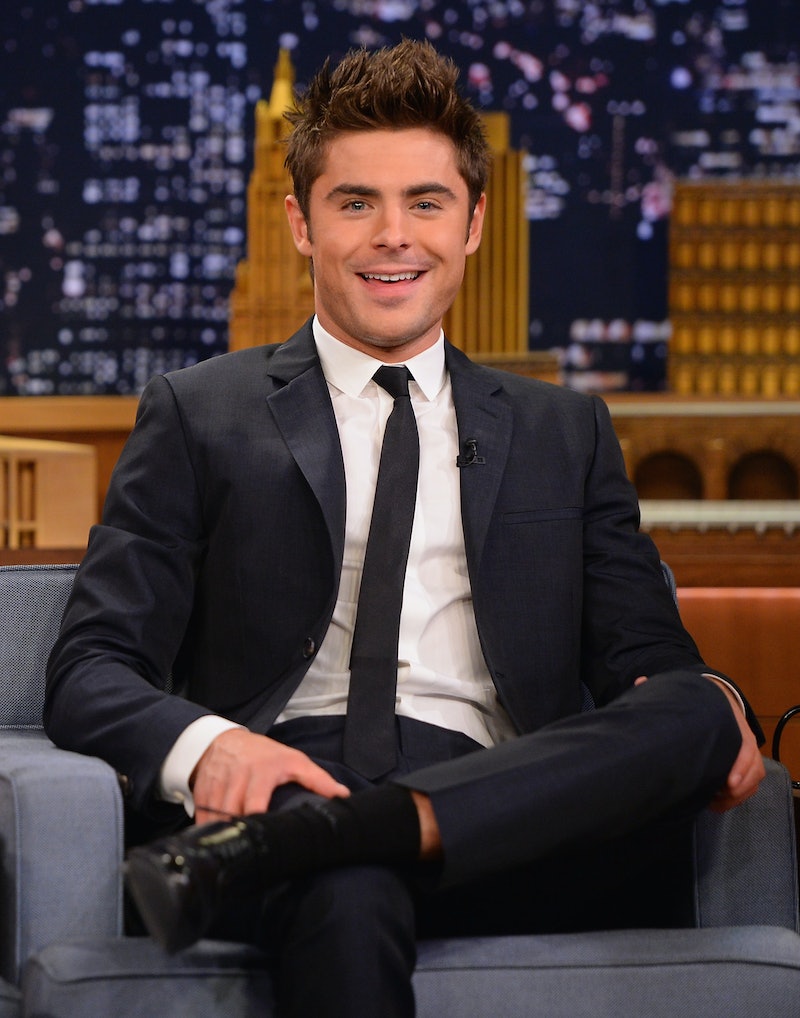 In case you missed it, despite earlier reports that Zac Efron and Halston Sage were dating, it appears that Efron's real lady love is Michelle Rodriguez. Over the Fourth of July weekend, Efron and Rodriguez were spotted kissing while on vacation in Sardinia, which came as a huge surprise to most of us. After all, there aren't a whole lot of pictures of Efron and Rodriguez out there. And wasn't Rodriguez just dating Cara Delevingne? What are Rodriguez and Efron playing at here, giving us what has the potential to be one of the hottest pairings of the year with no build-up or explanation?

As great as it would be to see Efron and Rodriguez as a couple, is that really what's going on here? If there is one thing that you learn quickly in the acting world, it's that a kiss really is just a kiss. While we wait for either Michelle Rodriguez or Zac Efron to confirm that they're actually in a relationship — or at least make continual candid appearances together like the "unconfirmed" pairing of Andrew Garfield and Emma Stone — then it's worth giving them the benefit of the doubt when it comes to that totally buzz-worthy kiss.

After all, there are plenty of things that could explain this.

1. They're dating each other.

The biggest and easiest explanation is the one that everyone is going with: Zac Efron and Michelle Rodriguez are dating. Was this their magical first date or have they been stepping out in secret behind our backs this whole time? Which one of them are we more jealous of? Have you stopped fanning yourself yet? Honestly, this poses more questions than it answers.

2. He is helping her through her break-up.

The rumors of rocky times in Cara Delevingne and Michelle Rodriguez's relationship have been pervasive and this little vacation with Zac Efron could be all the proof we need that Delevingne and Rodriguez are done for good. Maybe Efron is just being a good friend and trying to help Rodriguez through a very hard breakup. Nothing will make you forget about losing your girlfriend like making out with Zac Efron.

3. She's kissing him for good luck.

Perhaps this photograph was taken mere minutes before Zac Efron was about to engage in a swimming contest or go diving or just play poker on the deck. Rodriguez could have just been giving him a good luck kiss so that he could destroy his enemies and come out on top. Bet on it.

We could be making too much of a presumptuous leap here. Maybe Zac Efron and Michelle Rodriguez aren't dating... yet. We could have witnesses their first kiss in that photograph, so done to see if they have any chemistry or if it's just going to be random flirting and beach trips for the rest of their relationship. That kiss could very well have destroyed any potential spark between them.

5. It was a totally platonic kiss.

Just like some relatives kiss each other on the mouth (and, no, I'm not talking about Angelina Jolie and her brother), so too can some friends kiss each other on the mouth. In fact, kissing your friend is a lot better than kissing your relative. Maybe we just missed Efron and Rodriguez getting so close that a kiss on the lips is just their ultra friendly way of saying hello, goodbye, and cheer up.

Since people are taking this as definitive proof that Delevinge and Rodriguez have broken up, maybe Zac Efron is acting as a willing rebound. There's no way that Efron and Rodriguez can't know, and expect, the paparazzi to be around somewhere, so maybe they staged this kiss hoping that it would get back to Delevingne and make her realize what she's missing. You're never too old for high school tactics.

7. They're just messing with us.

Along that same vein, maybe Efron and Rodriguez noticed the paparazzi and saw their golden opportunity to make the world lose its collective mind. They're both probably sitting somewhere reading all the news stories about how they're totally dating and cracking up at a prank well-executed. Very funny, Rodriguez and Efron.

More like this
Michelle Heaton’s Husband Is Her Biggest Supporter
By Darshita Goyal
Selena Gomez Confirms She's Single Amid Drew Taggart Dating Rumors
By Martha Sorren, Jake Viswanath and Jack Irvin
The Bachelor’s Christina Mandrell Comes From One Of Country Music’s Most Famous Families
By Brad Witter
Nicole & Chris Hinted They’re Still Together After 'Married At First Sight'
By Brad Witter
Get Even More From Bustle — Sign Up For The Newsletter
From hair trends to relationship advice, our daily newsletter has everything you need to sound like a person who’s on TikTok, even if you aren’t.