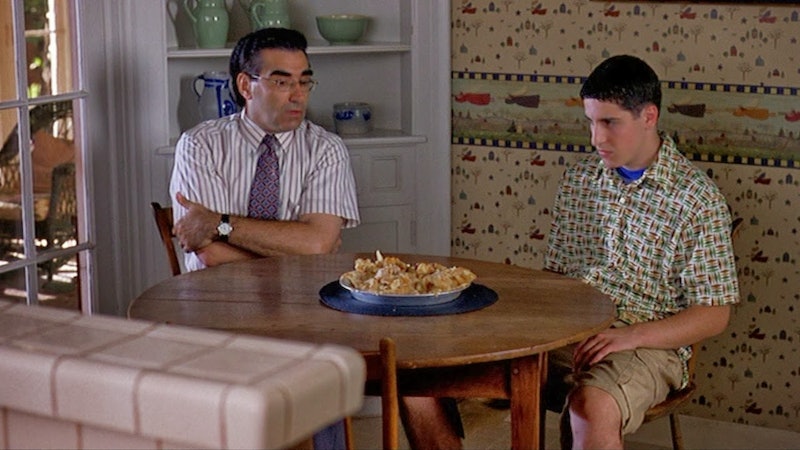 Surprisingly pie shows up a lot in films and TV. Well, it's not that surprising — pie is delicious after all. But not all movies celebrate pie. In fact, some ruin pie. I'm of course talking about American Pie and its infamous pie scene. If the part where Jason Biggs's character Jim Levenstein asks what third base is like and is told it "feels like warm apple pie" didn't spoil the treat for good, the scene where Jim actually does the nasty with his mom's homemade apple tart will for sure. It's hard to look at the dessert the same way after watching the movie.

Biggs, who is known to be rather crass on Twitter these days, even uses the scene to excuse his sometimes downright awful musings. "To everyone freaking out about my tweets: you know I put my dick in a pie, right?" the actor tweeted in 2012. That he did, and now that it's been 15 years since American Pie first came out, we're celebrating the coming-of-age story and it's unforgettable pie-ruining scene.

But it's only fair to cut the movie a bit of slack. After all, it's not the first movie to spoil the flaky dessert and it won't be the last. So in honor of American Pie's 15th anniversary, here are seven other movies that also ruined pie forever.

Revenge is a dish best served in pie form.

It's hard to stomach blueberry pies after watching this puking domino effect.

Just one look at this movie's poster is enough to ruin chicken pot pies forever. Interestingly this wasn't considered graphic enough for the MPAA to ban, so maybe they're all secretly cannibals.

Speaking of cannibalism, remember the Johnny Depp/Helena Bonham Carter meat pie baking team? Good times. This film ruined pies twice: Once when Mrs. Lovett sings about having the worst pies in London and makes a batch while cockroaches crawl all around.

Then it obviously ruins the dessert a second time when they start stuffing humans into the crusts.

Although Keri Russell's character makes pies look artful, they are tinged with the sadness of this movie. Essentially it turned eating pies into a melancholy experience for anyone who's viewed the film.

WILLY WONKA AND THE CHOCOLATE FACTORY

It may not have ruined pie for you, but it certainly did for Violet Beauregard after the blueberry pie course of Wonka's chewing gum turned her into an actual blueberry.

Technically this is a TV show, but let us not forget that what really went into these pies was rotting fruit from the back of Ned's kitchen. At one point David Arquette even comes over to bake an Offal pie. (Translation: animal innards).

In all seriousness though, this movie ruins pie if just for the fact that Pushing Daisies is off the air and everything is terrible.

Feel sick enough yet? Or are you totally ready to get baking?

More like this
15 Intriguing Movies On Netflix That Are Based On True Events
By Mary Kate McGrath, Shannon Barbour and Grace Wehniainen
'Elvis,' 'Walk The Line' & 10 Other Movies Where The Actors Actually Sing
By Radhika Menon
Everything To Know About 'My Big Fat Greek Wedding 3'
By Grace Wehniainen
Alicia Silverstone Has Recreated An Iconic 'Clueless' Scene
By Frances Stewart
Get Even More From Bustle — Sign Up For The Newsletter