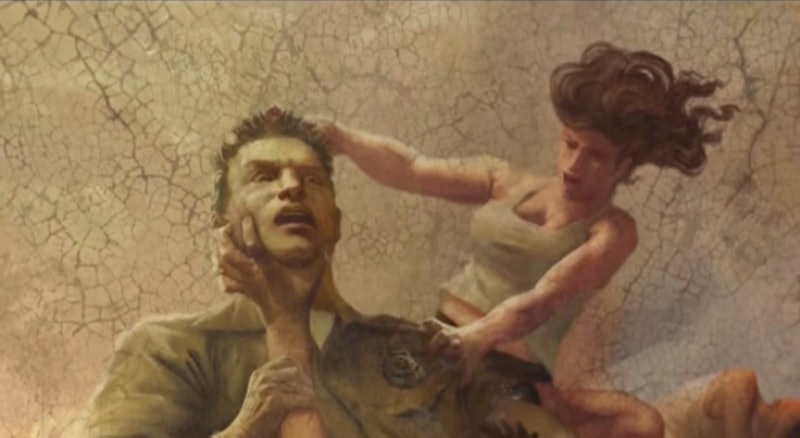 Over the past several years, television has emerged as our country's most exciting — and surprisingly respectable — art form. Sure, there's still a lot of crap crowding the air waves, but thanks to the folks at HBO, Netflix, FX, AMC, and Showtime, we've got more quality options now than ever before, including HBO's new drama, The Leftovers . But if we're speaking of television in terms of "art" now, then title sequences are to TV what Banksy is to painting. Title sequences are cool. They're neat, artsy, brief ways for someone to put their signature on a popular show.

Game Of Thrones probably has the most widely recognizable title sequence on television at the moment (and certainly the most hummable). But it's far from the only one. American Horror Story , Mad Men , Masters Of Sex , True Blood , True Detective , and The Walking Dead have some of the most eye-catching intros on TV right now. Heck, even terrible shows can have great title sequences these days. It's hard to pinpoint exactly when title sequences became the trendy visual art pieces they've become, although popular wisdom holds that Dexter had something to do with it.

The Leftovers is but the newest show to join this trend. Although the pilot episode lacked a title sequence, it was on full display in this past weekend's second episode. In case you missed it or just want to check it out again, here it is:

So what are we seeing and hearing here? Let's break that baby down.

Some people are floating away.

This is clearly a visual representation of the Sudden Departure. In the show (and book) those who were taken simply vanished into thin air, but there's obviously no way to show that in a static painting like this. Plus, having the people float away means that their loved ones have to watch them leave, and we get heartbreaking facial expressions like this one.

Some people are sad about it.

Obviously the Sudden Departure has lots of people depressed, including this forlorn father and mother, watching their infant ascend into the sky. Lots of characters in The Leftovers are in a persistent state of ennui, even three years after the mysterious event.

Other people are angry about it.

Those who aren't crying are yelling. When you have no way to explain the instantaneous disappearance of 2 percent of the world's population, that's bound to make some people angry. It is curious, however, that this man is shaking his fist at the prostrating person in front of him, and not at the heavens. What did the kneeling guy do to make the redhead so upset?

Some people are just having sex.

Those who aren't crying or yelling are just sitting around having sex. Because what else can you do when the world falls apart around you? This is the classical painting version of that weird sex party Jill went to. Jill's friends find solace in carnal pleasure, just like these fornicating figures. (Bonus points for depictions of diverse couplings — and thruplings, for that matter.)

They're all inside a dome.

As the camera pans away from the images, we finally realize that they're all painted on the inside of a dome. (This again brings to mind the Game Of Thrones title sequence, which was designed to appear as though the map of Westeros existed on the inside of a sphere as opposed to on the surface of a globe.) As we draw further away, we also realize that all the floating figures are converging on one, glowing point in the middle of the cupola.

This is interesting because the show (and the Tom Perrotta novel it's based on) are very explicit in explaining that the Sudden Departure was not the Rapture. There was no rhyme or reason to those who were taken, and just as many of them were terrible people as good ones. So why, then, is the title sequence so overtly religious?

I would say it's supposed to be ironic, but thus far The Leftovers is pretty irony-free; it's utterly sincere in both its sturm and its drang. Could it be a clue that co-creator Damon Lindelof (of Lost fame) is building towards a conclusion that involves godlike beings and a holy yellow light? Will the series end with all the Departed roaring back out of the light as infernal black smoke monsters?

Perhaps the title sequence is simply using a familiar image (in this case, a very Sistine Chapel-like mural) to convey all of its themes in one place: loss, grief, anger, sex, love. That's pretty much humanity in a nutshell right there. And no matter how the figures in the painting are reacting, they're all trapped within the same dome — just like how the characters of the show, no matter how they were affected by the Sudden Departure, are trapped together in the bizarre, off-kilter remnants of what used to be their tidy, predictable lives.

The music is by Max Richter.

The music that accompanies this beautiful and creepy intro was written by German and British composer Max Richter. The 48-year-old musician is famous for his neo-classical style — just like the painting in the sequence. He's an interesting hybrid of genres, having studied at Royal Academy of Music in Italy, but also being influenced by modern punk and electronic music. He's very prolific, having written for albums, stage, opera, and ballet. Onscreen, his compositions have been featured in films (like Waltz With Bashir), television shows (like HBO's Luck), and trailers (like Ridley Scott's Prometheus ).

In February, Richter signed on to compose the music for The Leftovers. He was approached by Lindelof and director Peter Berg, the latter of whom had just seen a Broadway production of Macbeth that Richter scored. In addition to composing original tunes (like the theme song), previously recorded works of his have also been used in the show. You may recognize this song, "Vladimir's Blues," from his 2004 album The Blue Notebook, which was used extensively in the pilot:

Richter is composing music for each individual episode of the show — he won't be done with his work until mid-August, about two weeks before the final episode of the season will air. He has enjoyed the long process of television composing, as opposed to the compressed schedule of working on film, as it has allowed him ample opportunity for reflection:

It's a bit like seeing a sculpture as opposed to seeing a painting. A sculpture you can kind of walk around it and look at it from different angles. I feel like the composition for this show, and I guess the writing too, it's about revisiting the materials from a different perspective the whole time. That's really satisfying actually because it's nice, it's like you get kind of new surprises and new things, just from reflecting on it.

And, just in case you were wondering, here's what Richter's Leftovers theme sounds like when played on one guitar. It's less bombastic, but possibly even more haunting:

More like this
Everything To Know About 'Evil' Season 4
By Meguire Hennes
‘Squid Game’ Creator Hwang Dong-Hyuk Just Dropped A Major Season 2 Tease
By Brian Anthony Hernandez and Bustle Editors
Here’s How 'House Of The Dragon' Diverges From The Book’s Timeline
By Allyson Johnson
Everything To Know About 'And Just Like That...' Season 2
By Jack Irvin
Get Even More From Bustle — Sign Up For The Newsletter