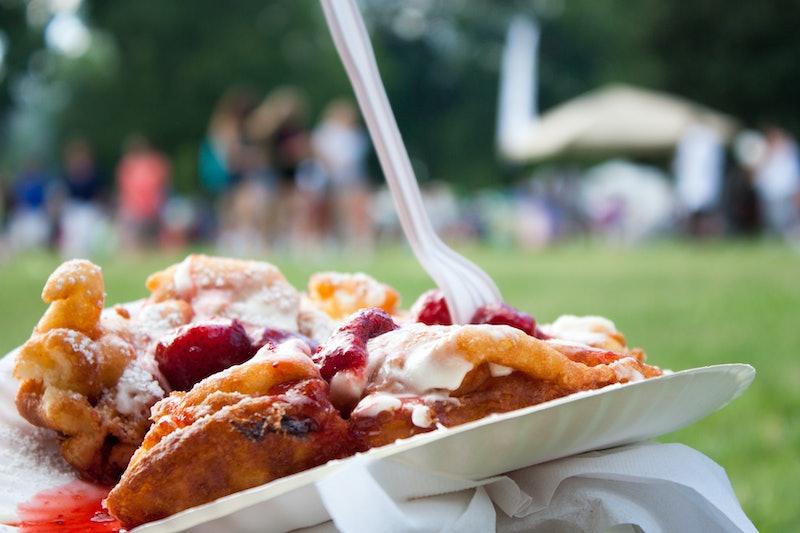 The state fair is kind of like Las Vegas. You tell yourself that whatever happens at the state fair stays at the state fair ... but it really doesn’t. Because just like Vegas, there are some things you just can’t erase so easily. (Like that giant turkey leg that took you an hour to eat, or the Twinkie dog sundae you savored in the hot sun.) And let’s be real: The state fair does NOT joke around with fried food. Anything is game, and almost all of it is delicious. The temptations are huge.

After all, it’s not like you came to the state fair to eat carrot sticks. You go to the state fair to ride those rickety roller coasters held together by gum and rusty nails, take sepia photo-booth pictures with your girlfriends, pay way too much to not win that huge stuffed Hello Kitty, and wash away all your regrets and sorrows with a beef sundae.

But you know what? We here at Bustle believe it’s more than okay to eat as many calories as you can in one day. It’s the state fair, for crying out loud! But if you’re really curious about the damage all that bacon and butter is doing to your body, here’s a ranking from the lowest to highest calorie intake.

Well, this explains why it's not that good.

At the Iowa State Fair, you can find this gorgeous rib embraced by juicy bacon. For how delicious it is, it's kind of surprising it's only 240 calories.

The Minnesota State Fair offers straight-up fried cheese. For 420 calories, that rivals a huge salad. Which one would you rather eat?

Even though you can find a fried Twinkie at just about any fair, the San Diego State Fair serves a pretty mean Twinkie; deep fried in batter and sprinkles with powdered sugar and chocolate sauce.

Why enjoy a regular Snickers bar when you can get it deep fried? This fried treat is another Minnesota State Fair staple. Doesn't look so appealing, but we're sure it's good.

Also at the Minnesota State Fair, you can find this lengthy meat in a bun. (Now get your mind out of the gutter.)

Considering how huge this thing is, 508 calories for a DOUBLE bacon corn dog isn't too shabby. Find it at the Iowa State Fair.

Apparently, fried Oreos are even worse for you than Twinkies, which has me a little worried. These fried morsels are brought to you by the Texas State Fair (and pretty much any state fair).

If you thought cheesecake on its own isn't really rich enough, just get it fried and smothered in powdered sugar at the Texas State Fair.

I've seen this invention all over the Internet, but the Tennessee State Fair has the most bragging rights to this "sundae." Comprised of mashed potatoes, roast beef, beef gravy, cheddar cheese, a cherry tomato, and a piece of garlic bread, it's no surprise this clocks in at 710 calories.

I'm not sure why you would want a simple pork chop at the fair, but hey. This guy at the Iowa State Fair seems pretty happy about it.

When you order this at the Iowa State Fair don't be fooled by its simple name — this chicken on a stick is NOT just chicken. It's chicken, a couple cups of butter, and sweet, sweet batter.

Not getting funnel cake at the fair is like going to the beach without getting a bucket-full of sand in your tote bag. But alas, it comes with a caloric price. Find this at the Texas State Fair.

This is Iowa State Fair's newest frankenfried food! It's like everything you dreamed of and more: Pulled pork, beans, coleslaw, and BBQ sauce ... all served in a waffle cone.

You can find this beastly bird leg at the Iowa State Fair. (It's one of Ron Swanson's favorite meals for a reason.)

The Iowa State Fair takes mac 'n cheese to a whole new level. Served with bacon bits and sour cream, this is your favorite comfort food on steroids. Can you say WORTH IT?