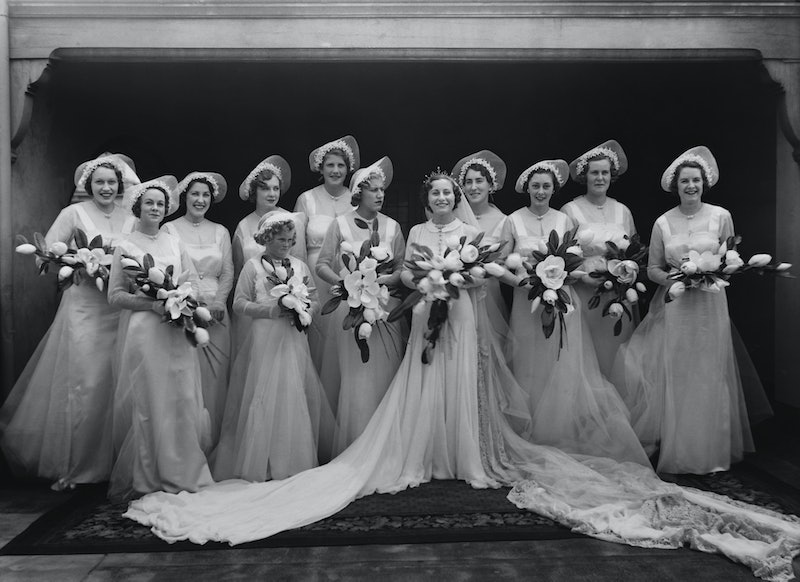 Ever wonder what bridesmaid dresses used to look like in the 1960s? 1930s? 1890s? If you think bridesmaid dress styles haven't changed in forever because they're still all kinds of retro and ridiculous, you need to take a look at these pics. I've dug deep (okay, I mainly scrolled through Flickr pages, but they're a great source) and assembled wedding party photos from eras spanning from the mid-1800s all the way to the 1970s.

With bridesmaid dresses becoming more and more casual and tailored to each girl's individual style, these pics might even make you long for the romance or formality of bygone eras. Who hasn't wanted to wear 1950s-style hoop skirt at one time or another? Or (earnestly) wear a princess-worthy violet ball gown while carrying a basket of roses? Although, I have to say, today's creativity is pretty unprecedented: I doubt many brides had thought of Disney princess bridesmaid dresses until recently. I hope you enjoy gawking at these old photos. It's a little weird to have all these, sometimes candid, images of other people's families at your disposal, but together, they paint a compelling picture of how styles have changed throughout the years.

In the mid-19th century, ball gowns and long sleeves were de rigueur.

Maids and Matrons of Honor often wore white along with the bride, a tradition that has mostly disappeared.

During the Edwardian era, hats were no joke and smiling was not in fashion.

When was the last time you've seen so many tiers on a dress?

During WW2, weddings — and bridesmaid dresses — were simpler for money-saving purposes.

In the '50s taffeta reigned supreme.

Mod fashions made their way into wedding parties, too.

I'm trying not to think of Little Bo Peep, but it's really hard...