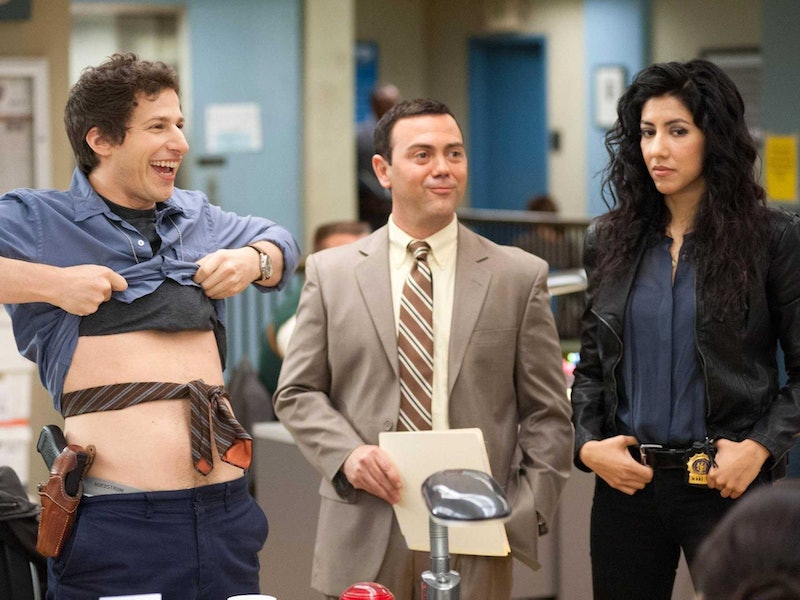 So! A bunch of fancier-than-us press folks were invited to the set of Brooklyn Nine-Nine today, and in their investigative work they came upon a few new bits of information about season two. For instance: did you know there's going to be a time jump between the finale and premiere? It's true — and it leaves plenty of room for stuff to go hilariously wrong.

Much of that hilarity, no doubt, will center around the fate of the two couplings we saw take big steps in the finale: Jake and Amy and Gina and Charles. But given that this is a workplace show, the former's still-budding romance is "not going to be the main focus of the show," explained executive producer Mike Schur. Nor will the latter's hook-up be glossed over. "[Gina and Charles' encounter will] play into the premiere and the early part of the season," said Schur.

Still, budding and/or awkward romantical dalliances aren't totally out of the cards, as Schur added "it's going to be one of the elements of the show we're going to follow as the year goes on." And as evidenced by some of the other writers here at Bustle, it's something people really want to see. But what about those friend-romances and other dynamics that the show has worked so hard to foster? How will they be affected by a time jump? We've endeavored to find out (and by that we mean we made some stuff up. Because it's fun and also our job).

If there was one relationship that really hammered home in season one, it was that of Holt and Peralta. Jake and his boss have an idiot son/fed-up father dynamic that's equal parts endearing, aggravating, and entertaining. But now that Holt's spent months doing the FBI thing, undoubtedly that's going to change a bit. Will Peralta come back cocky and self-assured (more so than normal)? Probably. And how's that going to fly with Holt? Probably not so well. In order to keep it fresh and not repetitive, though, there's got to be something that flips the script in this newly re-established power shift. Will Holt feel insecure? Will people actually respect Peralta now? And what will happen if/when — horror of all horrors! — Peralta comes back with some useful experience and knowhow? That's what we want to see, B99. Give us a good ol' fashioned role reversal (but true to character, natch).

With Peralta out of the office to distract her, no doubt all of Santiago's attention will be foisted onto Holt (also maybe Rosa Diaz in some capacity, but that's a post for another day: please make those two unlikely friends!) and her obsession with getting ahead. A lot can happen to a career in six months. Maybe, just maybe, these two have found a balance to Santiago's eager-to-pleaseness? Even better if they become unlikely confidantes and respected colleagues — many wouldn't that pull the feather out of Peralta's perma-jokey cap? This relationship, as it stands, feels the most immature of the bunch so we'd love to level the playing field and find a mutual ground of respect. How about we give Santiago a promotion? Make her more of an asset and an ally to Holt? Besides you KNOW that would drive Peralta nuts upon his return.

Aww, what a wacky little bromance these two have. But we cannot imagine that Boyle will take all that well to Peralta's absence. In fact, he may even come to resent him for it. And that sort of tension — a breakaway from Boyle's usual sing-songy, just-so-in-friend-love with Peralta dynamic would certainly cause both of them to look at themselves and their situations and grow as people. And, you know what? We just know these two crazy kids, despite the hurdles they face in such an endeavor, would work it out in the end. Back and better than ever!

We need more of these two like the earth needs sunshine after the rain. For us the two stand-out characters of the season (and that is no small feat on this series LEMMETELLYA) deserve their own spin-off where they go undercover together or something but that would involve, y'know, some major storyline changes so we won't suggest it anymore. That said their scenes together were positively hilarious and we'd love to see more opportunities for them to interact in scenarios together. Perhaps Gina takes on a bit more of the office paperwork and mucks a bunch of stuff up. Maybe she even becomes interested in joining the police academy (oh god can you even imagine?) and needs a mentor to get into ship-shape, fostering an unlikely bond between the two — and a new outlet for Gina to vent her sociopathic frustrations. Heck maybe she'll even babysit his kids to hilariously disastrous affect. Hey, a girl can dream, right?

The commitment these two have to being, essentially, Brooklyn Nine-Nine's equivalent of a Jerry/Gary/Larry doubleteam is impressive. Now that they've been promoted, we're sure they're going to needle and nuisance their way into many an unfortunate scenario and for that we are very grateful. Just more of them, full stop. That's all we ask — and the grosser the better.

More like this
Twitter Is Very Torn About The Winner Of 'Dancing With The Stars' Season 31
By Jake Viswanath
'Cheers' Stars Pay Tribute To Kirstie Alley After Her Death To Cancer At 71
By Jake Viswanath
17 Photos Of The 'Wednesday' Cast Vs. The 1991 'Addams Family' Cast
By Grace Wehniainen
Everything To Know About 'Monarch' Season 2
By Gretchen Smail
Get Even More From Bustle — Sign Up For The Newsletter