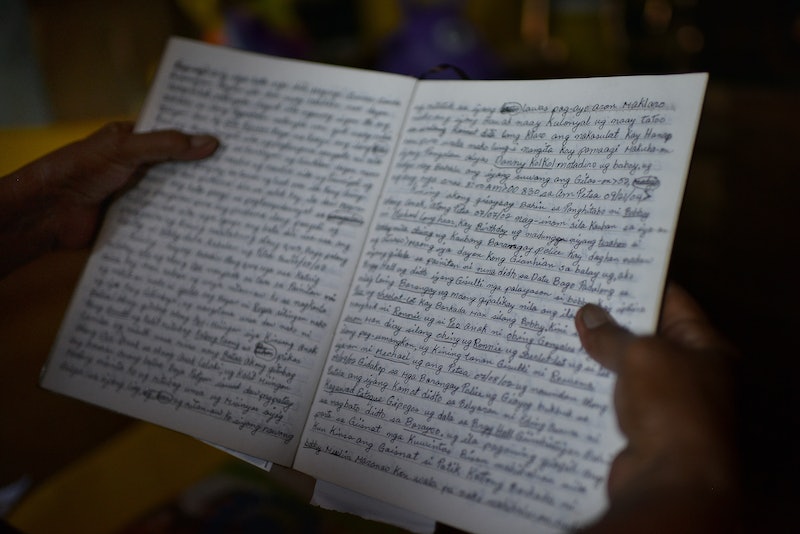 As writers, our love for prose didn’t just materialize out of thin air. It started off quietly, maybe with a short story or a poem we bookmarked in high school. Then that love grew, and kept growing. We fed this love with essays and novels, with stanzas, all-nighters spent inhaling book after book. Even if we didn't know it, every time we left a bookstore, our lives were probably going change again; our perspectives would flourish, shift, and mature.

Creating and reading go hand-in-hand, and this healthy relationship teaches us how to become better writers and critical thinkers. Without the guidance of other minds, we can't grow as writers. We won’t find as much inspiration, and we certainly won’t get that extra push we need.

As a freelance writer and poet, my bookshelf is the most important part of my process (along with actually sitting down and, like, writing words). On it, I will find works by the writers who motivated me most to pursue what I love: the authors who taught me everything I know about the craft; the women who revolutionized fiction, poetry, and everything in between. Here are some of those fantastic women, who'll inspire you, too — especially when you need that extra push to go.

It’s hard to write morbid stories well. I know we have Stephen King and Bret Easton Ellis, but I’m talking about beautiful, morbid stories. It takes skill. It’s also not very common to find yourself reading a story that is so hyper-observational, you almost wonder if you’re reading nonfiction. Stories like “A Good Man is Hard to Find” tug you along so mercilessly, so surreptitiously, you have no idea what is to come until you’re reading the very last words. O’Connor’s description and realistic dialogue are what hold her stories together, and what make them so wonderfully monstrous.

2. Marilyn Chin for voice and imagery

In poems such as “How I Got That Name,” Chin explores familial and cultural barracks, stating, “And there I was, a wayward pink baby, / named after some tragic white woman / swollen with gin and Nembutal.” Her sarcasm makes it possible for this poem to successfully tell a story, as well as provide feminist criticism without it become too preachy or political. Images such as “swollen with gin,” or later on, “a tomcat in Hong Kong trash” also give us pointers on what makes a vivid image work for the poem. I was lucky enough to take a class with Chin, and she was gently ruthless about figurative language. If it didn’t work, why bother?

Morrison’s novels are harrowing and hard to read. Beloved , for example, is a story about a runaway slave who lives with the ghost of her dead baby daughter. Its ability to dip into magical realism is made possible by its structure, since the story is incredibly non-linear, refusing to adhere to any particular time frame. In fact, sometimes it’s hard to detect who is narrating, because it’s unclear where the narrator even is. Morrison does what every experimental writer probably hopes to do: create a story that is cohesively confusing, purposely difficult for a means to an end.

Are you plagued by writer’s block? Lately, I know I’m battling with poetry productivity. My advice? Pick up Glitter in the Blood by Mindy Nettifee, the poet’s guide on writing poetry, which contains multitudes of pro-tips (and prompts!). And while you’re at it, check out Rise of the Trust Fall, her most recent collection of poems. You’ll notice how informal her language is, which is unusual, and who knows — it might spark a whole train of thought you might never have come to otherwise.

Jonathan Franzen advises writers to avoid first-person P.O.V. That's nice — but I think he's wrong. You can write a good story in first-person, but your voice needs to be strong and must stand out. Pam Houston, who frequently writes about women in love, has to stand out to write these kinds of stories (since the industry is so heavily-saturated with rom-com-esque novels) — and she does. Her narration is so addictive, personable, and funny, that you forget you’re reading a book. You just feel like you’re talking to a friend.

I was first introduced to Roxane Gay’s work through The Rumpus, an online magazine I began reading in college for its witty contributions to pop culture and conversations on literature. If you’ve read any of Gay’s essays, like her collection Bad Feminist, you know she’s unapologetic. So many times I’ve had to start an op-ed over again because I found myself not being into it. Gay’s debut novel, An Untamed State , is riveting. And you know it’s good because Gay is interested in its themes of feminism, politics, sexuality, and violence. Reading Gay will help you figure out what makes you passionate enough to write meaningful work.

Mary Karr, a memoirist and poet, knows how to narrate her life in a gorgeous fashion. Writing about drugs, her right-wing town in which she grew up, and the slew of friends she had, Karr has a hard task not to slip into the land of cliché — but she avoids it. Karr’s poetic prose makes her memoirs, like Cherry and Lit, soar above becoming stereotypical I-did-a-lot-of-drugs-but-here-I-am narratives. When she’s high, you feel high. When she’s disgusted, you’re disgusted. When she’s overwhelmed, you’ll feel your palms start to sweat. Now that’s powerful.

8. Francine Prose for attention to your craft

To be a writer, you must be a reader. There’s no way around that, really. Whenever I hear students attest to their hatred of books but express their desire to become novelists, I cringe. In Reading Like a Writer: A Guide for People Who Love Books and for Those Who Want to Write Them, Prose advises her readers how to truly learn how to write (hint: it’s not by taking workshops). I loved this how-to because it kind of served as a relief to me. I’m not a huge fan of workshops, and I work best when I lock myself up in my apartment with a stack of books I’m hoping will inspire me (and they usually do!).

Robinson, who is known for her novels, Housekeeping, Gilead, and Home, writes beautiful, feminine, intense books. She’s also know for her lengthy sentences, like these: “For when does a berry break upon the tongue as sweetly as when one longs to taste it, and when is the taste refracted into so many hues and savors of ripeness and earth, and when do our senses know any thing so utterly as when we lack it?” Yeah. Pretty breathtaking. I knew I wanted that kind of complexity in my own writing, so reading Robinson was helpful for me. That kind of intricate detailing and parallel sentence structure is hard to pull off, but when you do, nothing will make you prouder.

Brynn Saito’s poems truly sing. Her book, The Palace of Contemplating Departure, is easy to fall in love with because the words and lines transition so fluidly. You can tell her poems (which work well on the page) translate on stage, too, which is important, especially if you're a poet who wants to perform live. In “Trembling on the Brink of a Mesquite Tree,” she writes, “and my car burned a scar across the back of an angel / and yes, I was afraid. No I’ve never gone hungry but I’ve woken alone.”

I don’t think I’ve met a single person who has read something by Atwood and not liked it. I think part of that universal appreciate for Atwood is her accessibility. Her work isn’t the most "highbrow," sure, but it’s dense in other important ways. Her accessibility and her often times sarcastic, frank, and unapologetic voice (even in her poetry and short stories) are what make her the successful writer she is.

12. Joan Didion for narration and the ability to transcend journalism

Didion’s essays aren’t just essays. They’re detailed snapshots that encapsulate crucial moments in American history. When you’re writing nonfiction or reporting, there is a small but important part of your writing that has to borrow from fiction. Describing a situation in a compelling way is one way to gain readership, no matter what you’re writing about. When I’m assigned topics like Internet usage studies, I know I can’t just pour statistics on to my Word document and let them speak for themselves. I have to weave this study into a story, because otherwise, no one will care. Didion is such a celebrated journalist, fiction-writer, and memoirist for her ability to tell engaging stories, no matter the topic.

13. Aimee Bender for creativity and symbolism

Aimee Bender has produced some bizarre stories. Her latest novel, The Particular Sadness of Lemon Cake, is about a girl who tastes the feelings of the person who prepares her meals (she quickly learns to incorporate more processed foods into her diet). That is imagination, and imagination is what you need as a writer, no matter what your genre is. Above all, that term we learned in our freshman year of high school — symbolism — is also necessary for most texts. It gives your work deeper meaning, and it allows for readers to be able to extract something other than its surface.

Plath’s poetry is well-known for its nursery rhymes juxtaposed with dark material. Poems like “Daddy” achieve that creepy brilliance through rhythm, rhyme, and repetition. I know those terms may remind you of your Poetry 101 course, but they can be useful if you do use rhyme, and if you want your poem to have a very calculated flow.

15. Jhumpa Lahiri for narration and imagery

Jumpa Lahiri is one of our queens of the short story (as well as the novel —this lady's talent knows no bounds). From Interpreter of Maladies to Unaccustomed Earth to The Lowland , Lahiri's storytelling is always flawlessly melodic, rich, and filled with subtle wisdom beyond her years. Her accessibility also stands out. Since she writes about incredibly heartfelt familial pieces, her imagery is never esoteric. It's easy to grasp and relate to; her metaphors and similes are ones we don't have to really work for. To be able to write so bluntly, yet intricately and beautifully, takes masterful skill.

16. Alice Sebold for narration and structure

The concept behind The Lovely Bones was so cool (and tragic) because of the way Sebold presented it. Did you ever think you could write from the perspective of a dead person who is privy to all characters? Being able to narrate a murder mystery from the point-of-view of the girl who died is brilliant! You already know what happened; you know all the terrible, terrible details. Now you just want justice! But not so fast, because said narrator is dead and she can’t help solve the crime. This kind of narration and structure is tricky, since the story in itself poses as a puzzle to you, the writer. Writers like Sebold who bend rules are the writers we look up to.

More like this
Prince Harry Incorrectly Recites Christina Aguilera’s “Genie In A Bottle” Lyrics
By Jake Viswanath
We’ve Entered The Hot Boy Reader Era
By Samantha Leach
Netflix Shut Down 'Bridgerton' S3 Rumours About A “Very Dark” Storyline
By Bustle
Jessica Simpson On The Time She Was Pursued By A Backstreet Boy & An *NSYNC Member
By The Editors
Get Even More From Bustle — Sign Up For The Newsletter
From hair trends to relationship advice, our daily newsletter has everything you need to sound like a person who’s on TikTok, even if you aren’t.