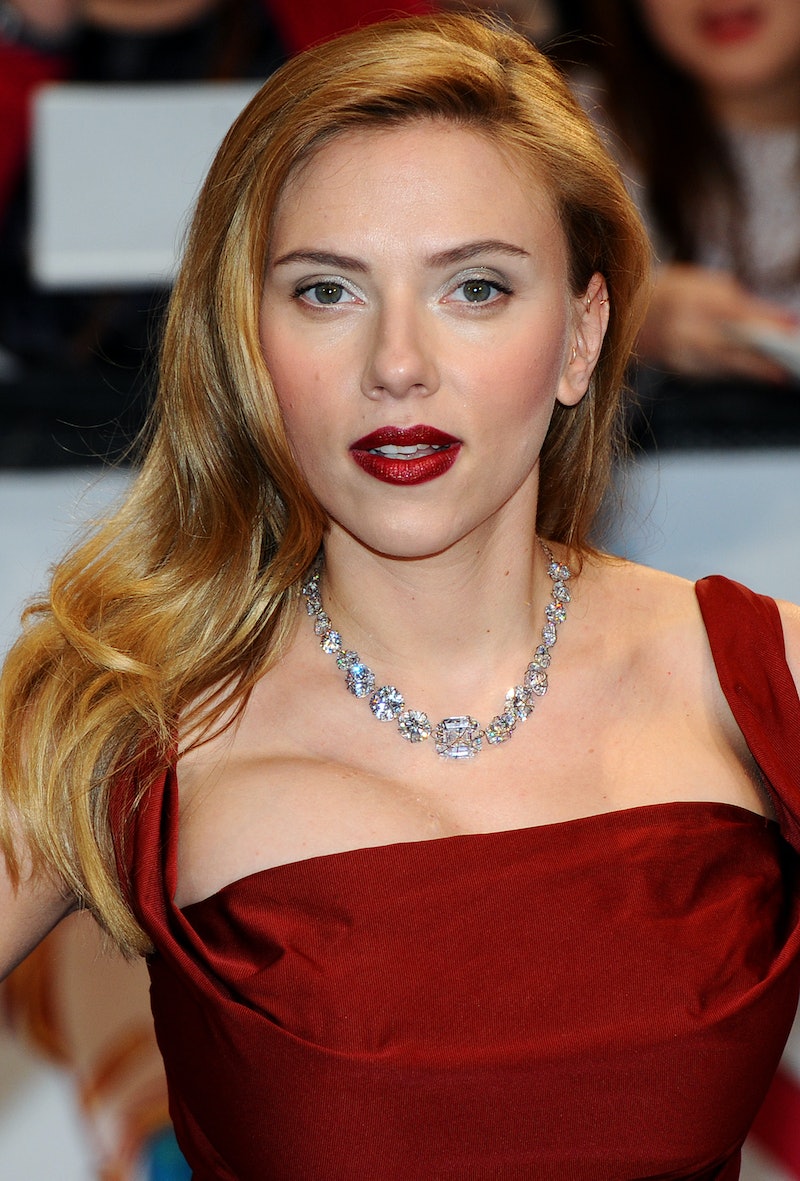 Scarlett Johansson is poised to take the top spot this weekend with her mind-bending sci-fi action flick Lucy , not only besting the male-drive Hercules, but giving a little life to this summer's dreary box office. Of course, ScarJo — er, sorry, Scarlett Johansson — has been giving Hollywood a run for its money twenty years now.

The 29-year-old star has been professionally acting for two decades and while her personal life has certainly grabbed headlines (and the occasional controversy), she's also become one of today's most celebrated A-listers. From her star-making, award-winning turn in Lost in Translation to kicking ass as the Black Widow in The Avengers, she's starred in indies, dramas, rom-coms, blockbuster superhero action flicks, and everything in between, including her recent Broadway debut in the revival of Cat on a Hot Tin Roof.

Johansson is regarded as one of the most beautiful women in the business, but she's much more than just a pretty face: she's also turned out some truly exceptional performances in her career. (While she hasn't done much TV work aside from a Saturday Night Live appearance and voice work on Robot Chicken, she recently told Vulture she likes "the idea" of television.)

In honor of Lucy — which is the second film she's carried this year, in addition to the trippy, brilliant, sci-fi drama Under the Skin — we're looking back at the evolution of Johansson's career on the big screen.

Johansson began acting in 1994 at the wee age of 9-years-old when she starred as little Lauren in the critically panned comedy North. From there on she had bit parts in movies like If Lucy Fell, Home Alone 3, and The Horse Whisperer. While those weren't exactly movies that made Johansson a major child star, her growing resume and talent was enough to land the part of Rebecca in the big screen adaptation of the beloved comic book Ghost World. The cult classic film showcased Johansson's dry sense of humor and perfect line delivery. It was the first real preview of what was to come with Johansson.

If Ghost World nudged the door open for Johansson, then her work in Sofia Coppola's 2003 moody drama Lost in Translation kicked it right in. As a lonely young wife who befriends an aging star (Bill Murray) during a trip to Tokyo, Johansson perfectly encapsulated the sadness one can feel in an unfamiliar land and the thrill of finding love in unexpected places. The performance earned the actress a Golden Globe nomination and, among her many raves and accolades, a BAFTA Film Award. Johansson was firmly established as a breakout star and went on to take on a variety roles. Johansson tried her hand at romantic comedies (2007's The Nanny Diaries and 2009's He's Just Not That Into You), Woody Allen pictures (2005's Match Point, 2006's Scoop, 2008's Vicky Cristina Barcelona), period pieces (2003's Girl With a Pearl Earring, 2008's The Other Boleyn Girl), and mysteries (2006's The Prestige and The Black Dahlia), among other efforts. While none of the films that followed Lost in Translation earned Johansson the same critical response or much box office traction, her star never fell in Hollywood.

2010 - Current: The Johannaissance and Beyond

The past four years of Johansson's career have been the most lucrative of her career to date, thanks to her role as Natasha Romanoff/Black Widow in 2010's Iron Man 2, 2012's Marvel's The Avengers, and 2014's Captain America: The Winter Soldier. Combined, the three films have made over $2.8 billion worldwide. That total will no doubt climb when she revives her role for 2015's Avengers: Age of Ultron and her own headlining superhero film Black Widow. But perhaps even more notable than Johannson's transformation into a box office champion is her on-screen overhaul. In 2013 the actress earned raves for her comically over-the-top performance in Don Jon and there was Oscar talk for her stunning voice work as OS Samantha in the digital romance Her .

She followed up her one-two punch of 2013 with an equally impressive 2014. In addition to the critically beloved comedy Chef, Johansson wowed in the dark, weird drama Under the Skin and is now poised to be on par with an Angelina Jolie-esque action hero in Lucy. Johansson has had a steady career in the twelve years since Lost in Translation, but it's been the past few years that she has truly hit her stride. With upcoming anticipated films like The Jungle Book and Hail Caesar!, Scarlett Johansson will only continue to solidify her place on the A-list.