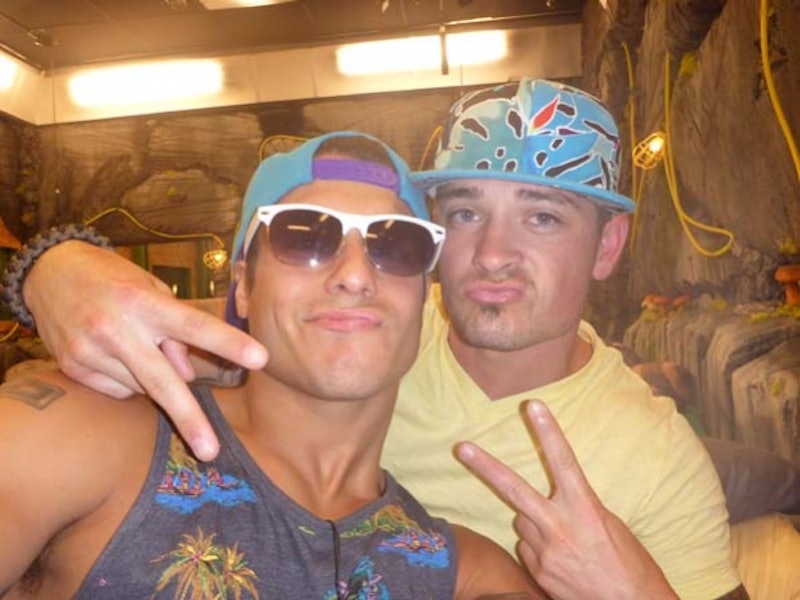 At this point it's starting to sound like a broken record, isn't it? Big Brother 16 houseguest Caleb does something profoundly unnerving regarding his creepy crush on Amber, and even when his fellow houseguests know he's a threat worth getting out of the house, they still keep him around. That's exactly what happened during Wednesday night's episode of Big Brother, and it's pretty disappointing that this week's HoH Cody didn't do anything about it. (If you weren't getting those penalty kicks to the butt already, I'd do it for you.)

Caleb spent the first part of the episode watching Amber and Cody on surveillance cameras and then watching them up close while twisting a fake knife. No, nothing unsettling there. "Home skillet's got his hands on Amber again," he seethed. Well, Amber didn't say no to him, unlike the countless times she said it to you. She has free will and is not indebted to you. (Look, I know Caleb isn't reading this, but my hope is that by just putting it out in the universe he'll catch on.)

It only got worse when Caleb cried that Cody "should have the dignity" to leave Amber alone and that Amber has been nothing but ungrateful towards him. Yes, she should definitely have to thank him for all the times he wouldn't take no for an answer, or made her uncomfortable, or watched her sleep, or threatened any other men around her, or put blankets on her (not at her request), or put himself on the block (not at her request). Congratulations Caleb, you're officially worse than Devin.

Now, Caleb is a giant red flag for so many reasons, but the fact that he told Zach that Cody's "relationship" with Amber put a target on his back should have told the rest of his alliance everything they need to know. Even worse, when Caleb had the chance to claim the Power of Veto during this week's soccer-themed competition...he instead took $5,000 and traded it with Zach for a trip to Germany. And of course, he wants to bring Amber there to propose to her, a woman he isn't even dating. Team player? Hardly. In fact, in the words of Zach, he's not much more than a "lovestruck dingus fooligan."

But still, Frankie (who lost his HoH power this week but still acted as though he hadn't) and Derrick insisted that Donny be put up as a pawn and leave Caleb alone. I understand that they want Brittany out, but do they honestly believe she's a bigger mental and physical threat than Caleb? Pffffffffft, I say.

For a brief, glorious moment Cody had the realization that not only does Donny not deserve to be on the block, but he'd make an infinitely better ally than Caleb. Blame it on his butt kick-related mania or that the Detonators got in his ear and controlled his game, but Cody let Caleb get away with his bullying, his stalking, and his general awfulness another week. All together now: blergh.