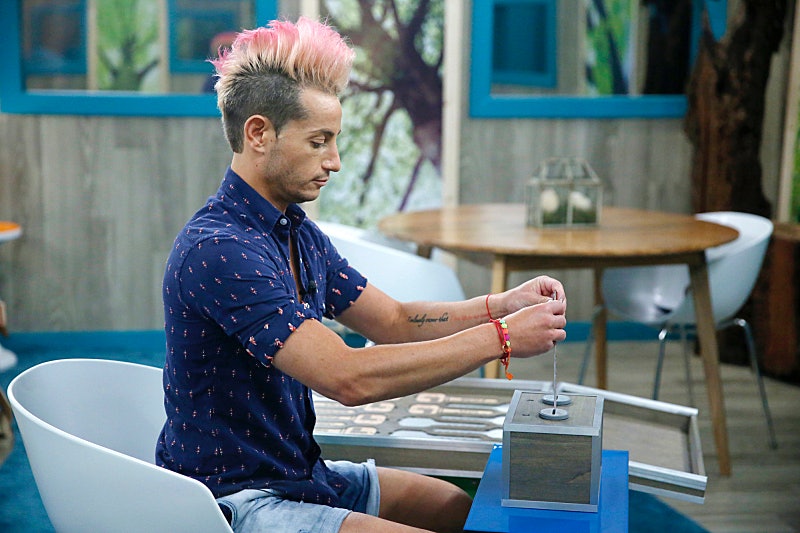 As much as reality shows like Big Brother strive to sequester its contestants from the outside world, sometimes actual reality sets in. On Wednesday, the producers gave houseguest Frankie Grande a letter from his family letting him know that his grandfather had passed away the day before. In the letter, his family urged him to stay, and Frankie then vowed to play in honor of his grandfather.

Although this segment has yet to air, live feed subscribers and fans of Frankie's uber-famous sister Ariana Grande were privy to the tragic news. Houseguests from past seasons are weighing in on the producer's decision to break the house's fourth wall, so to speak. Big Brother 13 winner Rachel Reilly (aka one half of "Brenchel") and Spencer Clawson (aka Big Brother 15 's resident racist) have shared their opposing views with TMZ.

"I would want to know. This is a really big deal, I mean, can you imagine finding out in September? That would be heartbreaking."

"The letter provided some strength from the outside world, which I think is unfair...I believe that Big Brother should exist in a vacuum and that nothing should be let in."

Personally, I think real world death trumps fake world competition. Every situation is different and, with a death, every houseguest should have the right to decide whether he or she needs to leave the house to be with his or her family.

It may be worth it for the producers to strike individual agreements with the contestants prior to entering the house wherein he or she lays out exactly what potential news they would need to hear while in the game.