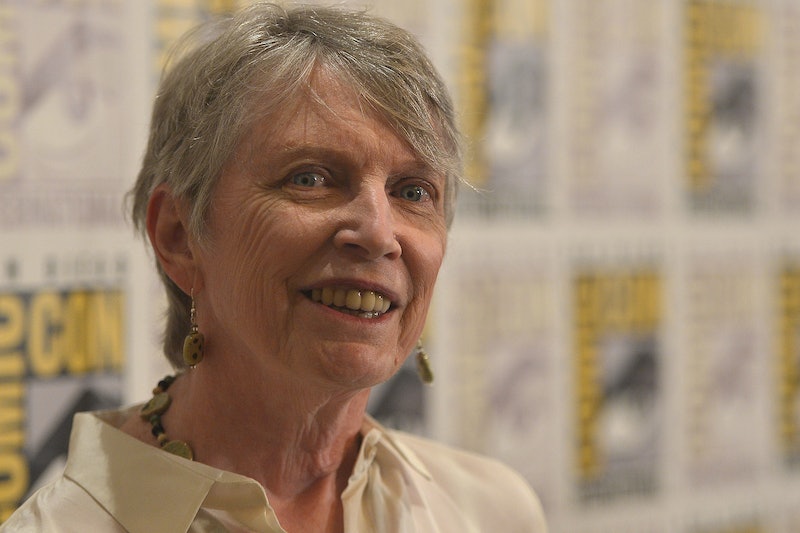 Most authors are lucky if they get to reach a single generation of readers; few have the privilege of reaching everyone that's passed through the American school system since 1979. Starting with the publication of the first book in her beloved Anastasia Krupnik series, Lois Lowry has cultivated a unique place in writing: an author whose books grow with their readers, and perhaps none more so than 1993's The Giver. Typically first read in seventh grade, then revisited again and again over the years, each time with new understanding, The Giver , about a dystopian world living in "Sameness," has become a classic for all ages. This month, the movie version of the author's most beloved book is going to be released — and it's about damn time.

"There were times along the past 18 years where I wondered whether it would actually happen," Lowry tells me, referring to the nearly two decades it took to get The Giver on-screen. "Every now and then it would jump forward and suddenly, someone would fly me out to L.A. for meetings with people, and then it would die down again. So I kind of got used to the uncertainty of it."

But then, "a little over a year ago, it quite suddenly became clear that everything had fallen into the right slots at the right time," she says. No more finding a director but losing the stars, or securing enough money but losing the producers; finally, after all those years, The Giver was going to get made into a movie.

Yet even then, the road to release wasn't easy. The film's original intended star, Lloyd Bridges, passed away in 1998, leaving his son, Jeff, to take on the job; big-name but little-experienced celebrities like Taylor Swift were cast in key roles; Lowry had to get accustomed to the idea of standing by as her most famous novel got adapted for screen.

"Anytime you publish a book, you let go of it, it goes out there to the audience," she says. "But I’m accustomed to having a say in everything myself. With a book, I design the sets, I do the dialogue, I cast, all of that, so this took some getting used to."

To her delight, though, the studio allowed her to be involved, and she "was never in the dark about what was going on," she says. And although she happily discovered that most of her book had made it into the film, she did have one major suggestion for the filmmakers: no love story.

"I just didn’t want it to be a superficial teenage romance," she says.

Thankfully, she reports, it isn't; while the movie does have some romantic elements due to the characters' older age, "it’s not overdone."

She adds, "because of the plot — which has been maintained from the book — the boy is gonna leave at the end and he’s gonna leave the girl behind, so it makes sense that he would kiss her goodbye. So it’s not a gratuitous kiss. I think I’m satisfied with the way they handled that."

Lowry's also pleased with the way the film handled another major change from her novel, the expansion of the character of the Chief Elder, played in the film by Meryl Streep.

"In the book, the Chief Elder is there to serve a particular plot purpose, but she has no personality," says Lowry. But "in the movie, she’s a multilayered, complex character, and of course, Meryl Streep can pull that off with genius. And it makes for a more complex set of circumstances; the relationship between her and the character played by Jeff Bridges is a relationship that doesn’t exist in the book, and it’s beautifully done... I almost wish I could go back and rewrite the book and add that element in because it adds so much, and it really, really deepens the whole themes of the movie."

Lowry does regret one element of her book not making it into the film, however — the scene in which Jonas bathes the elderly woman in the House of the Old.

"I would love that scene, as it's very tender," she says. "[Taking it out] makes the movie work better, and it makes things more succinct to have made that change, but that’s a scene I’m sorry to have lost."

The author also wishes that the format of the adaptation was different; although she's happy with the way it's turned out, her original desire was for The Giver to be made into a TV series, not a film.

"I would’ve loved to have seen the four books [The Giver and its three sequels] together become a TV series like Homeland," she says. "I could’ve done it myself. I could’ve written it myself and woven all those stories in together. That would’ve been great fun for me."

Still, whatever the form, Lowry's just glad that, after all those years, it's finally happening — and the fact that Jeff Bridges, The Giver's star and producer, cares nearly as deeply about the source material as she does is certainly an added bonus.

"Sometimes, passion is superficial," Lowry says. "But his runs very deep, and it was consistent over those many, many years."

"I admire Jeff," she adds. "He’s a good human being. I was pleased with his passion for the book."

It's a comfort for the author to know that Bridges has been involved in some aspect of the movie's production for far longer than the current dystopia trend has been around; "jumping on the bandwagon" doesn't apply when a book is the reason the trend exists in the first place.

"It’s said that The Giver is the first young adult dystopian novel," Lowry says. "Certainly there were other dystopian novels...but they were published for adults. So it’s not a new genre, but it’s new to the young adult audience, which is a large audience in these recent years, I think, because the kids today have so much to be concerned about as far as the future."

Yet if Lowry were to write The Giver today, she wouldn't.

"Given what’s out there now, I would avoid dystopian," she says. "I think its trend is ending, and there are too many of them already... So no, I wouldn’t take up this story if I were to sit down today and do it. But for me, it was fresh and new in 1993 when I wrote it and different from anything I’d done before, so it was great fun and a challenge to write it back then. It wouldn’t be now."

Writing YA, though, is a constant.

"[Adolescence] is an age at which there are so many possibilities to write about," Lowry explains. "It’s such an age of transition, entering the role of adulthood, making decisions."

While Lowry doesn't read YA herself ("Being an adult, I read adult books," she says), she's close friends with several of its biggest names: Katherine Patterson, Phyllis Reynolds Naylor, Jerry Spinelli, authors who, like her, are credited for starting the genre as we know it today. And she's looking forward to republishing her Anastasia series, updated for new audiences; working on her new book, a realistic work about an 11-year-old; and, potentially, seeing the three sequels to The Giver make their way on-screen, as well.

"If they were to do a sequel, I don’t know what form it would take, whether they would want to bring in one of the other books or combine a couple of them to form a sequel," she says. "I just don’t know. I would be averse to them just creating a sequel with an entire new story. I think I would say no to that, and I think I probably legally could keep that from happening, although I hope it wouldn't come to that."

With financial expectations for The Giver so high, sequels seem all but inevitable. Yet as Lowry knows all too well, nothing's ever as simple as that. And if the decades-long process it took just to get the first book on-screen has taught her anything, it's to not let studios' back-and-forth distract from her priorities.

"Throughout those 18 years, I was busy doing what I do," she says. "Writing books."