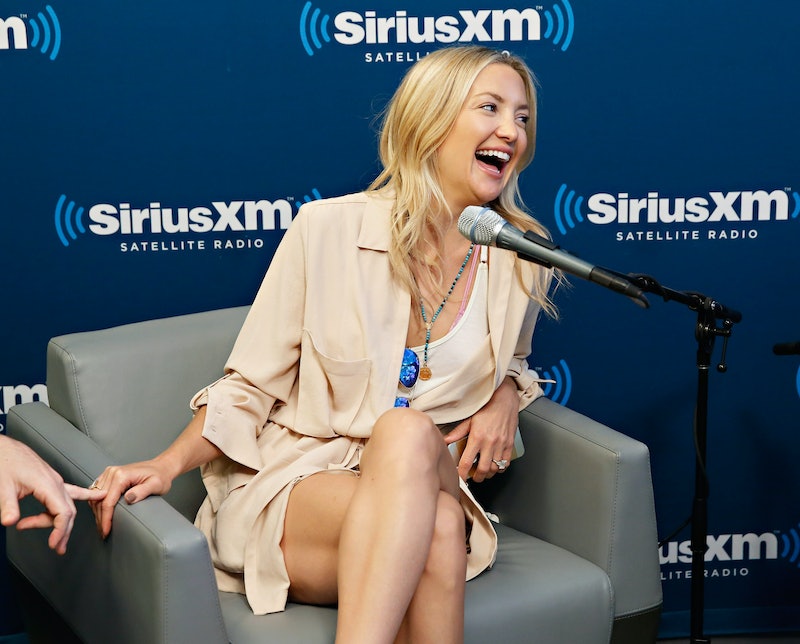 Being a celeb in 2014 means much, much more than starring in a film, releasing an album, or going on tour. It's about having 16 perfumes (AKA way too many) fragrances, a makeup line, an acne medication endorsement, Coke commercials, and a capsule collection with an apparel brand or clothing retailer at mass market. It supports the notion that the public will follow celebs and their offshoot branding endeavors, purchasing items that further connect the consumer with the person who is idolized.

It's classic "I can be more like her!" idol worship. Everyone from Zooey Deschanel (Tommy Hilfiger) to the Kardashians (Sears!!!) have clothing ranges or lines in some form or degree, be it from an actual, hands-on collabo or a simple partnership where the name is stamped on the label and used in the advertising.

That said, I definitely check out the items that Madonna and daughter Lola create for their Material Girl line, now repped by Zendaya, at Macy's and almost always find a single, standalone, and basic item that I can pair with tons of other stuff I already own. I don't want to buy the whole collection or look like a mini Madge by any means, but I own a black maxi skirt and a pair of black ankle booties from previous seasons that I lurve and wear… like, a lot.

With rumblings that Kate Bosworth might partner with a brand for her own clothing line surfacing due to her new fashion app, it got me thinking which celebs should do a clothing line and with whom. Since so many A-listers are already doing it, the pool of non-clothing-brand-having celebs is pretty small. These 11 should totally take a stab at clothing lines.

The teen singer can capitalize on the current '90s nostalgia trend, since she tends to rock looks that are from the decade — namely those chunky shoes she favors. Maybe she could do something edgy for Wet Seal, which was quite a popular chain in the decade. Resurrect Contempo Casuals, perhaps? That seems out of her wheelhouse. Still, her style is so unique and quirky but it could be recreated at the mass level. Figuring out the right, well, fit, in terms of a partner, would be key.

K. Hud has been the spokesmodel for Ann Taylor, which is pretty tame office chic, and she is behind a range of workout wear for Fabletics. But Hudson's boho style and her insanely sexy ensembles would be amazing if translated for a range with Anthropologie.

Duh, right? The well-browed model, who often shows off the most subtle sideboob, could go so many places other than H&M and Topshop, the latter of which she regularly shoots for, with a collection of clothes. Her grungy, rocker, off-runway style could totally translate at Forever 21, too.

The Modern Family cutie with the best doe/anime eyes is super awesome on the show, and her style could translate to mall retail, like Delia's. She does layers so well when in character on the show and in real life. She also dresses up basics with a key, statement piece, so she could totally get behind a basics set for her fans.

I've already established how much I love Lovato's chameleon-like, fun style and her deftness with black, studs, and leather, courtesy of her stylist. It's high time she teams up with a designer and/or a retailer to create a cool, edgy, and branded line. We're not talking Kmart, either — All Saints, Betsey Johnson, and Topshop would be viable options for a Lovato range.

How this has not happened yet is not as surprising as you'd think. Gaga has said that she wants to take her time before doing any sort of capsule or limited edition collection. Her baby sis Natali is a budding designer, so why not have the Sisters Germanotta team up for a range — maybe a collection of t-shirts? Gaga has been rocking heavy metal tees lately, so she could use the shirts as inspiration for wearable pieces, as opposed to outrageous (and fleeting) couture made of bubbles or dresses that fly.

The actress is always playing around with her style and she's as comfortable in prim and proper Chanel as she is in a leather shift with strappy heels and a denim jacket. Stone could do a line with a designer at mass or even in the prestige market. She has a style that would work in either world. I'm thinking Urban Outfitters, but further fancified.

The pop singer's accessories collection for Claire's has some hits and some misses, but it is cheaply made since it's mass market and it's essentially trinkets. That said, the best pieces are really cute and Perry's aesthetic could easily be translated to apparel. She could knock fellow Cali brunettes Kendall and Kylie Jenner from their PacSun perch and do a line for the teen-centric brand. Perry ditched the candy costumes when she released "ROAR," so she could do normal and wearable now.

I know. This is a from-outta-nowhere choice. The British girl group, which sounds like Destiny's-Child-meets-En-Vogue, mixes inspo from anime, Avril Lavigne, and the Spice Girls with each member's complementary style. Little Mix still do the big, '90s platform boots as well as they do color and belly-baring but they have yet to break into the American market, so a small capsule with a British retailer for the U.S. could help, like ASOS.

Grande's girly and femme style, consisting of baggy sweaters and really short skirts, paired with thigh-high Rockette boots or platform pumps, and Chanel bags, seamlessly meshes sexy and sweet. She could easily team up with a higher end retailer to do a collection of tweed, Catholic school girl uniform skirts and angora sweaters.

The actress and mom-of-two is such a stylish flower child. I could totally see her creating loose, short, maxi, and flowy dresses for Kohl's.