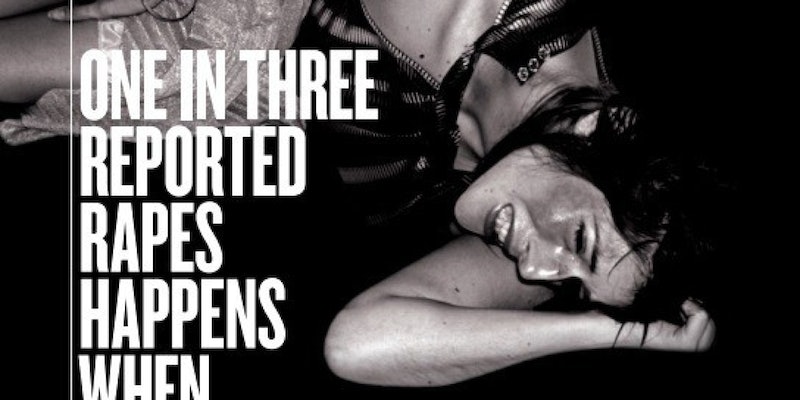 Trying to educate people about the dangers of alcohol overuse is a noble goal. But implying that a woman is asking for rape when she drinks too much? Not so noble. When National Health Service England released a set of "Know Your Limits" posters sending that message between 2005 and 2007, plenty of Brits (and feminists worldwide) were upset, especially since the campaign is still present in plenty of doctors' offices throughout the U.K. Although NHS England refused to apologize or remove the posters, one pissed-off blogger recently decided to alter the text of the offensive image — and her version sends a much better and more honest message.

Agitation over the campaign's implications came to a head a few weeks ago, when Cambridge University student Jack May began a Change.org petition to have the offending posters removed from NHS locations. According to May, the poster's real message is that women who drink are then responsible for any rape or sexual assault they may experience. I quite agree: Although the poster is likely intended to protect women, it goes about that in entirely the wrong way by placing the blame on the victim rather than the perpetrator (the one who, you know, decides to commit a rape). Here's the original poster:

"Implicating victims in their own rape is completely unacceptable — rape is always the fault of the perpetrator, and no matter what/whether the victim has been drinking, what they are wearing, what the perpetrator thinks may have been implied, rape is never their fault," May told HuffPost UK.

What sends an even stronger message than the petition is a "redesign" of the poster by blogger Jessica Devonport. Angered by a government institution's willingness to spread the wrong idea about alcohol-related rapes in a culture already steeped in serious misinformation regarding violence against women (one only has to look at the case of rape survivor Jada or ESPN's Stephen A. Smith's statements about domestic violence for that to be obvious), Devonport responded with the following:

Devonport's clever and timely statement places the blame where it really belongs: at the feet of the rapist rather than the victim. "The central message [of the original] is that if a woman has been drinking, she is somewhat responsible for anything that might happen to her. Pretty f***ing offensive, right?" Devonport wrote on her blog. Responses across social media have been overwhelmingly positive, but due to some rape apologist-laced ones, Devonport wrote a post detailing the reasons why the original poster was harmful. Here are a few of them:

The rest of Devonport's defense is worth reading, so I recommend giving it a few minutes of your time. I, for one, hope that both her work and Jack May's petition will be enough to make NHS England recognize that putting the onus of the problem on the victim does not a good public health campaign make.