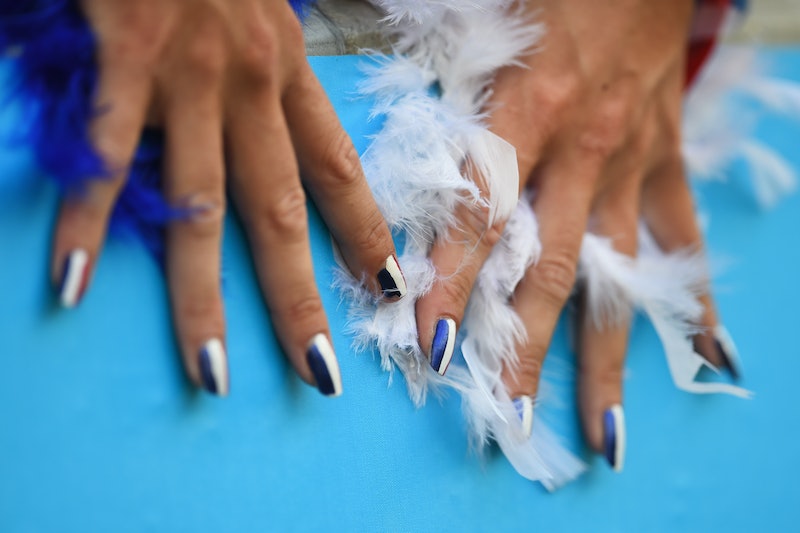 While some celebrities can't leave home polish-free, Miley Cyrus is doing a nail detox in order to give her tips a much needed break from constant acrylics and polish. I am a self-proclaimed manicure addict with a love for black nail polish no matter the season, but if I paint my own nails it looks like it was done by a five-year-old (read: no at home manicures for moi). Despite the controversy over the UV rays, I love a good gel manicure every once in a while. And who doesn't like getting their feet scrubbed and massaged during a spa pedicure?

In recent years, however, nail art has had its ups and downs. In polish's earliest iterations, manicures were considered bold and different if they included multicolored nails or were basically any color besides red or nude. But ever since the late 2000s, manicures have gotten a serious makeover. It started with the simple bling nail, and evolved into ten fingers of tiny little works of polish art. Now you've got caviar manicures, long acrylic nails with 3D appliqués... your nails can say as much about you as your wardrobe.

But, like all trends, nail art has its opponents. After years of red carpet mani cams and #ManicureMonday Instagrams, even the biggest polish fans are starting to take a break. Here's a rundown of previous nail art aficionados who are going bare recently, and which celebs will never give up their polish collections.

Natural nails are beautiful too! Plus you can always wear clear nail polish if you can't bare to have completely unpolished nails.

I don't think I've seen Kylie Jenner without a manicure since the first couple seasons of Keeping Up With The Kardashians. She's constantly debuting new manicures (complete with very long acrylic nails), so I don't think she'll be going the clear polish route any time soon.

Rings on non-manicured nails has never looked so good. In 2011 Sarah Jessica Parker was quoted saying, "I don't know how to put make-up on! I never do my nails and I almost never do my hair. And I've probably had nail polish on my nails twice in ten years.” Gotta love her honesty!

She seems to be all about the talon acrylics lately, simply changing up the polish color and designs every so often.

During the fall 2013 Marc Jacobs Runway Show, he sent all of his models down the runway sans colored nails. All of the models wore his "favorite nail color" — a clear, shiny lacquer. According to BuzzFeed, Marc Jacobs killed nail art with this move.

Shay Mitchell's new lifestyle website is equipped with plenty of adorable nail designs proving she's all for a good mani and doesn't seem to be nail detoxing just yet.

Believe it or not, it appears that Deschanel may also be on a nail detox. She used to be the queen of crazy red carpet manis, but her nails seem to be bare as of late.