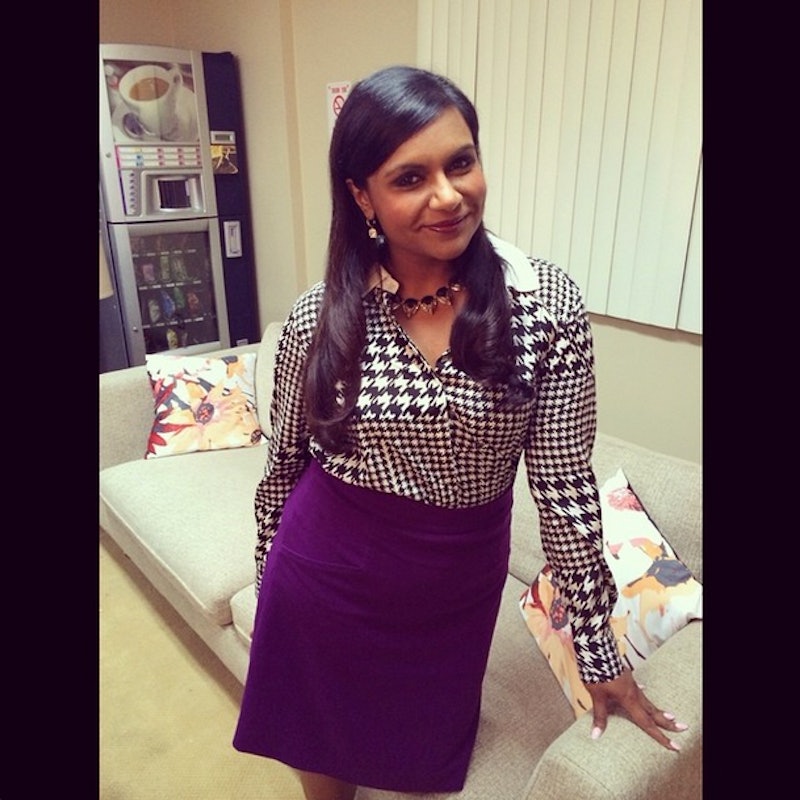 How are we all holding up? It's been a long, long time since that May evening when Mindy and Danny's Empire State Building Nora Ephron-inspired makeout fest took place. No, it wasn't a cliff hanger (thank god), but there's no denying the fact that the newly-established couple is something the entire fandom is just itching to see more of. Add that to the fact that Mindy and Danny are supposedly in for a Lucy/Ricky Ricardo-like story arc this season (and the fact that the first ep is called "We're A Couple Now, Bitches") and you've got some major anticipation brewing.

Well, we've made it to August relatively unscathed, with a little more than a month left until the show premieres on Sept. 16. It's going to be a tough five weeks, but luckily there are a few things to keep us occupied. Such as:

Last but not least, we have the ultimate balm to soothe our Mindy Project-deprived pain: some grainy images of some of Mindy's ever-adorable wardrobe:

Ooh! Looks like Mindy's style is as impeccable (and piñata-like) as ever: We've got her penchant for houndstooth running full-force in look six (let's number them clockwise, starting in the upper left corner), her unique ability to wear blinding shades of chartreuse making an appearance in look five, her talent for mixing prints (both on and off screen) showing up in look one, and her expert adorable sheath-wearing skills in look four.

Apparently, she wore all six of these looks in one day of filming! That's a lot, even considering the fact that she had over 20 outfit changes in the season two finale alone — but the more the merrier. Here's to hundreds — nay thousands! — of Mindy Lahiri outfits to come.