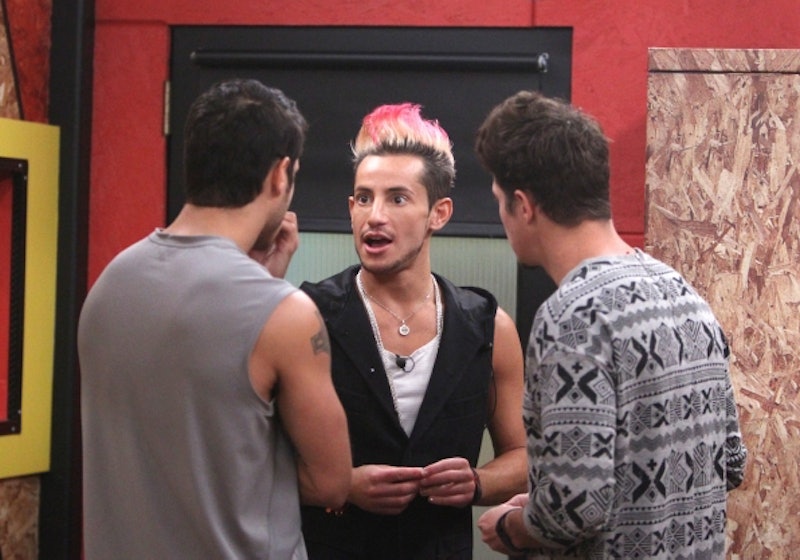 Big Brother 16's biggest secret is finally, finally out. Frankie Grande is Ariana Grande's brother. Say it loud and say it proud because all of the house guests know it now. Friday night, Frankie told the other guests that he's Ariana Grande's brother after he played in the Battle of the Block and that revelation has left the house guests shocked, angry, and, above all, reeling. It's the kind of information that has the potential to completely change the way the game is played and that will definitely change the way the other house guests treat Frankie. It was exactly that kind of thing that made Frankie keep it a secret in the first place, because he didn't want that kind of target on his back. So why now?

Well, Frankie was kind of backed into a corner. He realized that his social game had blown up in his face and that all of his allies kind of hated him now, especially Zach who considered Zankie (and Frankie) dead to him. Frankie needed to make a big move to win their trust back and he did it by revealing that not only is he Ariana Grande's brother but he's also playing the game in order to donate the $500,000 to charity instead of playing for selfish reasons. The thing is, did Frankie actually help his game in the long run or did he actually guarantee he won't make it to the finals?

Nicole Franzel, one of the HoHs for the week, immediately began to freak out because she realized that America had to hate her for putting a famous person up on the block and conspiring to get him evicted. It's an utterly bizarre thing to worry about, but it's proof that Frankie's status has made him a feared figure in the house.

However, the point of Big Brother is to win $500,000 and everyone in the house needs that kind of money a lot more than Frankie does if he's famous. Victoria rightfully pointed out that Frankie tried to win sympathy by saying he's playing for charity while she's just trying to make a living, but Ariana Grande could totally build that school in Africa for him, couldn't she?

Victoria and Caleb were immediately star struck by Frankie after his announcement. Victoria is a self-confessed Ariana Grande fan who begged Frankie for the opportunity to meet her while Caleb, in true Beastmode Cowboy style, immediately began wonder if he had any chance with Ariana Grande. To them, keeping Frankie around could help them thanks to his connections.

Ironically, it was Derrick who was the most offended by the fact that Frankie has been lying to them from the moment he stepped into the Big Brother house. That's right. Derrick the undercover cop who noted in his introduction video that he wasn't going to reveal that he is a cop to anyone in the house is the one deriding Frankie for his dishonesty. Ah, Big Brother.

Frankie has no more secrets left between himself and the rest of the house guests, so from now on they have no choice but to take him as he is. He even chose the best time to do so, because even if he gets eliminated then he gets to go to jury and, unbeknownst to him, could have the opportunity to return to the Big Brother house.

Bad News: He has an unfair advantage.

Let's be honest. Ariana Grande's campaigning really helped Frankie get voted onto the Team America alliance. The house guests also worried that Frankie was the reason there was no America's Favorite this season because he would win it by default. Essentially, Frankie's identity gives him an unfair advantage over everyone else in the game so it might be in their best interest to cut him loose.

Verdict: Frankie is in trouble.

Right now, it really looks like Frankie is in danger thanks to his revelation, but this is also Big Brother. Everything can change overnight and, for this week at least, Frankie is safe.