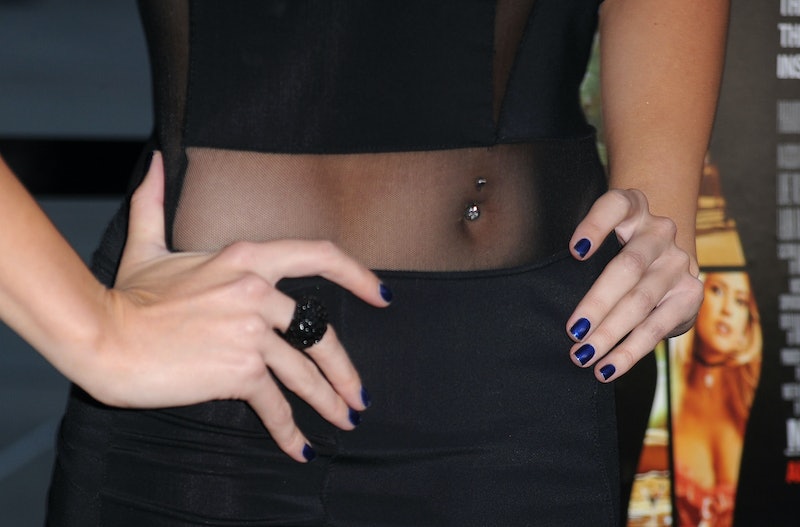 In the mid-'90s my dance teacher got her belly button pierced. I was crazy jealous. She just looked so cool with that little rhinestone stud on her toned, tanned stomach. I wanted one, bad. Luckily, I was only about six at the time and far too young to make that kind of mistake. My belly remained ring-free, and 23-year-old me is eternally grateful for that.

The belly button ring, like many trends from the '90s through the early '00's, is embarrassingly bad in retrospect. How did we, as a society, allow them to become a trend? Chalk it up to a moment of weakness for humanity, but belly button rings were everywhere for a time. By 1999 a belly button ring was practically a prerequisite for becoming a female pop star, right up there with "abs that look great in a ripped cropped top" and "chunky highlighted hair."

While I'm currently hoping for a technological breach of some sort that wipes the belly button ring from our collective memory, the '90s girl in me is still in awe of them. I mean, doesn't every stomach instantly become 17 points hotter when there's a rhinestone sticking out of the navel? I think it's time we give credit to the all-powerful belly button ring with a little quiz. Let's see how well you know your '90s pop stars from their belly piercings, shall we?

Why it's Queen Bey, of course!

Janet Jackson. So she's more of a legend than a '90s pop star, but she's got the belly button ring to let us know which decade she really belongs to.