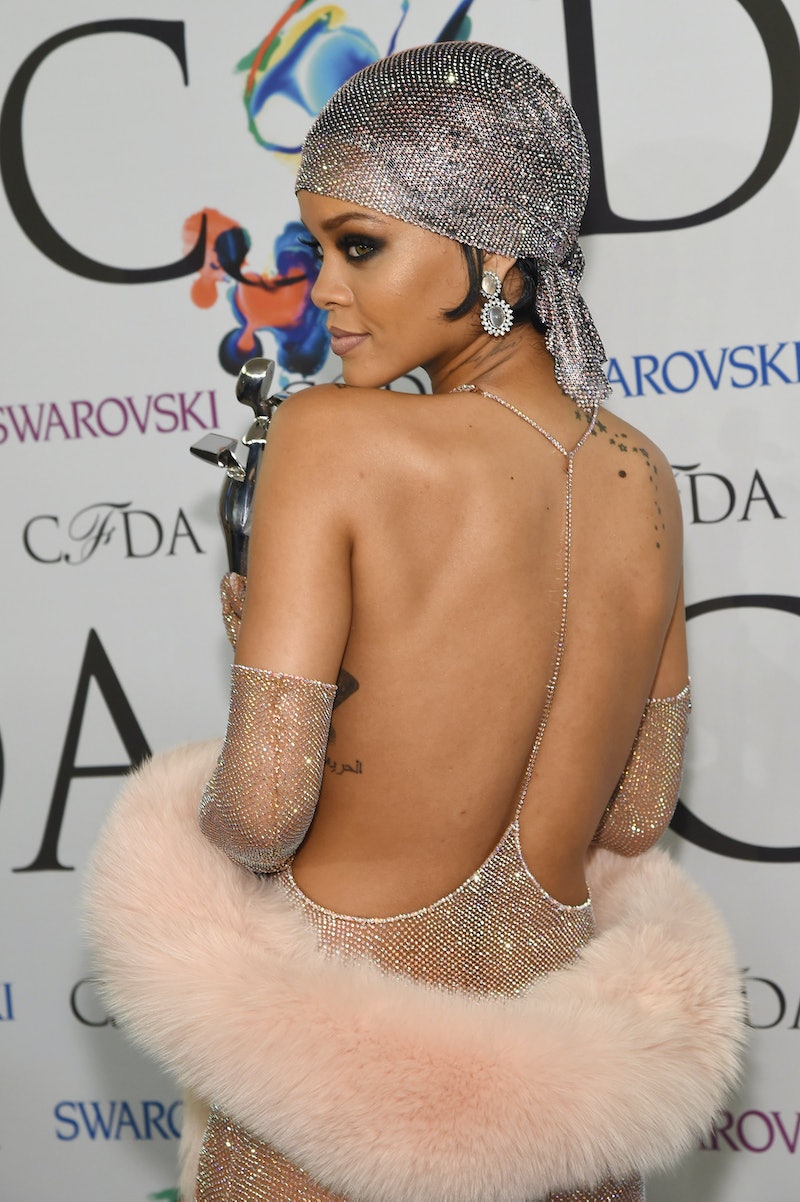 Rihanna, who I'd love to see branch out even more when it comes to her branding, even described as her cover feature as an "Eskimo Horror Story" in one of her tweets.

The cover is a close-up shot, focusing on Rihanna's stunner of a face instead of her body draped in couture. RiRi has a septum piercing, a statement, collar-like necklace, and she gives off a vacant, hard-to-reach stare. It's impossibly hot and incredibly primal and dramatic, just like her approach to her hair, which she changes often.

The accompanying images from the spread, which she tweeted out, proving that she is ever the consummate promoter, find her surrounded by wolves, quite literally. Overall, there is a mix of earthy, icy, natural, and sexy. She's hitting the elements!

As always, the images ooze sex and are hard to look away from. It's the eyes, which are amplified by the red shadow, which, in and of itself, is a hard look to pull off. But this is Rihanna we're talking about. She can do anything when it comes to style and it's a win.

It's almost uncomfortable, isn't it? The way that Rihanna is staring right at you with those bedroom eyes.

This isn't the only time Rihanna has been exceptionally daring when appearing on a major mag cover. In fact, daring to bare and going to extremes with her makeup and fashion is her thing — duh — and I'm not just speaking about this year's Liu cover, where she went full-frontal with her nipples, over which she subsequently ended her relationship with Instagram.

Forget snakes on a plane! There were snakes on Rihanna's head on the December 2013 cover of the British version of GQ. Her serpentine, slithery Medusa look was unforgettable, and not just because of the snakes. Her eyes and strategically placed arms, along with the visible underboob tattoo, were pretty mysterious — and hawt, too.

Rihanna was dewy and nude on a 2011 cover of Esquire, with some errant leaves covering certain parts of her body. She was christened "The Sexiest Woman Alive," a fact with which I can't argue. She has mastered the art of posing without showing too much; in fact, her arms, shoulders, and legs are probably sore after a photo shoot since she has to work her muscles to make sure she covers up her lady parts. Overall, though, it's about what you don't see, as well as her piercing stare, that make RiRi's skin-flashing covers so sexy.

While her red hot, Ronald McDonald-colored curls on this April 2011 Rolling Stone cover were wild, crazy, and gorgeous, I'm still questioning whether or not those Daisy Dukes can even be classified as shorts. It's more like a swatch of denim. Baby doesn't just strike back; she's got it! Ri doesn't just drip sexiness; she also oozes confidence from each and every pore.

RiRi covered the December 2012 "Men of the Year" issue of GQ in her birthday suit. Well, her birthday suit and a cropped leather jacket over her shoulders. Don't you love how her tattoo looks like an accessory or even a lingerie design of sorts? Scorching!