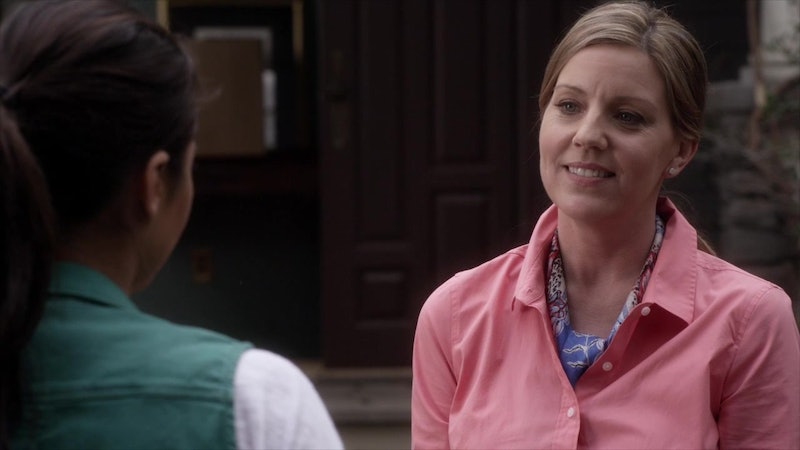 Jessica DiLaurentis has invited Emily, hotel-bound since her house lost a fight with a car, to stay with her. Em's reluctant to accept, but the Liars can't pass up such a perfect opportunity to snoop—especially considering Mommie Dearest has meticulously preserved Ali's bedroom as a shrine to her dead daughter.

But Emily's hardly been there for fifteen minutes when Mrs. DiLaurentis brutally stabs her to death—I mean, proves to be an exceptionally kind and gentle person? She opens up to Em: Her husband has filed for divorce. "I'm going through that myself," Emily says, because the dissolution of a twenty-plus-year marriage is exactly the same thing as a rocky patch in a high school relationship.

We also learn that Jessica excels at knitting, and is fully supportive of Emily's decision to come out. A+ personality, lady.

Mr. Fitz is locked out of his classroom, reflecting his frustration over the impending custody battle for Malcolm, because metaphors (lock = vagina? key = phallus? doors = human babies?!). But the plot thickens when a DNA test proves that he is—to paraphrase any number of daytime talk show hosts—not the father.

Aria's in Philadelphia to attend one of new boyfriend Jake's karate competitions. Afterwards, they eat spicy vegetarian burritos and make out on a stoop. Millennials in love! While in Philly, she learns from CeCe's disgruntled former roommate that Drake moved to L.A. after Alison got her expelled from UPenn.

At Radley, PLL season MVP (yup, casting my vote now) Mona still insists that she murdered Detective Wilden. In a session with Wren, she reluctantly offers a Rorschach-style interpretation of an idyllic drawing of a family of farmers: "This looks like Norman Rockwell sketched it with his teeth." But Mrs. Hastings isn't amused. Warned about Mona's intentions by Wren, she confronts the pint-sized sociopath in person: "I have ways to see to it that you rot in a cell until your hair turns gray." If being an attorney means you can put whoever you want in prison indefinitely, excuse me while I apply to law school yesterday.

Toby receives an envelope from A containing crumpled sheet music—a song that, surprise, his late mother used to play. He and Spencer drive back up to visit her therapist, the retired (and slightly senile) Dr. Palmer. When Spencer plays the tune on the piano, Dr. Palmer believes that she's Mrs. Cavanaugh. He unexpectedly drops Mrs. DiLaurentis's name.

Jessica admits to Hanna and Spencer that she's met the doctor, but only once. When Alison was still alive, CeCe checked into Radley as Ali, threatening suicide. Mrs. DiLaurentis attests to the unsettlingly Single White Female-y nature of the girls' friendship.

An anonymous tip accuses Mrs. Hastings of bullying Mona into a confession. Though the allegation is entirely bullpoop, she must nevertheless recuse herself from Ashley Marin's defense to avoid tanking the case. But who turned her in? None other than her would-be son-in-law Wren.

Meanwhile, a makeshift secret dwelling, scattered with blankets and trash, is discovered in the DiLaurentis basement. Someone's been living there. Could it be CeCe? Allison? A family of large raccoons?

Conspiracy theory of the week: See that pink paddle brush on Ali's dresser? I own the same one. Have I been Red Coat this entire time?