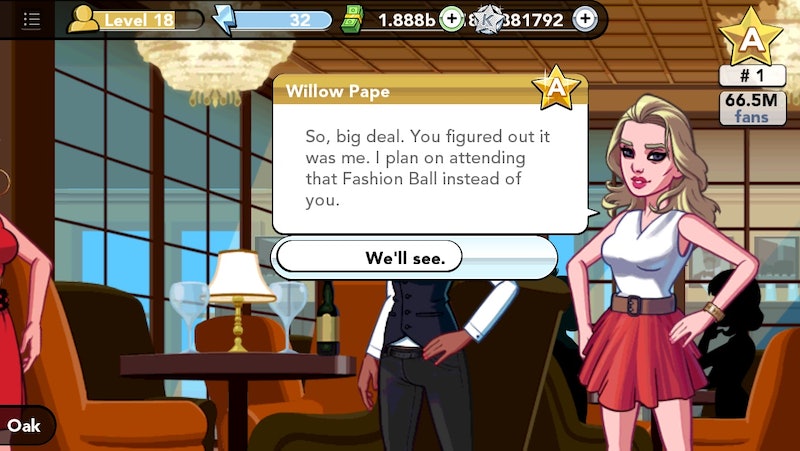 In the time it takes you to reach the A-list of Kim Kardashian: Hollywood, you meet a lot of interesting people. From your goofy dad joke-spewing manager Simon to all of the jerks you go on dates with, it's like a crash course in dealing with crazy people. Of course, one stands out above the rest: Willow Pape. Many have wondered if Willow Pape is based on a real person, like oh I don't know, Paris Hilton? It would make sense, she is a blonde also-famous person, and Kim and Paris famously feuded around the time Paris started to be overshadowed by her former assistant. But I have a different theory. One that lends a much deeper meaning to the game that so many are quick to dismiss as superficial. What if Willow Pape is Kim Kardashian?

I know what you're thinking, Kim is already in the game. That's true, she shows up once in a while to present you with a once-in-a-lifetime opportunity, offer words of encouragement, and be an overall great person. I think that Willow is the opposite of that, the anti-Kim. The Kim that Kim locks up deep inside and is afraid will someday burst out. Consider Willow's outfit, the one that almost never changes, no matter where you run into her.

Some people think it resembles the outfit below, that Paris was once spotted wearing.

I see the resemblance, bright skirt and white top tucked into a belt. But there's another outfit out there that is nothing short of identical to Willow's now iconic look.

Oh, I'm sorry, is that you Kim? I almost didn't recognize you in WILLOW'S EXACT OUTFIT. The white shirt with the same neckline, the light brown belt with darker buckle, the orange-pink skirt with pleats in the exact same places — it's impossible to deny, that is Willow's outfit. Need a better angle?

Tell me, why would Kim do this? Why would she dress the villain of her game in an outfit that she once wore? It's because Willow is an extension of Kim. For every good deed game-Kim does for you, Willow tries to destroy your career. She causes scenes, picks fights, bashes you on Twitter, badmouths you to the press — all things that the Kim we all know and love would never do to a fan.

But maybe part of Kim wishes she could do that. Not to a fan, necessarily, but to someone rising through the ranks of Hollywood, ready to steal the spotlight — the way you do in Kim Kardashian: Hollywood. Kim created Willow not just to knock you down and make sure that you never surpass her own level of fame, but to show you what Hollywood can do to you.

And apparently, at some point in the game, all of Willow's clothing items will become available to you. Mimicking her face and hair is easy. What does that mean?

Maybe that's what happens when you finally win the game. You don't get a reality show or luxe wedding, you start stalking C-listers at clubs, trying to provoke them into a career-derailing fight. Someday, we will all be Willow Pape, and that's when the world (of Kim Kardashian: Hollywood) will end.