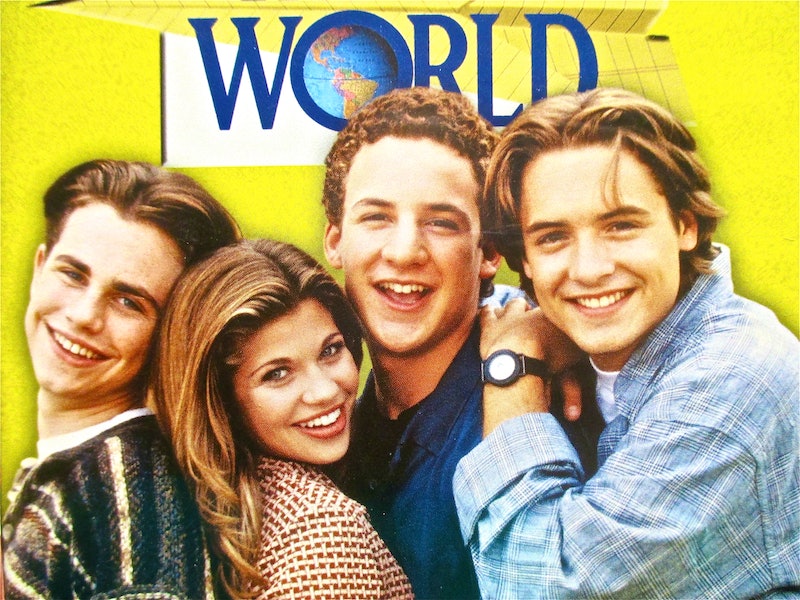 For many growing up in the '90s, Boy Meets World was the quintessential show for life lessons. BMW taught us about how to deal with bullies, how to treat others, and how to feel comfortable in our own skin. It even tackled some of the bigger issues like death, divorce, and substance abuse. But there was something else into which BMW gave great insight: style.

I, for one, was always tuned into what Topanga was wearing, and how she did her hair. As far as I'm concerned, she was the end-all of the crimped-hair movement. But she wasn't the only one with an enviable sense of style. The whole gang had their own thing going, and they (almost always) worked it. Of course, with any rise, there must come a fall. And while some of these hairstyles are less-than-stellar, I can't say they don't show character.

Although the spinoff, Girl Meets World, is not as brave with its fashion and beauty choices (New Disney... Sigh.), the latest episode did somewhat return to its, ahem, roots. So to celebrate Riley's first big experiment with style on GMW (in an attempt to be a Harajuku girl, no less), I bring you the good, the bad, and the overly-processed styles of the cast of Boy Meets World.

Yes, this snafu helped teach the classic "it's what's on the inside that counts" motif, but Cory sure had to learn the hard way.

9. The Couldn't Pick Just One

The boy with the 30-foot range let it get a little out-of-control by season three.

Only Jonathan Turner can pull this off. But oh boy, can he.

The best way to give your audience a before & after.

5. The Greatest Masterpiece of All Time

So what if his hair couldn't move? Those curls are too cute.

The hairstyle so flattering even guys can pull it off.

I debated including this one because I think BMW fans get it. Topanga had great hair. Next.

Topanga again? I know, I know... but her long hair was always on point.

1. The So Good It Causes Others to Question Everything They Thought They Knew About Life

If Shawn can't shut up about your hair, you know it's good.