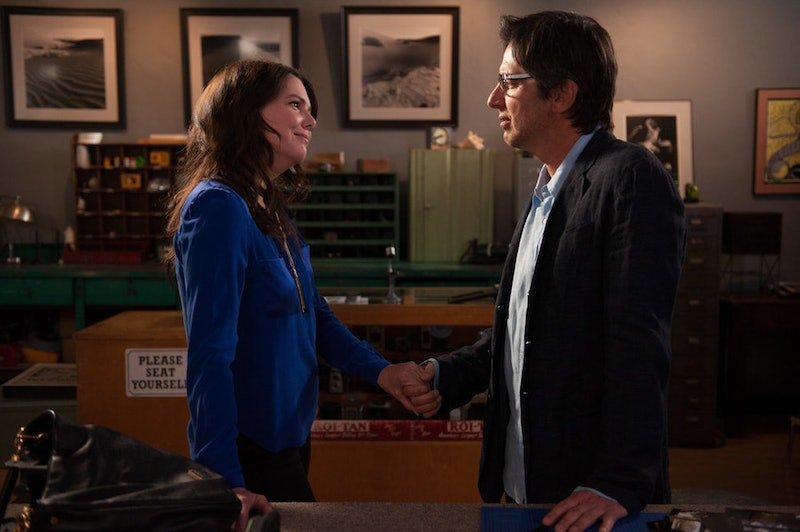 I have a lot of feelings when it comes to NBC's show that will definitely make you cry, Parenthood, but who the hell doesn't? And, of course, most of those feelings have to do with every one of the main cast's love lives. Every single one. Basically, I have some pretty strong opinions about who is right for who, especially when it comes to Sarah Braverman and Hank getting together. Throughout the first five seasons of the show, aka every season of the show, Sarah has desperately struggled to find someone who is a good match for her. And through all of those men and mishaps, I was never happy with any of them... until Hank (Ray Romano) showed up. That's right — I'm a Hank supporter.

Sure, Hank has some communication issues, blah, blah, blah. But he loves her. Like really, really loves her. And, most importantly, he's more than willing to work on his social skills (and eye contact) so as to prove to Lorelai, er, Sarah that they can make their relationship work. Based on all of that, you can pretty much assume that I was grinning from ear to ear and clapping giddily to myself when Sarah and Hank reunited in the Season 5 finale. However, if I've learned anything from Parenthood, it's that one moment everything can be fine and dandy, and the next second, you're sobbing uncontrollably. So what can we expect for Sarah and Hank in the final chapter of Parenthood? Happiness? Neverending tears? Check out a few of my educated guesses:

This is definitely option A for me. Sarah has struggled for so long to finally figure out who she is as a person, and now that she has a bomb-ass photography career and she's getting along with her kids, it only makes sense that she can finally settle down with Mr. Right.

Hank can't change enough, and Sarah breaks up with him for good

Obviously I hate this option, but it's definitely realistic. Their biggest issue as a couple has been lack of communication, which is something that Sarah has continuously said that she needs Hank to work on. Another issue is that Hank has an ex-wife and daughter to think about. He's left Sarah before to be with his daughter, so he could potentially do it again. Also — and this is a big also — TVLine reports that Betsy Brandt is coming back for Season 6 as Hank's ex-wife, which totally means that things could end poorly for him and Sarah.

Mark comes back and ruins everything

Ugh, Mark — just stay away. I know Jason Ritter's most recent appearance as Sarah's on-and-off-again ex was to finally end things with her by revealing that he's engaged, but I could definitely see him coming back. Plus, in an interview with Bustle, Ritter said that he would return "in a heartbeat." He revealed that he's always been a Mark and Sarah fan, and although he thinks that his last appearance was a way to end things, he wouldn't be surprised, considering it's happened before, if he was brought back. Fingers crossed that we've seen the last of Mark.

Yeah, that's right — Amber might totally be pregnant. Remember at the end of Season 5 when she was looking at pregnancy tests in the drug store? Yikes. If she does end up being pregnant, it would be helpful to have Hank around since he was so unbelievably kind and supportive during the whole Ryan ordeal. Even though Hank can't express it all of the time, he's really a big softie at heart.

One of them dies

Okay, so this is definitely my weakest theory, but it's not without evidence. According to TheWrap, creator Jason Katims revealed that there will be "a huge new challenge for the family," which many fans believe means that there is going to be a major death that impacts everyone. Although the most likely Parenthood death would be Zeek or Camille, at this point, it could be anyone.