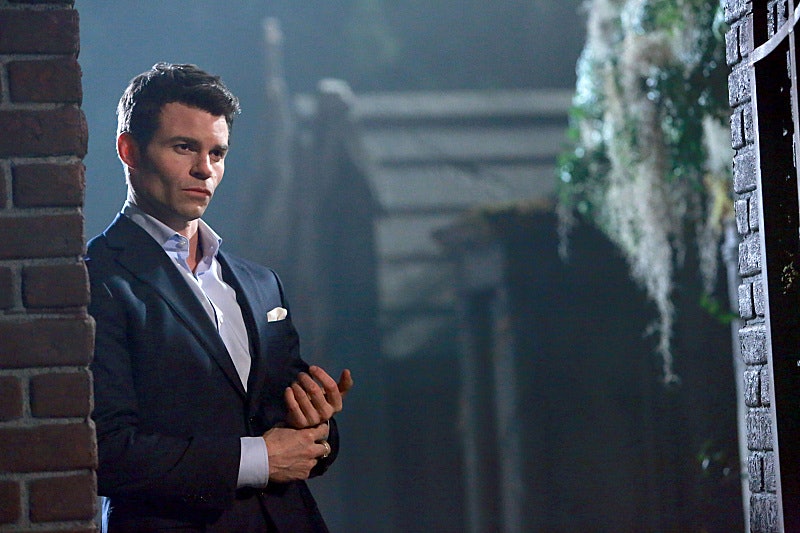 Yup… I'm going there. As someone who’s been a dedicated Vampire Diaries fan since its inception, I have swooned over many, many different ‘shipping pairs throughout the years. The slow burn of Delena… the surprising (but very welcome) build up of Klaroline… even the possibility of a Steroline relationship in Season 6 has managed to pique my interest. (Hey, that's what happens when you have a cast of resentfully beautiful people.) However, there is one TVD match up that I’d honestly never considered before, but now that I have, life may never be the same: a Caroline and Elijah hookup.

I know, it’s CRAZY, right? But does that necessarily make it a bad idea? Granted, the two of them aren’t even on the same show anymore and had very little interaction with each other even back then. But now that a Vampire Diaries and Originals crossover is confirmed, I’d say pretty much anything is possible. (What happens in the Big Easy, stays in the Big Easy.) And while I completely admit that I’d personally prefer a Klaus and Caroline reunion any day of the week (because duh!), I’m at least trying to be open to other possibilities just on the off-chance Julie Plec isn’t, in fact, reading my dream journal. So this idea of a Caroline and Elijah romance has me intrigued.

I mean, why not? Crazier things have certainly happened on these two supernatural shows. Doppelgängers, moonstones, body jumping — you can’t tell me that these sound more logical than a Caroline and Elijah love story. Of course, there’s no way of knowing for sure whether these two would even have any real chemistry together — though when has Candice Accola not had great chemistry with everyone? However, the same could be said about Caroline and Klaus back before they ever started interacting onscreen together. But when they did, we just had to sit back and watch the sparks fly.

It was a match up no one ever saw coming, which is part of what made it so incredibly exciting. From then on out, I was like Tyler who? So why couldn’t that also happen for Carlijah? Here’s why I think this dynamic duo could potentially work:

Her bubbly and outspoken personality coupled with his calm demeanor and sophisticated nature would make for a pretty spectacular team. Whenever she'd become upset or irrational in that lovable Caroline-sort-of-way, Elijah’s composed and steady presence would serve as the perfect counter-balance. In other words, they totally compliment each other.

LOL, well yes, that too, but it's not exactly what I was talking about. They may have polar opposite personalities, but when it comes to important issues regarding family and friends, they’re certainly of the same mind. Both of them are loyal to a fault and would do anything for the people they love. Imagine if they were to share that dedication and devotion with each other? They’d be an unstoppable force.

I love Klaus to death, but his biggest flaw in Caroline’s eyes is that he’s completely selfish and continuously does horrible things to people without ever really showing a shred of remorse. Elijah isn’t like that. Yes, he may have his faults and is far from innocent, but he’s not shrouded in evil and darkness like his brother. Elijah’s kind hearted and truly tries to do the honorable thing when faced with a tough decision. He has all of the allure and power that comes with being an Original, however, Caroline wouldn’t feel plagued with guilt for having feelings for him. Plus, no one can wear a suit quite like this guy.

Haylijah May Be In Trouble

Rumor has it that a potential Klaus-Hayley relationship could flare up in The Originals Season 2, making things a little rocky on the Haylijah front. This would allow Elijah the chance to turn his attention to other things… or rather, other people, which is exactly where Miss Forbes would come in. Klaus’ loss would be his gain.

Their Fan Fiction Is Intriguing

Like I mentioned before, it’s hard to know for sure what these two would be like together onscreen given that we’ve never really looked at them in that way before. However, after tumbling down an Elijah/Caroline fan fiction rabbit hole, I’ve found their relationship to read very well on paper. One writer, simply_aly, has written an entire collection centering around a Carlijah romance, further proving how great these two characters could actually be together, if given the chance:

“It didn’t take her long to figure out why she was drawn to him. He was powerful, she knew that—more powerful than she could ever hope to become—but he never used that against her. Instead, he showed her how to use the powers she possessed, showed her how to become powerful in her own right. He let her be a leader—a player in the game instead of a pawn—and she enjoyed that more than anything. He was both rough and gentle and everything in between, but he never made her feel weak, and she loved him for that.”

I’ll be honest, there’s a good chance that nothing with ever come of this, especially given that this TVD-Original love web is already pretty complex as is. But I’ve learned after all these years to never underestimate Plec’s ability to surprise us. These two could be great together and there’s certainly already a following out there who would love to see that happen. Perhaps this crossover will be a chance to finally give this pair their day in the sun, just as long as they wear protection. (I'm referring to daylight rings, ya pervs!)

And I'm sure Klaus would be totally cool with it.