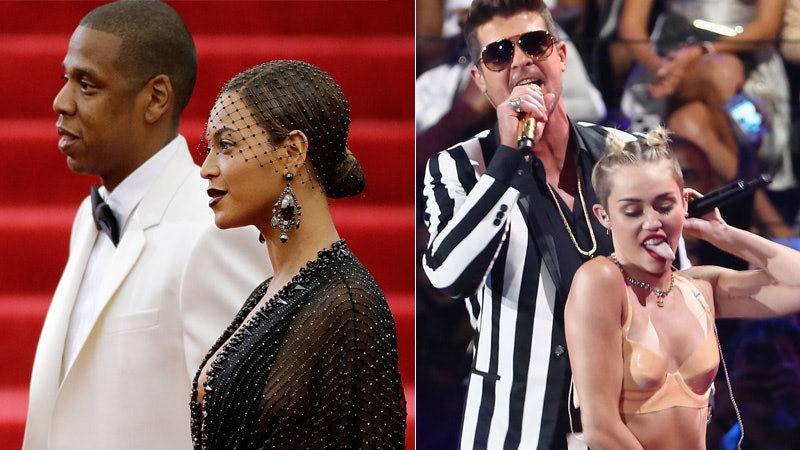 Although we initially anticipated that Beyoncé and Jay Z would announce their divorce as soon as the On the Run Tour was completed, the current word on the street is that Beyoncé will announce her divorce at the Video Music Awards. She's set to perform and, considering that on stage is where she chose to announce that Blue Ivy was on her way, it seems pretty likely that she'll announce this huge marital shake up in some way on stage as well. However, even if you're having your doubts about Beyoncé and Jay Z's marriage, there can be no question that if Beyoncé actually does announce that she's a single lady on stage at the VMAs, we're all going to be shocked.

Now think back. Imagine an innocent time, in 2013, when the sky was blue, the grass was green, and Miley Cyrus had long hair. In a single VMAs performance, Cyrus went from a former Disney star and the face of Hannah Montana to a blond haired, scantily-clad, cultural appropriator who would become the new face of twerking. That sudden transformation was all that anyone could talk about for weeks because we were all busy being shocked, appalled, amused, or just plain confused by this sudden turn of events.

With that legendary moment as the thing that the 2014 Video Music Awards has to top, would Beyoncé's divorce announcement be shocking enough to become the single defining moment of the VMAs? Let's compare the two events.

Sorry, Queen Bey, but Miley Cyrus definitely has you beat on shocking VMAs performances at the moment. Even if you do announce that you and Jay Z are splitting up, everyone's kind of half-expecting it and no one will be truly surprised. Devastated, yes, but not surprised. Meanwhile, we all still remember exactly where we were when Cyrus twerked for the first time: sitting in front of our televisions with our jaws on the floor.