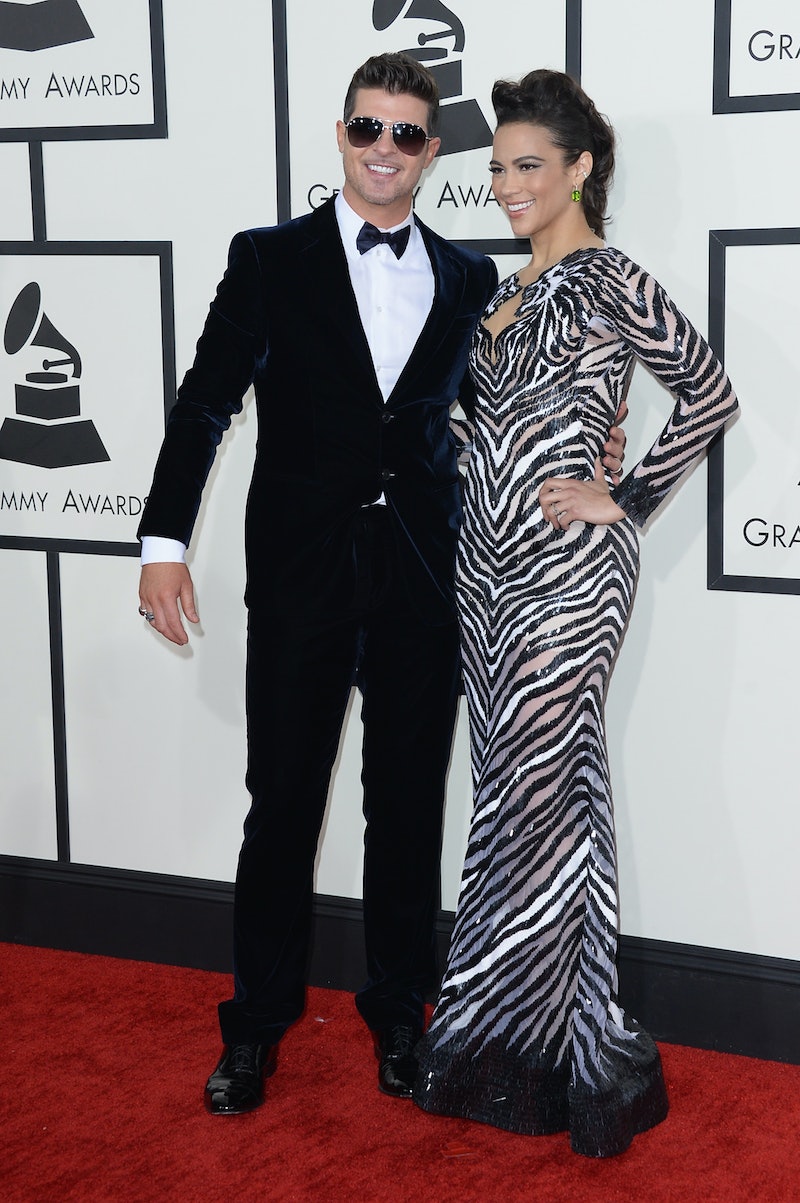 The Billboard Music Awards are tonight, and Robin Thicke is primed and ready to make a grand gesture to win back his estranged wife Paula Patton. He'll be performing an appropriately (though a little unoriginally) titled new song called "Get Her Back" in one of many desperate attempts to reunite with Patton following a split that doesn't appear to be mutual, but is still actually happening (we think?) despite Thicke's denial and Patton's claims that she still has a "deep love" for her ex. Thicke's previous (and very public) pleas and attempts to reconcile with Patton haven't appeared to have worked for him yet, but he doesn't seem to be giving up, hoping that tonight could be his night. Miley Cyrus will be there, and it's all happening.

Though there was tons of speculation that Thicke's VMA performance with Miley Cyrus may have been the singular split for the couple's split, Thicke and Patton have since spoken out individually and revealed that there may have been other, more complicated reasons why they decided to separate, one of which allegedly involves some shady business with a masseuse. Though we may never know the inner workings of the couple's marriage, or what really went down on the Patton-Thicke house after Thicke had his junk twerked upon on TV, here's what we do know about why the two broke up:

A certain butt grabbing incident may have been a factor in the split.

After a certain scandalous photo of Robin Thicke posing with Lana Scolaro (and enjoying a firm, open handful of her butt) hit the internet, Scolaro revealed that the two made out at a club in NYC.

Having a kid is stressful.

Throwing a kid into the mix while fielding cheating allegations may have been too stressful for Patton and Thicke to manage (while staying married).

They met when they were teenagers.

Marrying your high school sweetheart can be a gamble, and it looks like these two might have grown apart as they grew up.

They got too busy for each other.

With Thicke on tour and Patton filming in Canada, the couple's schedule may have become unmanageable given their fast-crumbling relationship.

Miley Cyrus may or may not have had something to do with the split.

There's a lot of conflicting information out there about how Patton really felt about Thicke's infamous VMA performance with Miley Cyrus. Some sources say that Patton was utterly humiliated by the whole thing, and that the performance may have been a factor in the couple's split. Miley Cyrus, however, denies any kind of shady business between the she and Thicke, and Patton says she "didn't get" what the big deal was.

They may have had a three-way that went horribly wrong.

A tabloid reported that Patton and Thicke had been engaging in a series of three-way hookups with Thicke's masseuse, until Thicke decided to make it a party of two without Patton's consent. So much for "spicing things up".

Their marriage was "dysfunctional".

Thicke describes his relationship with Patton as both the "greatest love of the century" and the most "dysfunctional marriage in Hollywood". Though the couple says they "will always love each other and be best friends", it sounds like things just hadn't been working out.

Paula Patton may or may not have gotten really tired of hearing Robin Thicke humming "Blurred Lines" around the house.

More like this
Is Megan Fox Pregnant? MGK Gave A Shout-Out To Their “Unborn Child” Onstage
By Hugh McIntyre
Stormi Just Walked A Red Carpet With Mommy Kylie Jenner & Daddy Travis Scott
By Hugh McIntyre
Doja Cat Wore Surrealist-Inspired Schiaparelli To The BBMAs
By Dominique Norman
Teyana Taylor Channeled Aaliyah In Y2K Thong & Leather Pants
By Dominique Norman
Get Even More From Bustle — Sign Up For The Newsletter