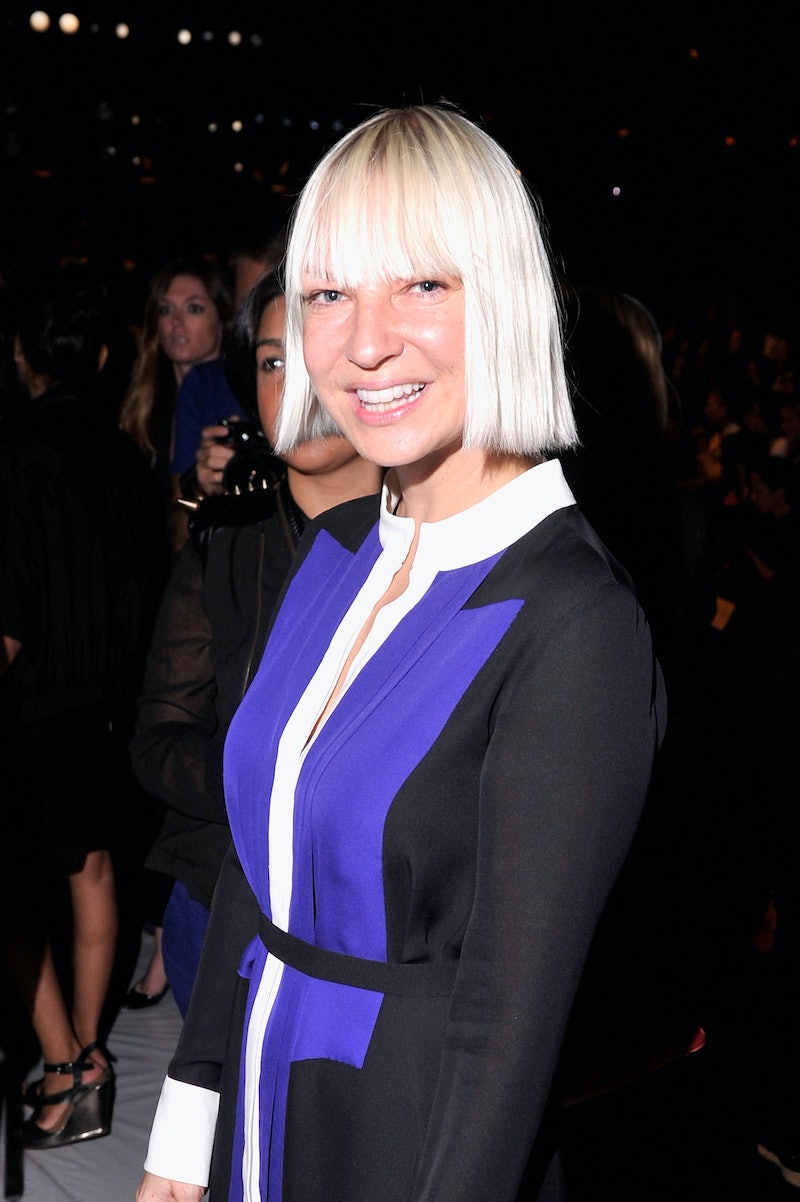 Sia Furler is without a doubt one of 2014's breakout stars. Her latest album, 1000 Forms of Fear , debuted at No. 1 on the Billboard chart when it was released in July, and her current single "Chandelier" is becoming more and more popular on the radio each day. Sia may not want to be famous, exactly, but like it or not, she's famous!

Over the past few years, Sia has written songs for some of the biggest artists in pop music: Beyoncé, Katy Perry, Rihanna, Britney Spears, Christina Aguilera, etc. In doing so, she's also worked with some of pop's biggest producers. Now that she's a proper pop star herself, there are a lot of people who I'd love for Sia to collaborate with on her own music in the future!

Sia worked on half of the songs that appear on 1000 Forms of Fear with producer Greg Kurstin. While Kurstin is a phenomenally talented musician with a diverse discography, the pop music nerd in me would like to see Sia branch out a little bit on her next effort. I'm just giddy thinking of the possibilities!

Here are eight producers who I think Sia should work with on her next album:

Max Martin is a legend, and he's been responsible for shaping the sound of pop music in the United States since the the mid-'90s. You might not even realize how many of your favorite songs Martin had a hand in creating (it's probably a lot). Naturally, I would love for him to partner up with Sia. Over four years have passed and I'm still waiting for a pop song that's as good as Perry's "Teenage Dream" — I think Sia's up to the challenge.

Johan "Shellback" Schuster frequently works with Martin (rumor has it that they produced the majority of Taylor Swift's new album, 1989, together), but he does some fantastic work with other musicians, too. Take Lily Allen's quirky "Air Balloon," for instance. Sia's a lovable weirdo. I could totally see her making something similar work.

Okay, okay, so Lukasz "Dr. Luke" Gottwald also frequently works with Martin (are you seeing a pattern here?), but like Shellback, he does damn good work with other producers, as well. Sia would absolutely slay a power ballad like Miley Cyrus' "Wrecking Ball." I get chills just thinking about it!

OneRepublic lead singer Ryan Tedder is well-known for his thundering, modern ballads (Leona Lewis' "Bleeding Love" and Beyoncé's "Halo," for example), but he's also capable of taking a subtler, more restrained approach. Sia has the vocal chops to pull off a lush, piano-driven track like Adele's "Turning Tables," that's for sure.

Swedish producer Klas Åhlund is probably best-known for his work with Robyn, but he did a track for Perry's latest studio album, PRISM, called "Walking On Air," and I would absolutely explode if Sia were ever to do something similar. I think that Sia and '90s house music could be a winning combination.

Sia co-wrote Rihanna's number-one single, "Diamonds," with Norwegian duo Stargate, but they've never produced any of her solo material. We already know that Sia sounds amazing singing "Diamonds," so something tells me that she could create something pretty special with Stargate for her own album someday. Something like Marina & The Diamonds' "Radioactive," perhaps?

Benjamin Levin, a.k.a. Benny Blanco, has produced some pretty major pop songs over the past several years (Kesha's "Tik Tok," Perry's "California Gurls," Maroon 5's "Moves Like Jagger," etc.), but he's far from a one-trick pony. I think OneRepublic's "If I Lose Myself" more than proves that. I wonder what he could cook up with Sia...

Scottish DJ Calvin Harris is one of the most in-demand producers in the pop world today. Can you even imagine Sia turning out a massive dance track like Rihanna's "We Found Love"?? Just the thought is almost too much for me to handle. Yeah, I definitely need this to happen.