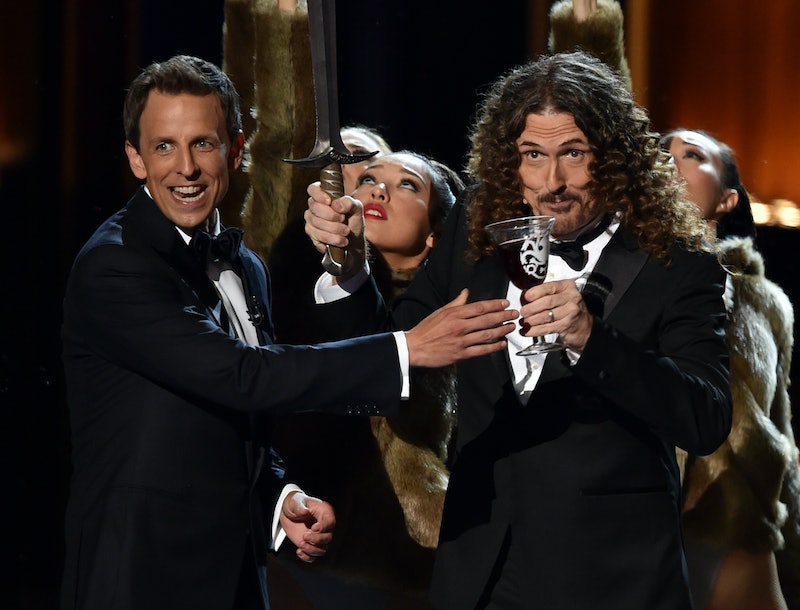 The red carpet has been rolled up, the heels have come off, and the Nokia Theater stage has been mopped of the losers' tears. Yep, the 2014 Emmys have officially come to an end, but that doesn't mean we don't get to relive the best (and worst) moments from tonight's show. After Seth Meyers' opening monologue, the show was off to a bit of a shaky start as far as jokes were concerned, and the rest of the night unfortunately followed suit. True, it's impossible that anyone would ever be able to compete with the epic dance number that Neil Patrick Harris blessed us with at last year's awards, but it's pretty hard to argue that Meyers did his best to bring us an even better show this year, even if he helped move the show along. (An awards show that ends early?! What world do we live in?)

But, taking a deep dive into the 2014 Emmys, how did this year measure up? Let's find out.

Neil Patrick Harris — whether he's hosting the Emmys or dressing his adorable children up for Halloween — sets the bar high in everything he does. And although Meyers is a super funny, super talented comedian in his own right, could he ever surpass Harris' effortless hosting job? As it turns out, as much as I love Meyers... no, not really.

While his opening monologue was cute, Meyers' transitions and introductions during the show left something to be desired. A lot of the jokes during the show fell flat, which is a huge bummer, because I had such high hopes. That said, we all know that Meyers has plenty of room to grow — the dude just started his tenure on late night, after all.

I'll put it to you this way: The monologue was fine. It was kinda funny, but not uproariously so, and that's probably due to the fact that Meyers played it safe. He definitely didn't offend anyone with his mild (and often self-deprecating) jokes, but honestly, he probably would've gotten more laughs out of the audience if he had. After all, Jimmy Kimmel did, and that was just with an award introduction that poked fun at Matthew McConaughey. To Meyers' credit, though, it's a thin line between giving a cringe-worthy monologue and a funny one, and it's probably better to be closer to the funny line without making his mark than the cringe. Remember how hated Ricky Gervais was with his infamous Golden Globes hosting stints?

Though not exactly a performance, the Billy on The Street segment in which Billy Eichner and Seth Meyers quizzed people about the Emmys was far and away the funniest part of the night. Best of all? The Mindy Kaling joke about how not only did the Academy not give her any nominations, but they also got her up early to announce a bunch of nominations she wasn't a part of. How did this hilarious woman not receive any nominations?

Weird Al's rendition of popular show theme songs, though? We put far too much time into the Emmys to be treated to a time-wasting segment that only left my ears bleeding. That said, the George R.R. Martin moment — during which the author was handed a typewriter to finally finish his A Song of Ice and Fire series — redeemed the performance a little, but not enough to repair the emotional scarring that was caused in the first place.

The most heartbreaking part of the evening was, of course, when Sara Bareilles took the stage to sing her amazing version "Smile," as the Emmys reminded us of all of the incredible talent we lost this year. (Can anyone ever make it through these things without crying?) And, afterwards, Billy Crystal followed it up with a touching tribute to Robin Williams that was more than fitting of the man who, as Crystal noted, had "relentless energy" that kept us all entertained, and laughing.

The Winners — And the Losers

I almost started a boycott last year when the 2013 Emmy voters failed to award Steve Carell for bringing The Office's Michael Scott to life, but I'm glad I didn't. Because this year, I was a little less mad with the Academy's choices — but still pretty pissed when Jim Parsons managed to score in that same category that he stole (stole!) from Carell last time around. Couldn't give Louis C.K. a deserved win, Emmys?

But that win was easy to put aside when you remember that Modern Family — a series that has long worn out its welcome when it comes to TV fans — managed to beat Orange is The New Black (that's right — the innovative, addictive, hilarious Orange Is the New Black) in the comedy category. Now that is something to fume about — almost as much as Kerry Washington's snub in the Lead Actress in a Drama Series category.

Sigh. I was little nervous this might turn into the Modern Family Awards once again. And it totally did. Everybody can go home now.

My favorite presenters of the evening? Zooey Deschanel and Alison Williams. Two of my favorite females in television, on stage together? Why hasn't this happened before? My fingers are crossed that afterwards, they decided to guest star on each other's shows. What? A girl can dream!

Still, you also have to hand it to awards show pro Gervais, whose jokes about losing in his category — Lead Actor in a Comedy Series — actually managed to bring laughs to the theater. In a room full of such talented folks — many of whom either write for or act in major comedy series — how is it possible that so many of them made such bad jokes in such a short period of time? (Looking at you, Jay Leno.)

The Feminism of It All

I almost don't even want to acknowledge it, because it was that horrible, but I must: That Sofia Vergara moment. From where I sat watching the awards ceremony, it did not seem there were nearly enough people in the theater noticing that the Emmys actually put a woman on a spinning platform as if she were a Lexus at an auction as Academy CEO Bruce Rosenblum stood beside her, actually inviting people to stare at her ass? Who came up with this idea? Who okayed it? And why didn't Sofia (or any of the women undoubtedly involved in the production of the Emmys) object to it?

It's not all bad, though, guys. Later, after her win for Lead Actress in a Drama Series for The Good Wife, Julianna Margulies noted, "What a wonderful time for women on television," and she's right to salute the status of women in TV. There are more shows starring or focused on women — or created by women — than there has ever been. So even if someone, somewhere, made the misguided decision to put Sofia Vergara on a rotating platform for about three solid minutes of airtime, things are getting better.

There are a lot of white people at the Emmys, y'all — and they were all winning the awards. Yes, shows that celebrate diversity (like Orange is The New Black) ended up getting snubbed. Instead, this year at the Emmys was the year of white men as much as it was the year of Modern Family, serving as a stark contrast to Sunday night's VMAs, which showcased and saluted several diverse artists. To say this is disappointing is a huge understatement.

Aside from Julia Louis-Dreyfus' intense kiss with Bryan Cranston, this year's Emmys was a bit anticlimactic. Many of the presenters were off their game, and a lot of the funniest people in Hollywood were, somehow, really unfunny. I found myself missing Monday night's VMAs. Where's Nicki Minaj and her "Anaconda?" I never thought I'd miss Nicki Minaj, but here I am.

And as far as next year's awards go? Get better writers, Emmys. Don't be afraid to push the envelope a bit more. Oh, and a quick note to next year's producers: Women aren't just something pretty to look at, and we would, collectively, appreciate if you'd keep that in mind next time around.

And, um, more Beyoncé. I noticed that this year's awards didn't have any.

More like this
Jurnee Smollett’s Heart Is Healing
By Rebecca Carroll
Why Sadie Sink Is Hopeful Max Will Return In Stranger Things Season 5
By Brad Witter
'Stranger Things' Star David Harbour Has This Actor In Mind For A Hopper Spinoff
By Alyssa Lapid
What Working At Marvel Is Really Like, According To A 'Ms. Marvel' Co-Creator
By Gretchen Smail
Get Even More From Bustle — Sign Up For The Newsletter