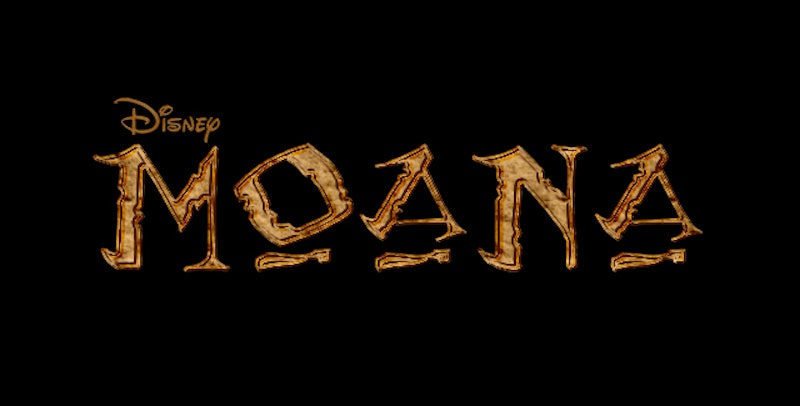 In case you haven't heard, Disney is about to introduce its first Polynesian princess with Moana, an upcoming film set for a 2018 release. It tells the story of a sea-faring girl named Moana Waialiki who goes on an epic journey to save her family when her mother and father, the chief, go missing. In other words, Moana is going to add the fifth princess of color to the Disney princess line up and that's something to be excited about. As Disney proved with the success of their 2013 film Frozen, turning old conventions on their head and ushering in a more feminist-friendly fairy tale enhances the Disney magic instead of destroying it. In light of Frozen, my expectations are set incredibly high for Moana. I know what you can do now, Disney. I won't accept anything less.

If Disney is looking to repeat the success of Frozen with Moana, then they're going to have to put in the effort to ensure that Moana is a culturally sensitive feminist tale. It's being done by the same directors who did Aladdin and Princess and the Frog and both of those movies weren't exactly culturally sensitive, even if they did give princesses of color some good representation. To make sure that Moana is the movie we're all hoping it will be, here are seven suggestions for what Disney should be sure to include.

The only known member of the Moana cast so far is Moana Waialiki herself. Frozen broke the mold by having not one but two female leads who had equal screen time and I'd love to see the same thing happen in Moana. When Moana takes off on her journey to save her parents, I'd love for her to take her best female friend with her since she doesn't have any sisters. Ladies loving each other as they kick butt and take names? Yes, please.

Don't think that getting Polynesian voice actors doesn't matter because they won't be seen on screen. Make the extra effort to give all of the characters authentic Polynesian voices by casting people who actually grew up in that culture. I know the temptation to cast mainstream actors who might get the film more buzz will be really great, but remember that this is your chance to go the extra mile for authenticity, Disney. Don't drop the ball here.

I know this should probably go without saying, but just watch Aladdin again and see how capable Disney is of telling a great story without actually doing much research at all. I'm not saying that they have to sacrifice the golden rule of good storytelling to make sure every last detail is 100% accurate, but they should definitely at least try to get as much right as they can. I mean, that should just be a general rule for Disney to stick to from now on.

4. A Shark Side Kick

Sharks get a bad rap in fiction for creatures that are so popular with the public consciousness that we've made a whole week out of celebrating their existence. Imagine how much cooler Moana would be if she befriended a shark. Imagine how badass you have to be to befriend a shark to begin with. They made an alligator into a hero in Princess and the Frog, so why not do the same for sharks?

5. Moana having a new figure.

Well, new for Disney. You see, every single princess in their line up is basically a size two and we all know the average woman is nowhere near that thin. Moana could be their chance to start introducing full-figured princesses to the line-up so that little girls and boys know that pretty really does come in all different sizes. In fact, I'm surprised they haven't already started doing this.

One of the best things about Brave is that Princess Merida was not having this whole romance thing. After shooting for her own hand, she largely ignored her princes in favor of repairing her relationship with her mother and looking after her father and brothers. Since Moana's film is also about family, could we give that a strong focus? If more attention is paid to developing her romance than to her relationship with the parents she's looking for, I will be crushed.

It's rumored that one of the gods that will be appearing in Moana is Pele, the goddess of volcanoes, and I just want to make sure that is definitely going to happen. Let's talk about Pele for a second. She lives at the top of one of the world's most active volcanoes, she has several volcanic phenomenons named after her, and she has major beef with the Hawaiian goddesses of snow. If that doesn't sound like a great supporting character, I don't know who does.