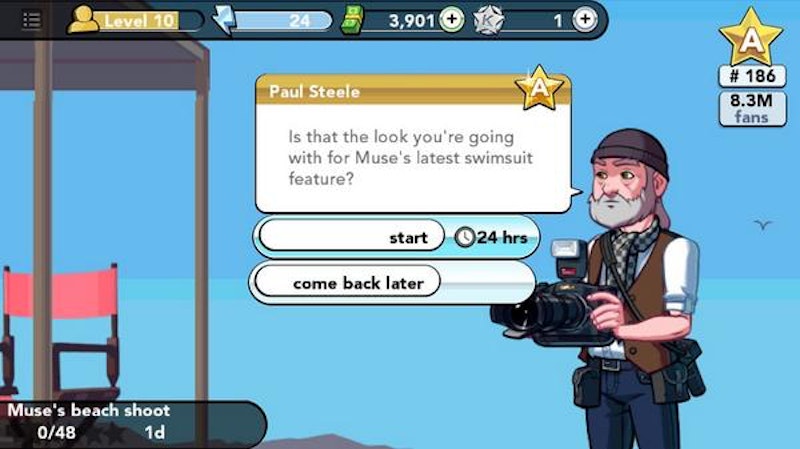 If you've recently updated your Kim Kardashian iPhone game, you know that Kim has added new clothes that take no K stars to purchase. In fact, Kim will give you the beach-y garment and new hairstyle for free! Well, provided you complete three 24-hour photo shoots in a row, that is. Anyone who plays Kim Kardashian: Hollywood knows that 24-hour events are the actual worst. Compared to 8-hour or 3-hour jobs, which you can finish faster if you play the game right, 24-hour gigs actually take a whole day to complete, and even then you might not get five stars on the assignment. How can you when a full bar of energy fills about an eighth of one little blue star?

Spending three solid days on those photo shoots was a special kind of hell, and I don't want anyone to suffer like I did. Plus, if you don't play it right, you might not finish your shoot in time and without completing all five stars, you could lose millions of fans.

But there are ways to complete a 24-hour photo shoot faster and with five stars, so I'm going to share my six secrets with you.

DON'T START ONE RIGHT BEFORE BED

It takes about three hours for your energy bar to fully recharge. That means if you start a 24-hour shoot right before bed you waste about three complete recharges while you're sleeping. Instead, play during the day so every three hours you can use your lightning bolts to knock out that photo shoot in about eight hours instead of 24.

PLAY THE SECOND YOU WAKE UP

Every minute counts when you need that much energy to complete a 24-hour shoot (about 276 bolts). Use your full store of energy right when you get up so you're not playing late into the night trying to finish what you should have started earlier.

TRAVEL AROUND THE WORLD

You can score 13-17 lightning bolts by traveling to each of the game's locations and clicking on their hidden energy spots (pigeons, signs, bushes). If you make that trip a couple of times you can restore your energy in 15 minutes instead of three hours. It costs money to make the trip, but 24-hour shoots reward you pretty generously, so you'll make most of it back when you're done.

TAP ON EVERYTHING YOU GET

Tap on hidden energy spots, tap on the rewards those spots give you, tap on the rewards you get for completing tasks during the photo shoot (like "check makeup" and "pose"). Every time you click a dollar bill, people point, star, or lightning bolt, it drops the time needed to recharge your energy by five seconds. Like I said, every minute counts when trying to complete a 24-hour shoot within those 24-hours, so get busy clicking.

Turn on your Kim game notifications or set an alarm so every three hours you'll be ready to use your full energy and then get back to collecting again for the next three hours.

If you wear an expensive outfit to the shoot you will get a bonus star. It can save you hours of work later, so even though a nice outfit may cost some K stars, it's worth it in the end, trust me.

24-hour shoots are never fun, and very nearly never worth it. But if Simon or Maria forces you to do one, at least now you know how to make it go by a little faster.