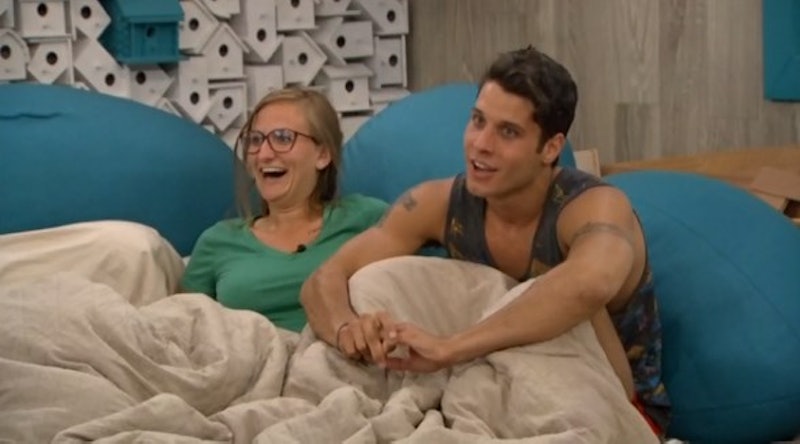 While the Big Brother showmance of the summer might have been between Frankie and Zach, there has been a lot of attention on the "flirtmance" of the summer, between two other Big Brother houseguests, Christine and Cody. The two of them are constantly affectionate towards each other, stroking the others leg, or hand, rubbing each other's backs... It's pretty strange, I'll admit that much. And while I don't think it's fair to criticize Christine's marriage to husband Tim — what happens or doesn't happen once Christine is out of the house is strictly between them — a lot of viewers have taken to social media to discuss the relationship between Cody and Christine.

And then everyone's favorite shade-throwing robot, Zingbot, entered the Big Brother house and called Cody out for his flirtmance with Christine, which caused Christine to get really upset. And ever since Zingbot brought up the relationship between the two, the rest of the houseguests have been talking nonstop about what they think of their fellow houseguests' behavior.

It doesn't surprise me that the houseguests are taking notice. What else do they have to do all day other than analyze the actions of the those around them? Check out what the other houseguests are saying about Christine and Cody's relationship.

Victoria, who is usually a little oblivious to what is going on in the house, is one person who is really taking note of what is happening.

Even though Nicole was out of the house for a week, she has noticed the growing amount of touching between Cody and Christine, as well. Will Christine's former BFF mention how it might be coming off to Christine, though? Probably not. After all, if people see Christine and Cody as a final two deal, that will only help Nicole's individual game.

Despite his own past creepy attempt at a showmance, Caleb is definitely one of the most vocal in terms of how much it "disgusts" him.

Sometimes it's what you don't say, Derrick. While Derrick tries to keep out of people's personal relationships in the house, his comment says a lot.