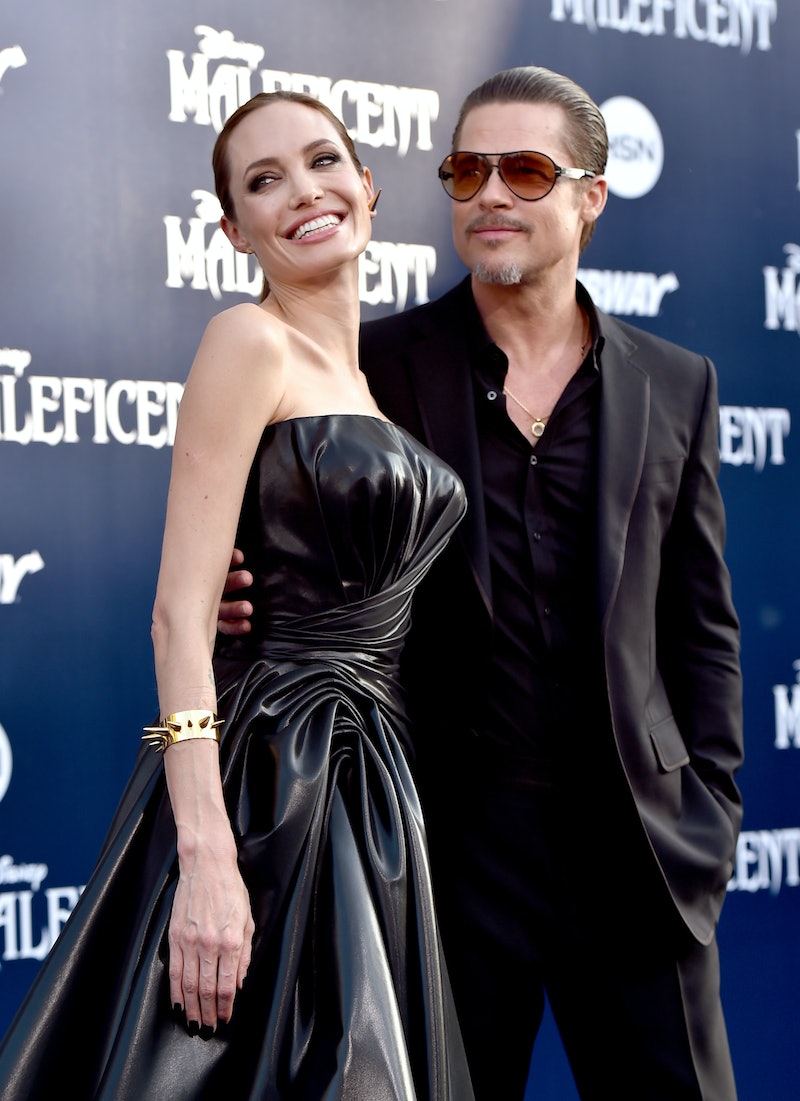 It finally happened, Angelina Jolie and Brad Pitt are officially husband and wife. On Saturday, the parents of six got married in a supersecret French wedding ceremony. Anyone who's anyone knows this is big news, especially because during their nine-year relationship, Pitt and Jolie remarked several times that they weren't going to be getting married anytime soon. Them walking down the aisle is about as surprising as George Clooney getting engaged.

Even after the couple got engaged in 2012, they stayed coy about their actual wedding plans, leading many to believe it would simply never happen. But it seems all their comments about not walking down the aisle were just bluffs, because last weekend, the pair wed in a small ceremony in Chateau Miraval, France. So romantic, especially when you consider that Pitt once said, "Being married means I can break wind and eat ice cream in bed."

I hope the happy couple celebrates their honeymoon with slightly less flatulence, though ice cream is always a good idea.

And so here we are on this legendary day with a married Brangelina, despite all the times they said they weren't going to get married. And to show you just how far they've come since coupling up in 2005, here are the 13 times they talked about not tying the knot.

At a press conference in Namibia, Jolie explained that their children were the couple's priority, not a wedding. "The focus is the kids, and we are obviously extremely committed to the children and as parents together. So that kind of says it for us, and to have a ceremony on top of it is nothing."

Pitt made his infamous statement to Esquire about why he had no marriage plans, saying: "Angie and I will consider tying the knot when everyone else in the country who wants to be married is legally able."

For an in-depth Vogue interview, Jolie explained that she didn't plan to marry Pitt because marriage doesn't make a relationship better. "We both have been married before, so it's not marriage that's necessarily kept some people together," she said. "We are legally bound to our children, not to each other, and I think that's the most important thing."

In an interview with Marie Claire, Jolie reiterated that marriage doesn't a strong relationship make. "Brad and I have never discussed it [marriage] in detail, but I would assume – because we both went down that road before – that its not a contract or the ceremony that makes you feel solid," she said. Instead Jolie remarked that what makes a couple work is raising a family. "It's hard work and the exhaustion and the children that really make you solid."

To Italian Vanity Fair, Jolie remarked on how she and Pitt had bucked tradition from the start. "Usually people fall in love and everything revolves around the ritual of marriage. Children are an afterthought," she said. "We did everything backwards."

Pitt told Parade that he stood by his decision not to get married until gay marriage was legal.

I have love in my life, a soul mate, absolutely. When someone asked me why Angie and I don’t get married, I replied, "Maybe we’ll get married when it’s legal for everyone else." I stand by that, although I took a lot of flak for saying it — hate mail from religious groups.

Jolie announced that she and Pitt not only had no plans to get married but were in an open relationship. "Neither Brad nor I have ever claimed that living together means to be chained together," she told Das Neue magazine. "We make sure that we never restrict each other."

Jolie cleared up some rumors in an interview with Vanity Fair saying that she wasn't pregnant or adopting at the moment. She also commented on the marriage gossip, saying there was "no secret wedding" in the works.

Pitt lashed out against tabloid marriage rumors to Parade magazine.

I mean, how many stories have you read that aren’t true, stories about me and Angie being married or fighting or splitting up? And when we don’t split up, there’s a whole new round that we’ve made up and we’re back together again! We’ll get married when everyone can. We’re not splitting up. And we don’t have a seventh child yet.

On Good Morning America, Jolie says she tells her children that she is committed to Pitt, but that didn't necessarily mean they were getting married. “We’ve explained to them that our commitment when we decided to start a family was the greatest commitment you could possibly have. Once you have six children, you’re committed.”

TMZ paparazzi asked Jolie if the gold ring on a certain finger was a wedding band. "No, it's not," she replied, shutting down the rumors of a secret marriage ceremony.

Jolie remarked to Good Morning America that things were still far off. “We don’t have a date, and we’re not hiding anything, but we really don’t know," she said.

Just a mere three months ago, Jolie said the couple wasn't heading down the aisle anytime soon. "We don't have any plans to get married at the moment," she told USA Today. "Nothing is organized. Nothing is ready. I don't have a dress."

It seems like in the end she did find a dress and even made it down the aisle. Congrats to the couple and to all the tabloids that were finally, finally right.